It’s been 17 years since The Stone Roses limped to their inevitable demise. In that time their legacy spiralled to the point where ‘What the World is Waiting For’ became less of a snappy sound bite and more of a demand. When the reunion was finally announced at a press conference in October 2011 collectively a generation and beyond brimmed with relief and excitement.

Made of Stone is the story of what happened after that now legendary press conference. Director Shane Meadows (Dead Man’s Shoes, This is England) was hand picked by the band to follow the band from rehearsals through to the their home gigs at Manchester in front of 225,000 people

Such is continued obsession with the band the film premiered simultaneously across the country, selling out each chosen venue.  Most venues were independent cinemas dedicated to the less mainstream side of cinema and thus inherently being cooler.

As we entering the local theatre you could see this move had paid off well. The fact that booze was not only permitted but by looking at the crowd actively encouraged gave lend to a pre gig feel which suited the occasion perfectly.

As a slightly wobbly crowd entered their seats there was at sense of excitement air which reached fever pitch at the lights dimmed. This momentum was slightly diminished as the fabled simultaneous broadcast began which essentially saw Edith Bowman pester uninterested looking people on a sparse red carpet.  After a good half hour of this tedium we finally got a glimpse of the band themselves (minus Reni, more on that later) entering the flicks. After bizarrely playing ‘Blue Monday’ by New Order there was a quick, introduction by Shane Meadows and Mark Herbert it was time for the main event. 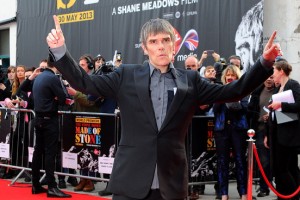 The film begins with footage of the band entering stage to the sound of ‘I Wanna Be Adored’ at the Heaton Park homecoming gigs. Watching Ian Brown swagger in front of an adoring crowd (pun intended),  before taking a picture of himself on a camera handed to him by a fan in the front row makes for an opening truly worthy of the band themselves. Summed up in a less than a minute we feel, hear and see everything the Roses are about; musical titans, generational icons and proper ‘one of us’ type lads. The opening is stunning and worthy of the entry fee alone. 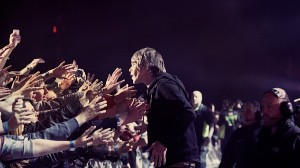 From the grand beginnings we are transported to more humble but no less inspiring settings of the reformed band rehearsing in a small practice room. Splitting the screen between the four members and watching them interact whilst finding their feet again gives a sense of wonderful voyeurism. Nods and smiles between the foursome as they get to grips with songs we’ve heard a thousand times feels magical and you wonder how they came to lost what they had. Reni taking the piss out of Ian’s tiger hoody is a particular highlight.

Going back and forth to this scene throughout, the rest of the film is split between 3 other parts; early footage of them band, on the road footage of the mini tour leading up to Heaton Park and most tellingly, the fans themselves telling their tale.

Old footage of the band shows a genuinely heart-warming view of 4 young friends getting together and creating magical sounds that would change a generation. Watching these fresh faced scallys larking about in the studio leaves a bittersweet taste knowing how it would turn out. However you can’t help yourself being encapsulated seeing the cocky fresh faced lads excited by the music that they were producing.

A good chunk of the film is made up fans clamouring for tickets to the off the cuff comeback show in Warrington, the birth place of Ian Brown, at the Parr Hall. As words spreads of the gig we follow people literally running to venue in attempt to get the free tickets available.

Meadows decision to shoot outside of venue is a masterstroke and makes for the heartbeat of the film. Watching the emotions of those succeeding in getting tickets as well as those failing gives more meaning to what the band entails to people than any number of talking heads or written words ever could. A middle aged man offering his car then his house in exchange for a ticket gives an indication of the lengths people were willing to go to. In a more humorous moment a cement clad builder apologises to the owners of house he has had to abandon where he was only half way through knocking a wall through. Brief footage of the Warrington gig shows the meaning of ‘collective ecstasy’ if there ever was one (and previous to this sentence I’m not sure there ever was). 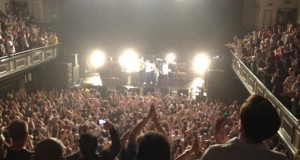 The Warrington scenes did raise a question to me about how much of a Roses nut Meadows actually is however. In his interviews leading up to the film we were continuously reminded of how much Mr Meadows loved the Roses and how this was his dream job. At Warrington he talks about this being “his Spike Island” moment. He later stated he gave his ticket away at the time of Spike Island, due to having a bad acid trip the previous night and therefore never got the chance to see them. If he is so much of a fan, what happened to the whole of The Second Coming tour he managed to miss? That’s one long acid trip.

The other third of the film constitutes of the mini European tour building up to the building up to the Heaton Park gigs. This should have been the coup de grace of the film. Shane Meadows was given unprecedented access to a notoriously media unfriendly band and should have grabbed it with both hands. Unfortunately he lets himself down badly. Before the film an interview was given with the director, in it stating that he isn’t a documentary maker but took on the project being such a fan of the band. He is proved right on both accounts.

The “drummers a c*nt” incident from Amsterdam would have been gold to any documentary maker worth his salt but Meadows turns the camera on himself stating he want to give the band their privacy and refused to film any of the fall out. It’s not that the audience is baying for blood here, I don’t think anyone in the audience wanted to see Jeremy Kyle style arguments. However it would have provided an invaluable insight into the dynamics of the band, showing how tensions are dealt with now and perhaps giving an indication of how it unravelled before. It also should be noted that Meadows chose to put the footage from Lyon in before the Amsterdam incident when in fact these gigs happened the other way around. Only he knows why, but this inaccuracy appears only to have been done to raise some drama around the whole episode in Amsterdam, which we all know was a load of nonsense anyway.

No new interviews with the band are given either and for all the joy and charm of watching the band practise together in the rehearsal room you’d love to hear from the horses mouths what makes this band tick along with all the other how’s what’s and where’s. Part of the bands image has always been some part of the mystique and whilst a fan can respect that, perhaps a documentary maker shouldn’t.

The film ends with a blinding version of Fools Gold from the Sunday night at Heaton Park, which through the cinema speakers sounded as good as anything probably ever has in a picture house and gives some footage that will be cherished by Roses fans.

Although often brilliant and awe inspiring the film ultimately feels like something of a missed opportunity. And if this is to be the definitive Roses documentary you’re left with that familiar of feeling of, ‘it was brilliant whilst it lasted but it could have been so much more’.