Too often I go to gigs where the advertising on the part of the venue is almost non existent, the turn out disappointing and disheartening, and – even when you arrive – it is unclear as to what’s going on. This was the case at The Water Rats on Saturday night: whilst VH1 was blasting out in the pub – which I don’t think anyone there wanted to listen to – some fantastic bands were playing to a practically empty, closed off room. This saddens me a lot and I wish I could do something about it. On Saturday, one band had travelled from Denmark for this event and another, my personal favourite, all the way from Burton, Derby….

Having been left pretty depressed by the cancellation of Jabberwocky Festival, I was cheered to discover that a fantastic upcoming band had a gig at the infamous Water Rats to fill the Neutral Milk Hotel-shaped void I now felt. All was not lost, after all.

I’ve seen 5 Days Of November once before, alongside my beloved Eight Rounds Rapid at The Sebright Arms, and had been left extremely impressed by the immense wall of sound created by these two guys. Woody Arnold and George Mills used to be part of a four piece, but now 5 Days Of November have been reduced to just the two of them – Woody, the once lead guitarist, had to teach himself drums in May and so the band as we now know it was formed. Seeing them live, however, you could be forgiven for thinking it had been this way for years; as Arnold pounds away at his kit, the band’s immaculate, pummeling rhythm is one of their most impressive features. 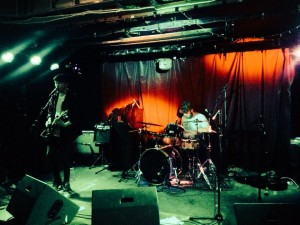 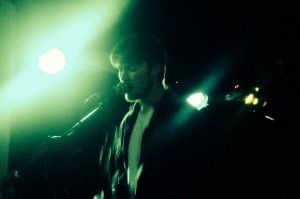 As they deliver their fantastic, energy-fuelled set, it becomes evident that being a two piece really does work in their favour. As each thrashing song is blasted out, Mills and Arnold appear to gel perfectly, with a togetherness that is unmatched: their ability to bounce off each other creates tight riffs and a unique intensity. The last time I saw them, for instance, Woody’s bass drum broke mid-song and – as he tried to fix it – George just continued to deliver impressively improvised riffs and, despite not being able to fix the drum, they continued with their vigorously powerful set. Much like tonight as – despite playing to a room of what can’t be more than eight people – they put all the energy, charisma and motivation into their set of a sold out arena tour. I soon forget the emptiness of the room, so utterly captivated by the alluring vivacious force of their thrashing, impassioned rock. As distorted riffs, pounding beats, catchy melodies and delicious harmonies ooze from the stage, I am left completely hooked on this inspiring, compelling duo.

Obvious comparisons of the increasingly popular duo Royal Blood aside, 5 Days Of November are a unique talent in their own right. With Mills’ distinctive, impassioned nasal vocals, their intense flawless rhythm , an energy and motivation that is unmatched, here is band that will soon be blasting onto the festival scene with a buzz.

So, do me a favour and go to see this band next time they’re in town – you won’t regret it, I promise!