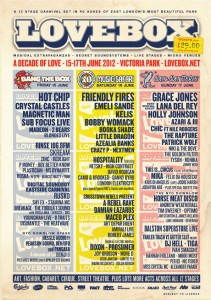 Without wanting to sound like Vic Meldrew, as I get older the thought of dossing down in a sauna of a tent, surrounded by teenagers and students dressed in ‘onsies’ going off their box on warm lager, M-Kat and rubbish legal highs whilst shouting ‘bollocks’ repeatedly at a festival doesn’t appeal to me as much as it used to. Not that there is anything wrong with it, it just has a certain shelf life.

Therefore the idea of being able to walk along the canal by my gaff and end up at the festival gates in 10 minutes, and the same back, was certainly appealing for the non camping Lovebox 2012.

The line up didn’t seem as strong as the previous years have been, especially with it being the 10 year anniversary celebrating ‘A Decade of Love’, however wack a load of like minded people in a field, ply them with vastly over priced beer and cider (£4.50 a CAN – I shit you not), illegal highs and some pumping dance tunes and your pretty much guaranteed to be onto a winner. And that was pretty much the case….

So then, Friday. The first thing of note was that the forecasted downpours didn’t occur. This was good news, obviously. However, looking at the size of the crowd it looked as if plenty of folk maybe had anticipated getting drenched and had decided to give this day a wide berth. The crowd is normally lower on a Friday, however it seemed like a bit of a ghost town.England’s Euro 2012 game withSwedenprobably didn’t help matters either. Those who made the effort though were not disappointed.

Having done a reccy of the site we took in a bit of Ms Dynamite (eee heeee) for old time’s sake, we had a spy at Magnetic Man followed up with Crystal Castles. All very well and good. I managed to squeeze in a bit of the footie before some daft bint fell face down in front of me and preceded to state that my face “scared her into a fall”. Now, I’m no oil painting, that’s for sure, but I’m hoping my face doesn’t offend people that much, and she was just off her nut. Here’s hoping. Some reckless dodgem driving followed then we went to check out headliners Hot Chip. You could literally walk to the front of the stage before they came on, a sign of how poorly attended it was, although it did fill up during the set.

Hot Chip were top, and despite my prior dubiousness, they were worthy headliners. They combined tunes from their albums throwing in all the hits and the odd surprise such as Fleetwood Mac ‘Everywhere’ cover and were unanimously very well received with Sarah Jones from New Young Pony Club slotting in nicely on the drums.

It was also pointed out to me that one band member in Hot Chip is the complete spits of my mate Craig. Now I’ve never seen these two in the same place at the same time and I am now lead to believe that he is in fact Al Doyle….

Attendence wise Saturday was a complete contrast. The place was rammed. Now although this may have helped towards some of the atmosphere it also has it’s down falls. Mainly getting one of those £4.50 cans. Every normal bar was rammed so we decided the VIP bar was the only option and after the odd push and shove we had 5 ciders and a Jaeger bomb in our possession.

The other down fall of a bigger crowd is the heightened potential for bell ends to be in attendence. ‘Festival chic’ gets right on my tits too, of which said “bell ends” love a bit of.  Now, I’m all for wearing decent clobber and taking pride in your appearance, however, the majority of the crowd here looked like Topshop manikins with Hunter wellies on and shit shades, or, the only way is Essex extras, also in shit shades all bouncing around on cheap MDMA. I couldn’t help but think these personality defunct drips were here more just so they could update their facebook account with a photo in a straw hat and a glow stick, as they were to have a good time to the acts and DJ’s on offer. I must add that this is not applicable to everyone, but lovebox defiantly attracts a bit of a weekend millionaire nob head crowd.

Fuck, I actually do think I am turning into Victor….  Rant over, onto the music… 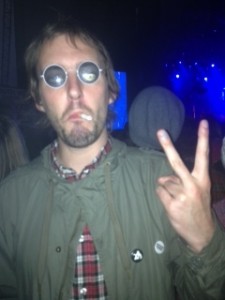 First port of call was the ‘Hospitality’ tent. This place was rammed full all afternoon and jumping. You can’t fail to get into the vibe in there, although the introduction of some grime fella meant my time was up.

Kelis  was an unexpected crowd pleaser of the day with the crowd loving her milkshake mash up which included, as she has done for a while now, dropping in bits of ‘Smells Like Teen Spirit’ and ‘Girls Just Want To Have Fun’, whilst also throwing in ‘I feel love’. Donna Summer due to play this festival before her untimely recent death. Nice touch Kellis, kidda. Her set ended with new Skream produced single ‘Distance’, and went down like a granny on ice….

On the main stage Maverick Sabre battled with the wind, but still managed to impress, as did Brit Awards critics choice Emile Sande, fresh from Coldplay support dates. Big things are expected from her. Whilst over the Other Stage we were impressed with Dot Rotton and Stooshe.

After another mission to get stocked up on ale, we then took in festival founders Groove Armada who came on to a predictably heroic welcome. They rattled through all the favourites and there was an extra special surprise when they brought on Candi Staton to do ‘You’ve Got The Love’. As you’d expect this united everyone, people on shoulders, beers going flying, and a mass sing along. Good shit. One last pit stop to stock up on ale and then headliners Friendly Fires were on. I’ve never been overwhelmed by FF, and this performance did nothing to change my view, although the rest of the crowd seemed to be up for it.

And that was it. We couldn’t make Sunday which was a shame as I would’ve liked to have seen Chic with Nile Rodgers, but there will be other times for that. Overall a good couple of days out in my local park and I’ll be back next year, as long as those Victor Meldew moments don’t get the better of me that is….