Its been almost a year since Arctic Monkeys released their all conquering latest album AM and it’s safe to safe to say that Team Monkey must be pretty damn pleased with how those 12 months have panned out. After an explosive start to their career it seemed that the band were destined to have a very respectable career on that mid-rung level, retaining a core fan base which is boosted when playing live by those wanting to hear the early stuff. Never being ones to stick to the script however, ‘AM’ managed to do the rarest of deeds in becoming a critically acclaimed album which also managed to appeal to a mass mainstream audience whilst making their way to the top of the Radio 1 overall playlist and cracking America in the process.

With the album came a new look for the band too. The everyman student uniform of hoodies, jeans and knackered converse was ditched in favour of slick 50’s inspired suits with the haircuts to match, and in the process turning Alex Turner from average lad to rock god. With all this in mind it’s fair to say I was more than excited to see them close Leeds festival on what is to be their last live date before a well earned break. 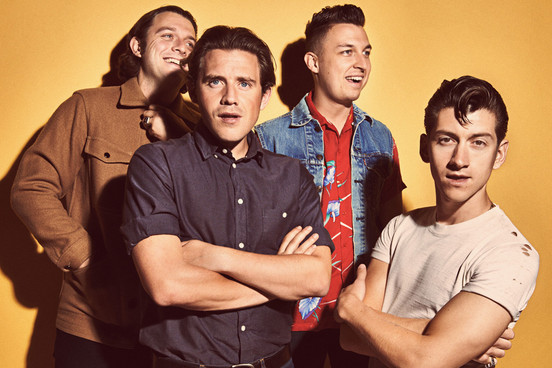 Not long after Jake Bugg finished a good if not spectacular set the now iconic ‘AM’ cover was lowered behind the stage, which may as well have stood for Anticipation Mania given the buzz being generated in the crowd. Unfortunately the warm up mix tape of songs, presumably picked by the band, failed to capitalise on this excitement with the selection being decidedly slow tempo and downbeat numbers which noticeably dampened the natural energy. Whether this contributed to a somewhat lacklustre crowd reception is open for debate.

Still, when you have the giant riff of ‘Do I Wanna Know’ to kick things off your main worry is whether you will wake the dead, never mind an adoring audience and the crowd react accordingly. Following that up with the mind melting drumming of Matt Helders on ‘Brianstorm’ before rolling out first album classic ‘Get On Your Dancing Shoes’ and we are well on our way.

‘Arabella’ calms things down a little and whilst it’s greeted with the same enthusiasm as the band’s early hits (as are the majority of ‘AM’s’ offering), the natural slower groove seems to see the audience lose at least a portion of that excitement again which from where I’m standing, is never fully recovered. Of course this could be the natural affects of being at the back end of a 4 or 5 day sleep deprived bender which can be understood. However it’s more evident from the apathetic reaction of the lesser known mid period songs that this is very much a festival crowd and not the all out adulation they experienced at the recent gigs in London.

Not that this is due to any lack of effort on the bands part mind you. Whilst Alex’s new persona might wind some people up, for me its good value – some dodgy dancing aside. Baring in mind that at least some of it is tongue in cheek it certainly makes for a more entertaining spectacle than a mumbled, “Hi, we’re T’Artic monkeys” that passed for crowd interaction in previous years.

The band play a hit filled, if somewhat controversial set before finishing on the now customary ‘R U Mine’. How many other bands do you know that have both their opener and closer plucked from their fifth album? With both songs more than deserving of the honour too, it shows how much they are firing on all cylinders. With the band having such a solid back catalogue to pick a set list from its inevitable that some people will be disappointed however the lack of ‘A Certain Romance’ was frustrating especially given the inclusion of so-so ‘Suck It And See’ album track ‘Liberty Pictures’ coupled with the band playing the outro to ‘R U Mine’ 3 times due to finishing early.

These are minor quibbles and I walk away satisfied if not somewhat disappointed that they hadn’t matched my admittedly lofty expectations. Whilst these expectations levels are out of the hands of the band they are a natural side effect of raising the bar so high within the last 12 months. Such thoughts can be addressed in the future but for now the band should bask in the glory of just what they have managed to achieve with this album and tour.

Enjoy the rest lads, you’ve more than earned it. I can’t wait to see what comes next from one of the most interesting, consistent and outright finest bands for a very long time.

View all posts by Chris Harvey →