Down in a Rabbit Hole, Part II

The foyer at this venue opens up to the public an hour before the auditorium doors officially open, so I need to be there selling and guarding my stock from half-six. I presume the chap who wants his money will catch up with me later, and completely forget all about the French buffoon venue manager who was being awkward before. It happens every time.

So, it’s now about three o’ clock, I’m set up as much as I can in a foyer, and I have three-and-a-half hours until I need to be back. I head off to the bus, grab my shower stuff, and go to freshen up. It also dawns on me that I could probably do with getting the morning after pill, as I stupidly had unprotected sex last night. I Google the Parisian equivalent of a family planning clinic and find that they don’t seem to do them, really, but I can go to a doctor and have it prescribed. I make a note of the nearest one and I get ready to head over.

Before I go, I pop into catering for a coffee and a couple of the band are in there — Tommy and Bryn. I say hi and just go about making my drink, faffing about by the snacks. I overhear them talking in kind of hushed tones about whether Robin has got his results back yet? I’m thinking to myself, I don’t remember him going on a course, but I just carry on and then I hear Tommy saying a little louder that “she hasn’t texted him back yet.” 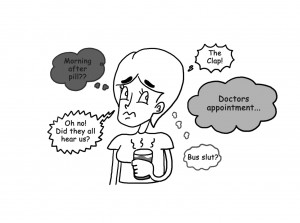 Oh, my word! What? I don’t believe it – so, I’ve just had bareback sodding sex with a slut. Brilliant. Now I’m wondering if I should get checked out for the clap or something whilst I’m getting the pill. This is horrendous. I feel sick. I immediately leg it out of catering and head for the nearest toilet. I look at myself in the mirror. I’m a wreck. I look hideous, I feel hideous, I might have the clap or worse. What on earth have I done? I have to stop drinking. I never do this kind of stuff when I’m sober. You have to be drunk to just go with the flow to that extent whether you want to or not. The point of no return melts away with the salt in the tequila. Bums! This is not good.

I resolve that Vic is definitely not the person to confide in, so I phone another touring mate of mine and she tells me to go to the doc’s tout de suite. I’m not quite sure what my E111 covers me for but I head there anyway. I have a headache. Zut alors!

I hail a cab outside the venue and thrust the address into the driver’s hand. He seems to take me the scenic route, as I’m fairly sure we do a lot of gauche, tout droit, droit, then gauche, gauche again and again. Come on, monsieur, what are you playing at? I’m stressed to the nines as it is! Sixteen euros later we’re there.

It’s closed. Thankfully, it’s open again in half an hour. Seriously, you can always bet on the French to take their breaks. I find myself asking for a receipt. Not sure how I’m going to wangle this one into my expenses but it’s going in at that price. 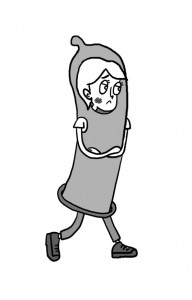 Anyway, I go in and thankfully, my young and female doctor is fluent in both my language and my predicament. Merci beaucoup, mademoiselle. She gives me the morning after pill and a stern glance. She also gives me a paper bag full of condoms. Er, okay, I deserve that! Then, she says she will give me a urine test but not a blood test, and I can phone them in a week for the results — but the minute I get home I should go to my GP and be tested properly. She tells me that if anything were to show in the meantime, at least I will be aware of any urgency.

So, tail between my legs and a pocket full of jonnies, I hotfoot it back to the venue. I’m fairly certain that she shouldn’t have done all that for me, but she smiles at me as I offer her a few guesties in thanks. She says that her husband is working that night, otherwise she should have come. I get the impression she knew how to enjoy herself before she settled down, and we leave it at that. Thanks the lord for students, eh?

When, I get back to the venue, I go and put my bounty in my bunk on the bus, only to find Robin wandering about. I’m tempted to bollock him, but realise that if a guy is up for having unprotected sex once, I should assume the role of responsibility as he probably does it a lot. This is not the time or the place; we have a gig to do. 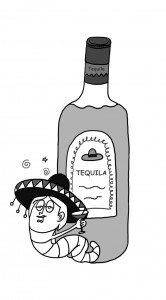 I head back to catering with my laptop and go and get some dinner before doors. Bryn, Tommy, and Leo are in there from the band. I go and sit with them, doing my best to embrace the situation.

We make small talk, and at one point Bryn asks me how my day has been. I tell him it’s been okay, and he says, “Oh?” in a really odd way.

“No reason, you just look a little tired, that’s all. Did you get much sleep?”

The other boys start sniggering and I’m back where I just want the ground to swallow me up. Then, just at that second, Robin walks in. He knew I was going to catering so he grabs a coffee and comes to sit with me, opposite the boys. I start to feel a little better, hoping this might shut them up.

“Ooh, Robin, more coffee, anyone would think you’ve been up all night. You struggling a little today — need a little caffeine, do we?”

Oh, this is ridiculous. Right, so they heard us. Okay. But really, do we need to do this? Robin gives my knee a little squeeze under the table. I look at him and he gives me a look that says, just ignore them, baby. I’m right back in the moment of the night before and realise that what we didn’t wasn’t that bad, so what of it? But then I‘m thinking, hang on; you’re actually a bit of a slut. So I push his hand away and flounce out of the catering room to get to work.

The gig goes well, and I make a few new friends who hang out at the stall. There’s a guy handing out flyers so we chat for most of the night. He practices his English more than I practice my French, it has to be said. It is always good to try it in Paris because they do appreciate it and it helps to pass the time.

Later that evening, after load out and back on the bus, the boys are laying it on thick about Robin and me full on in front of everyone. I’m really embarrassed and start getting the arse, and then Tommy just comes out with it that he was just trying to be stupid and that most of the conversations we overheard all day were just fabrications to wind us up.

I don’t know whether to laugh or cry, but I just look at Robin and he pulls me to one side and says, “I don’t know what they were saying to you but they were giving me hell. I haven’t slept with anyone other than my ex for a while, and then I do it on the bus with the merch girl and just went for it.”

Tommy was the only one who, at least the only one admitting to, hearing us — but he did tell some of the others. Well, I can deal with that. Hearing it first-hand is what I was most worried about, and Tommy I can handle.

I am so relieved that (a) no one is actually bothered, and (b) I probably don’t have the clap as he just split up with his long-term missus recently and hasn’t slept with anyone since. Hallelujah! All is well with the world. I hope.

I go upstairs and chill out with Vic for a bit. We get to chatting about the tour, and she says that I’m doing a great job and is really happy that I am getting on with the crew so well. I’m still not sure if she knows to what extent I’m getting on with some of the backline, but anyway, that’s not the issue. She is happy, so I am happy. A bottle of wine and some slurred conversation later, I go to bed pleased — but this time alone. Quite frankly, that’s just fine with me, and as we head to Holland tonight, I fall asleep with a smile on my face. 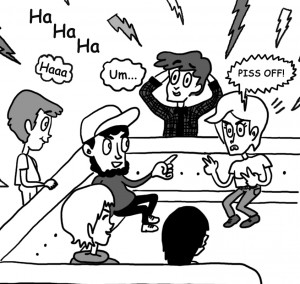