We decide to carry on walking towards the salacious red light district — naturally. I like walking around and looking curiously at the girls in the windows. I think it must be much better for them to be working inside, rather than on the streets; it’s better for their health and safety, especially with it being legal over here — and therefore regulated, to some extent at least.

Still, there is no escaping the fact that prostitution of any kind is a grim business. I see a hideous obese man stumble out of one of the doorways, and two minutes later a fairly slim and attractive prostitute is back in the window looking for another punter. You can romanticise about the oldest business in the world as much as you want, but I don’t believe anyone is a part of it purely out of choice. That man is foul, and I feel really sorry for the girl. I catch her eye; she looks straight through me and looks away, scouring the night for her next job.

All of a sudden, it doesn’t seem so cool to be walking around like a tourist. Staring at the girls, like they’re human zoo exhibits, suddenly seems crass and rude.

“What’s wrong?” Robin asks me. I tell him that the bright pink lights in the windows, and the girls who I can’t help remember are people, is all getting to be a bit much for me, and I want to go somewhere quieter and less manic. On every corner, some dodgy bloke brushes up against one of us, whispering “Coke, coke,” or “Pills, pills.” The menace of the place is much more apparent to me now as I come out of the mushroom haze and temporarily sober up. 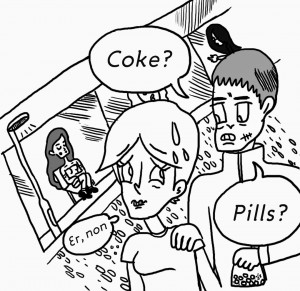 We start to head out of the red light district when suddenly, we bump into Tommy and Bryn.

“Oh aye, where have you two been then?” Toby jokes.

“Just walking around, how about you?”

“Oh much the same,” he replies. “We’re just about leave, it’s getting a bit much for Bee. You want to come?”

We all turn to head back towards our hotel near the Leidseplein. On the way, the mushrooms kick in again and everything seems fun and colourful once more. I think leaving the depressing, grungy area that is the red light district is a big part of it. Tommy and Bryn have only been drinking, so Nick offers them some mushrooms, which they gladly take. We keep walking around, just soaking up the sights. The streets are still really busy with tourists, locals, and plenty of couples. It never fails to amaze me the variety of people still cruising the streets into the early hours. Along with the expected gangs of stoners and stag parties, you can also find older couples walking about – which, personally, I would expect to find in the Van Gogh Museum or something, not sauntering by all the strip bars and smoky coffee shops. Maybe it’s a post-museum tradition, who knows!

We stop at one of the little café bars and sit outside. Tommy and Bryn are a little quiet — I think they’re coming up. Toby and Nick are talking animatedly, but I can’t seem to focus on their conversation. Robin comes to sit next to me, putting his arm around my shoulders. 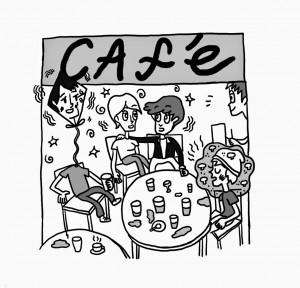 “Are you alright, little one? You’ve gone quiet.”

“As long as you are all right.” He turns to talk to Dave. My mind is swimming. I can’t tell what people are talking about. I hear snippets but just as I’m able to focus, my grip on things disappears almost immediately. I turn to Tommy and Bryn. From what I can fathom, they’re talking about tattoos. Ah, perfect! I always have something to say on that topic. I remember how I saw a really nice tattoo on a girl’s arm in Copenhagen last time I was there. I start trying to explain it to them but I’m not making any sense. I keep attempting to speak and just keep going around in circles. I can’t seem to finish a sentence or speak coherently.

After about two or three minutes of attempting to speak, I just murmur something along the lines of, “I’m not making much sense am I?” to which they nod. Oh dear. I just sit there quietly, trying to organise my thoughts. I know what I mean to say and what I’m trying to convey, but I’ve lost the ability to communicate those thoughts to anyone else. I think sitting here quietly watching the passers-by, and just taking in my immediate surroundings, is probably quite enough for me to cope with at the moment. So I decide to leave it at that.

The funny thing about mushrooms is how they intensify certain things – like your experience of colours — but they dampen others, like the ability to communicate. To some extent, they even staunch the will to communicate, particularly when you are in the thick of the trip. It ebbs and flows; one minute, you’re completely immersed in sensory overload, and the next you’re sober as a teetotaller, sheepishly wondering how it all got so crazy.

We order another round of drinks and stay put for well over an hour — maybe two, it’s difficult to tell. At this point, Tommy and Bryn are high as kites as well, and we are all having a good giggle and talking utter nonsense, much to our great amusement. The waiter gives us a knowing look and is very patient with us as we order. He must see this a lot, no doubt. I hope we remember to be good tippers.

When we finally get ourselves together enough to ask for the bill, we pay it and start heading back towards the hotel. On the way, as we are bit giddy still, we decide to have a piggyback race. I get on top of Robin; Toby jumps on Nick’s back, and Tommy carries Bryn. Dave follows, jogging lightly to keep up. We race, narrowly missing several trams. They’re so quiet! You really have to have your wits about you in Amsterdam even at the safest of times, never mind wasted out of your mind in the middle of a nighttime piggyback race. 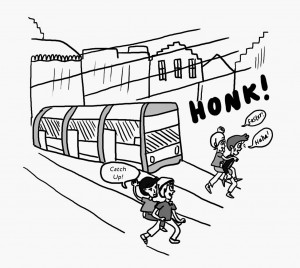 Right near the hotel, Robin and I are in the lead. He spins me around and I throw my hands in the air, already starting to celebrate our impending win. Nick is not one to be beaten easily though, so he speeds up and lunges forward, still with Tommy on his back. He trips over the shallow pavement and they both go hurtling through the air. It all happens a little too fast for me to take in, as I am still busy cheering and throwing my arms around in the air. The next thing I know, they are both crumpled in a heap on the floor. Tommy is howling. At first, I think it’s in laughter, but it would seem he is actually in quite a bit of pain.

Toby and Nick pull them both up and try to find out what the matter is. Bryn’s all right, he’s scraped himself a little but nothing more than boozy bruises. Tommy, on the other hand, looks like he’s seriously hurt his wrist. His arm is badly grazed and bleeding, but his wrist looks even worse. We head straight to the hotel lobby. Bryn is trying to convince Tommy to call an ambulance or go to the hospital, but we all decide that — seeing as we’ve all had mushrooms — it might be a better idea to wait until they’ve worn off. Plus, bad as it looks, he doesn’t seem to be in that much pain at the moment. Still, his wrist is getting more swollen by the minute, and is starting to gain colour already. That’s never a good sign. 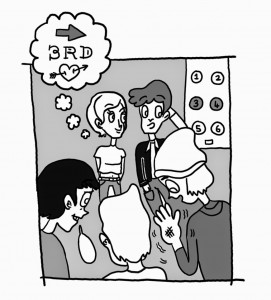 After hanging around in the lobby, looking fairly shifty as we try to decide what the best course of action is, Tommy goes up to his room, resolving to call Vic first thing and see how his injury looks in the morning. The rest of us head up to our rooms in the lift. The party atmosphere has somewhat dulled now, and I feel like I’m coming down. Tommy and Bryn walk across the lobby and go up in a different lift over there, which takes them closest to their rooms. The rest of us head to the main elevator in front of us. Toby gets out first on the third floor. I am also on the third floor, but want Robin to come with me. Unfortunately, he, Nick, and Dave are on the fourth floor so there’s no way to discreetly have the quick conversation I need with Robin, so I just get out and head straight to my room, feeling a little dejected and deflated. I was hoping to have some fun with Robin again tonight.

A few minutes later, my phone rings. When I answer it, it’s Robin.

“Hey, you. Got your number from the rooming list. You want to come over to mine for a cuddle?”

“Well, can you head down to mine? I’m already kinda undressed,” I reply.

“Say no more, that’s all the invite I need. See you in three.”

Hurrah! Result! In less than five minutes, Robin and I are in bed having a rather vigorous cuddle. Good night!