Justice and Dizzee Rascal have also been announced.

With a new home at the Lulworth Estate, Dorset, it’s a brand-new era for Bestival, with 2017’s event set to explore the wonders of Colour on a mission to ‘increase the peace’.

Marking the new era, The XX will christen the new Castle Stage with their headline set, while A Tribe Called Quest will play Bestival as their last UK show. Closing the show are synth-pop legends Pet Shop Boys are going to bring some colour to Sunday night, a decade since they last graced the festival. Thursday will see Jamie T kick off the show with an exclusive performance on The Box stage.

Elsewhere, Justice, Dizzee Rascal, DJ Shadow, Little Dragon, Rag ‘n’ Bone Man, Circa Waves and many more complete a stellar live lineup, while DJ sets from the likes of Annie Mac, Toddla T and David Rodigan see Bestival 2017 shaping up to be a good start to a new era. 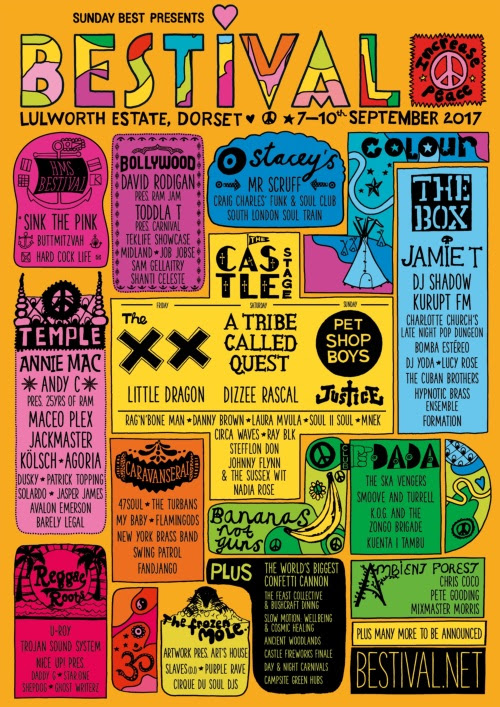 As well as the return of HMS Bestival, 2017 is introducing a whole new world to explore; from The World’s Biggest Confetti Cannon to The Sugar Skulls Cocktail Bus there’s endless things to do.

To celebrate the new home, Bestival are offering special ticket deals, including coach packages. Head to www.Bestival.net for info.

The Line-Up So Far

This Feeling Track of the Day : SONS ‘Reptiles’