As BIG DADDY KANE’S DJ warms the crowd with shout outs of “let me hear you” and “Liverpool, are you in the house” some pre gig enthusiasm starts to slip away. This pre planned nonsense which will happen regardless of city and regardless of venue or crowd noise in front of them seems to be pointless in this day in age. After all we aren’t in an underground club in Queens in 1978 awaiting the arrival of The Furious Five, we are in fact in the shiny new East Village Art Centre in Liverpool in 2013. The one thing that is constant from my previous remark however is that we are awaiting of a rap and hip hop legend.

Having started off in the Juice Crew in 1986 alongside the equally legendary Biz Markie and Marly Marl, Antonio Hardy, AKA Big Daddy Kane, became a main player of rap’s fabled ’86-’89 “golden age” and a Grammy winner in the process. Legend has it that the greatest rapper from back in the day, Rakim, even turned down a mic to mic challenge with him. He has kept a low profile in recent years with no album since 1998 and only the odd guest appearance so the opportunity to see him in such intimate surroundings is a great pleasure.

With such a legendary performer in town it is no surprise that The East Village Arts Centre is packed to the rafters and by the time DJ finally introduces Kane to the stage the enthusiasm is regained and every beat is nodded along to every break results in body movement although it has to be noted that Kane is dressed in the most ‘un hip hop’ attire you could imagine (it looked like he had just stepped out of the changing rooms in Marks n Sparks). No bling on show here tonight folks! 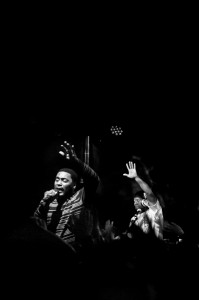 He opens up with the furiously up-tempo, ‘Nuff’ Respect’ and on the second verse he rhymes over the Sugarhill Gang’s ‘Rappers Delight’ beats, then straight into 1987 single ‘Raw‘. He follows this up with the stand out ‘The Wrath Of Kane’ during which the rapper drops into his verse from the 1986 Juice Crew classic ‘The Symphony’.

What a start. He has been on stage for all of five minutes and already managed to fit in 4 of the greatest hip hop numbers of all time. It’s hard to conceive that this man is actually an asthma sufferer and the speed he is spitting out his rhymes with such clarity and precision is real.

He goes on to play ‘I get the Job Done’ and ‘Smooth Operator’ from second album ‘It’s a Big Daddy Thing’ before taking time out to pay homage to his peers such as Biggie and MCA in a specially dedicated track ‘Reminisce’. As he does and lets his masterful rhymes do the talking it’s obvious that this is proper hip hop. No need for fake ganster poses, back up ‘crews’ or pimp jackets. And he finishes with ‘Aint No Half Steppin’, ‘Lean on me’ a monumental ‘Young Gifted And Black’, you’re reminded of just how many hits this originator had