Boy did we have trouble getting in. As I strolled down Oxford street aware that we may have to get in early to get stamped then leave for a pint, I saw a queue that must have been at least 50 yards long and then snaked round the corner up Berners Street another 50 or 60 yards! By the entrance to the 100 Club I saw Matt from Clash Magazine outside looking disgruntled. Matt could get himself into Kate Middleton’s baby shower if he wanted so this, was not a good omen. Compounded by a middle aged man walking up and down with a big sign ‘ticket wanted’.

I was here for the Converse BRMC gig and having never seen the band live I realised immediately that this was to be something special. The only album I had heard was Howl which was burnt for me years ago during my single days by someone with great boobs. I’ve always known that at some point this band and I would meet somewhere under a road sign with “dirty dirty rock n roll” and an arrow painted in blood.

After much tribulation and stalking of the door girl in Boots, I got in. DJ spinning some old funk n soul tunes, he knew his onions.

My wingman was Craig, or crabcraig  to you in twitter speak, and we proceeded to watch the place pack out from the sanctity of the bar. It was full by half 8 when EIPI! took the stage. A thundering instrumental
band who engaged the audience and were pretty special. No singer, just heavy and clever riffs and an awesome drummer (who looked uncannily like my mate Glen, although I did chuckle when Craig leant over and said “drummer looks like Peter Seller” as I tried to ponder why he hadn’t said ‘Sellers’, surely he knew right? No. “I SAID THE DRUMMER LOOKS LIKE PETER SELLER”. To which I started to chuckle away and he leant back in and said “can’t believe you don’t know who Peter Seller is”). Classic.

The 4th track started to dry up a bit although there were some nice phat weird industrial techno effects. They were appreciated by the crowd in a very London way, which is to say no one clapped but you knew people were digging them.

To describe them further; each song could have been the last hurrah of a Black Sabbath banger. Nowt wrong there.

I popped outside to see where Craig and Wellard were and met a young lad called Cobus. I’d overheard him chatting and thought he had might just have the makings of a Gigslutz foot soldier. We had a good chat, he knew his stuff, so you may be hearing more about him.

I dropped downstairs back into the fray which was increasing in heat and anticipation. I caught Tubes from Soccer AM snaking his way to the loo as the final support ‘Dexters’ came on stage. Although a little Twang like for me, much down to the frontman’s geezer persona, (think a young Shaun Ryder / Liam test tube experiment) they’ve definitely got it. They’ve got character. Chemistry. I’d prefer that any day to some foppish twat in a hoodie looking sombre and standing by a laptop. A lad outside later remarked “is that still relevant, that geezerish post-libertines thing?” and my reply was “as long as there are geezers into rock n roll yeah”. These aren’t negative observations by the way. They were tight as you can ask for and a real band, a band of brothers, not overly thinking about it, just having it, doing it, energy and a lust for the stage. Good tunes.

I noted a couple of stand out tracks ‘I’ll Make it Worth Your While’ and ‘Let Me Recover’, (allow for error in those titles, educated guesses). The singer shouted “are you with us?!”  and received one response. Londoners certainly are a tough nut to crack and take a while to warm up.   No love for the sake of it daan ere. The crowd finally tickled into some 2 way affection via a long and aggressive acoustic intro to a track that reminded me of the Buzzcocks’ ‘Ever Fallen in Love With Someone”. Great tune Dexters. Fair play.

A toilet trip is now nigh impossible. So I nipped out to the Ship in Wardour Street and jogged back. This was gonna be a good night. I was informed by Wellard when I got back downstairs that the DJ had played Forever by The Charlatans which I’d missed unfortunately. Bugger.

The atmosphere and lighting had now changed and the scene was now set. Dry ice and an incredible dusty orange hue had created what I can only describe as THE perfect rock n roll gig setting in what must be the most legendary and historical rock n roll venue in London. What a place. Respect to Converse for rescuing it and not over branding it. I stood and imagined Weller in there as a wirey teenager, anticipating the Pistols taking the stage just as I was now anticipating the boys from San Fran. 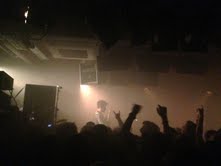 They took to the stage to rousing applause but there was so much smoke that you could hardly make them out in the tepid and eerily dull orange lighting. ‘Hate The Taste’ kicked things off and it was clear they meant business. The guitar and bass sound they have is completely reflective of that unique filthy feel they achieve on record. I don’t know any of these tracks but I’m lost in it. Finding myself shaking my head in awe. They don’t make em like this any more. The place was shaking, not one person was looking anywhere other than directly at them. Rob Been and Peter Hayes, mates since school, together a powerful force up there, yards apart on the wide stage but completely owning it. Levon every now and again right up against the crowd, guitar upright as if injecting some of it’s sex into those adoring him.

Track 2 feels religious, but a dark religion. Riff sending me a bit into space, this is magical stuff.

The fact you can’t quite make them out, just pure silhouettes emanating lightning, murmuring “I bled the needle through, you beat the devil’s tattoo” over and over and over.

“I need a rival” he sings, but I’m struggling to think of one. This is up there with Kings of Leon live. The stuff that makes you look on adoringly as you did as a teenage boy, longing to be in a rock n roll band, why the hell am I not in a band? Their roots coming through thick and fast.

Harmonica out. 1st track off Howl ‘Shuffle Your Feet’. Peerless. Then at last they slow it down but the kick drum reminded you who’s party it is. I
haven’t seen the drummer yet. The band pound on, steaming ahead, unstoppable, like a mustang with a twisted grill persevering through the desert. The crowd are sold, done, on shoulders, bouncing, moshing, Been announcing that all they’ve done are festivals this year and this venue and crowd are what it’s all about. They’ve well and truly earned the respect of a tough crowd. ‘There Ain’t No Easy Way Out’ sent the place ballistic.

They finish with ‘Spread Your Love’ and what was basically a faultless gig by a true true legendary rock n roll band.

A band to see before you die.

I make my train and order 3 BRMC albums from amazon. My weekend is sorted.

Respect to BRMC, Converse and the 100 Club.