This is the question the English press would repeatedly ask Kim Gordon (and one quoted in 2009’s ‘Sacred Trickster’) when Sonic Youth were starting out, and one which she seeks to answer in her new book, Girl In A Band. Discussing femininity and being a woman in a male-dominated industry, these insightful and sociological themes are set alongside the backdrop of Gordon’s personal experiences as a daughter, sister, wife, divorcee and, of course, a ‘girl in a band’

Beginning at ‘the end’, at Sonic Youth’s final concert in Brazil 2011, we are immediately introduced to Gordon’s sadness and resentment towards ex-husband and band mate, Thurston Moore: “the couple everyone believed was golden and normal and eternally intact… was now just another cliché of middle-aged relationship failure – a male midlife crisis, another woman, a double life.” A band as determinedly unconventional and impassioned as Sonic Youth had ended in the most conventionally ugly of ways.

We are then taken back to the beginning with an introduction to Gordon’s album-by-album account of Sonic Youth’s career. From her childhood in California, to studying art and meeting Thurston in New York, we are given a rather blunt, yet visually detailed, insight into Gordon’s journey to Sonic Youth. Her hypersensitivity and extreme shyness are referred to on almost every page, and accredited to her paranoid schizophrenic brother, Keller, and her rather detached mother. Gordon fondly describes how much she admires Keller and how he played a massive part in shaping who she is, despite the constant way in which he traumatised her growing up: “His ridiculing and button pushing went beyond the usual sibling rivalry… he’d make fun of me for laughing, make fun of me for crying, make fun of me when I didn’t say anything at all.”  Knowing she’d get mocked, or even beaten up, for showing any sort of emotion, Gordon learnt from a young age to hide how she was feeling and harden herself to the outside world.

This self-taught appearance of aloofness is reflected in Gordon’s style of writing; with little sign of humour or sarcasm, I initially found it difficult to warm to the woman I had looked up to for so long. However, upon further reflection, I realised that perhaps this left more space for the inspired visual imagery and social discussion that appears throughout. And, in a moment of emotional openness, Gordon appears to explain herself: “it’s hard to tell a love story with a broken heart”. 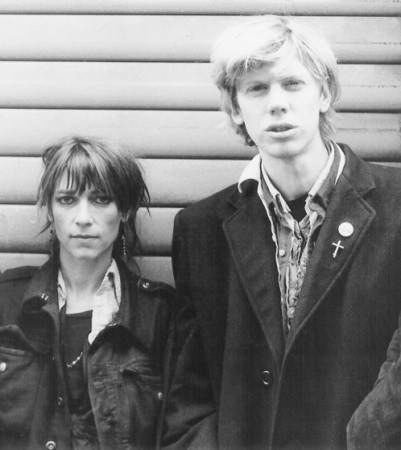 From Gordon’s first meeting with that “like-minded, gangly, 6 foot 6 guitarist” in 1980, past some special moments of togetherness during Sonic Youth’s life, through to the joys of parenthood and, finally, the nightmare of their break up, these memoirs chart the tumultuous journey of this ‘Golden Couple’ of rock. Alongside Moore and Gordon’s relationship, we are offered discerning observations of some of the pivotal moments of the punk-rock scene of the eighties and nineties, detailed analysis of Sonic Youth’s song meanings and intuitive and impassioned discussions of feminism and the sexism surrounding the music industry.

Kim Gordon has offered a unique perspective of how a dedicated outcast became one of the most influential musical figures of the last three decades, and how she survived being a Girl In A Band.

Girl in a Band is published by Faber & Faber, and available to buy on Amazon and in bookshops nationwide.