The Beatles Get Back period is full of interest. The band had long since ditched their matching suits and the screaming crowds at their concerts instead the band turned into a masterfully sharp studio band, the likes of Brian Wilson and Jagger/Richards were trying to play catch up, producing predeceasing classic albums Sargent Pepper, Magical Mystery Tour, The White Album, this latter period in the bands history was supposedly the bands bitter ending, yet a new book along with a new 3 part film, coming in November 2021 on Disney + is set to shed light on the band like never before.

From new mouth-watering moving picture trailers the band still had their mischievous Goons humour whilst they created music that will forever more be cherished and treasured by all who fall under its spell. It is this very facet that film maker Peter Jackson testifies to in his foreword in that the book, that the film has a lot of laughter in it, a misconception that has often surrounded this period. Whilst this book is not a substitute for the 3 part film which uses stunning footage originally shot by Michael Lindsay Hogg, the book firmly focuses on the sublime work of Ethan Russell and Linda McCartney still imagery plus written word by many who have become involved in this period of the band. 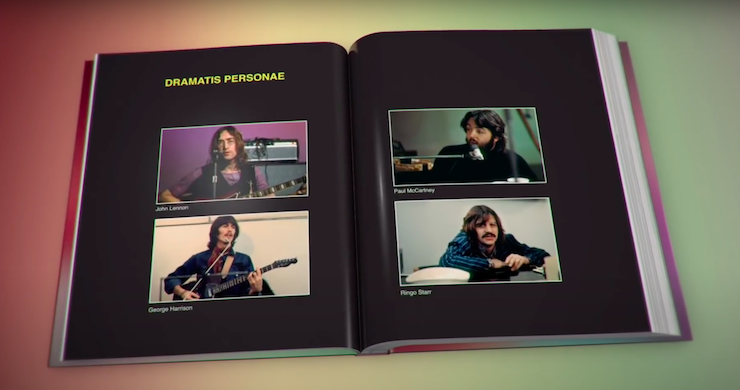 There are words by the playwright Hanif Kureishi give his own wit and oversights of the the period plus the acclaimed author John Harris gives further exciting and detailed commentary detailing some of the the reasons for the footage taking place, the relationships between band members that surfaced from the filimg/recording plus the goings on in and around the band at the time. There’s some tantalising transcripts taken directly from the studio sessions that were recorded. General chit chat around the recording studio; being too cold and the premises not good for recording purposes, the band might have played the Royal Albert Hall, Eric Brudon gets some aplomb for this version of Ring Of Fire and plenty of tasters to what maybe we’ll see the band run through in the film including Dig a Pony, I’ve Got a Feeling and Let It Be.

Whilst the dialogue opens up avenues of new information the pictures on show equally help to dramatize these events. Both photographers colourfully rich and visually heroic pictures of the fab four decked out in fab (no pun) clothes, no colour grandad shirts, thick multi coloured shirts, colourful woollen jumpers then there’s the fabulous rainbow like effect that colours the background of Twickenham Studios as the band look eager to play their instruments, the on the roof gig is yet again full of smiling faces as is shots taken from when the band ran through Let It Be and Two Of Us, Paul in a white short buttoned all the way up, John all in denim, George in a red shirt with black waistcoat whilst Ringo is suitably suited and booted to the hilt.

The book, with its accompanying script and visuals is a an categoric triumph, full of little twists and turns, delights and scintillating packaging over its 240 pages. There is a seemingly never ending appeal of everything that The Beatles have ever recorded and released that makes this yet again a showing stopping centrepiece. Oh and for the record of this review ‘I hope I passed the audition’.