Arriving on Clapham Common from it’s usual Hyde Park setting, Calling Festival attempted to ease the pain for everyone who didn’t get a Glastonbury ticket and with Aerosmith and Stevie Wonder headlining, the certainly made people forget about Worthy Farm for a while at least, even if it did rain half the time in true Glastonbury style! 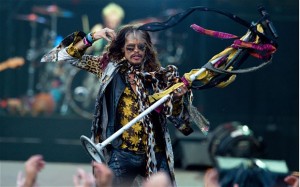 The honour of opening for Aerosmith on Day 1 was handed to little known US teenage three piece 3 Dudes. Having supported McBusted on their recent UK tour, the brothers should be used to playing to large crowds across Britain and they handled the pressure well, throwing in some covers including The Sweet’s ‘Ballroom Blitz’ and Jimi Hendrix’s ‘Purple Haze’ along with their own songs. As the day was still early, the crowd were yet to fully wake up and so were a little subdued but the following act on the Main Stage, Heaven’s Basement did their best to ensure that everyone was wide awake for their set. With a very energetic live performance which featured several songs from their debut album Filthy Empire, lead singer Aaron Buchanan successfully attempted to perform a crowd surfing handstand, much to the delight of the crowd who had begun to gather at the stage during the band’s set.

It was the following act, however, who were the biggest surprise of the day. Hailing from St Joseph, Missouri, the three brothers (there must have been a theme going on) who make up Radkey blew the audience away with a show stealing performance of true punk spirit that saw bass player Isaiah slipping all over the rain soaked stage as he bounced around during the majority of their set which featured tracks such as ‘Cat & Mouse’ and N.I.G.G.A (Not Okay). The Nirvana and Ramones influenced outfit gained the biggest crowd of the earlier sessions and it was rightfully deserved as their brutal, punk riffs and deep vocals differentiated the sound of the day nicely.

Whilst Bon Jovi’s Richie Sambora and 90s hard rockers Thunder continued to impress on the Main Stage, over in the much smaller and more intimate Pepsi Max Stage it was left to former World Superbike Champion James Toseland and his conveniently named band Toseland to show what they were made of. With a sound that wasn’t to far from what you might expect from a Bon Jovi show, Toseland pleasantly surprised many people who were unsure how well a former racing driver would handle such a huge crowd; the answer was ‘superbly’ with the highlight of their set being James Toseland’s impressively powerful vocals. Also on the Pepsi Max stage, Australian indie four piece The Jezabels, who have described their sound as “intenseindie” played a charismatic and dramatic set with plenty of moody lighting, which showed exactly why they have been hotly tipped for great things this year.

But after an electric set from American blues-rock musician Joe Bonamassa (who it must be said is easily one of the most skilful and technically gifted guitar players in the world), it was left to the ever consistent Aerosmith to close the first day and they made sure they left their mark with a set full of their greatest hits from across the last four decades including ‘Love In An Elevator’, ‘Walk This Way’ and ‘I Don’t Wanna Miss A Thing’. After finding time to pay tribute to their British hero by dedicating a cover of The Beatles ‘Come Together’ to the late John Lennon, the enigmatic Steven Tyler and co powered through a set that had the band playing out in the middle of a central walkway and saw their frontman climbing down to sing with fans, who clearly loved every second. Ending with an encore of ‘Dream On’ and ‘Smooth Emotion’, the ticker tape filled finale was the perfect end to a great day of live music and set up Day 2 nicely.

Day 2 saw early performances from fresh faced Liverpudlian Jetta and talented acoustic guitarist Will Heard, whose performance of Drake’s ‘Girls Love Beyonce’ went down really well with the sing along crowd. BBC Sound of 2012 poll winner Michael Kiwanuka treat the crowd to a chilled set on the main stage wearing his muddy jeans from the previous day, having arrived back from Glastonbury the same morning, but the Sunday crowd really woke up with the arrival of Paloma Faith, dressed in a huge white hat with feathers galore. The London-born singer-songwriter played through several songs from her 2014 album A Perfect Contradiction including the Pharrell Williams produced single ‘Can’t Rely On You’. 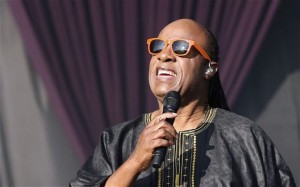 Acoustic supremo Jack Johnson was to follow and his set, accompanied by his Jack Johnson band, combined newer material with tracks from his hugely successful 2005 album In Between Dreams. Johnson and his band were clearly humbled to be opening for a certain Mr Wonder with the band’s guitarist commenting that “this was an absolute dream” and they, like the thousands of other people who had turned up to see him were not to be let down. With a set around the two hour mark, Stevie Wonder, like Aerosmith the night before him, played a career spanning set featuring songs like ‘Superstition’, ‘Sir Duke’ and crowd favourite ‘Signed, Sealed, Delivered’. Wonder regularly sank into some slightly self indulgent jam-session style instrumentals; the longest lasting just short of 10 minutes, but this didn’t detract from the overall quality of the performance. At one point, Wonder, putting on a London accent, claimed that he was a Stevie Wonder tribute act and that he “could do Stevie Wonder songs, but better!” much to the hilarity of everyone on attendance. With hit after hit coming thick and fast and having called up Richie Sambora to the stage for the final track, the crowd soon forgot about the torrential downpours that had plagued them earlier in the day and revelled in the glorious sun that had soaked the stage upon Wonder’s arrival.

When some musicians reach a certain age and start to lose the vocal quality that they had once been blessed with, it can often be highlighted at an even such as this. Thankfully the two Stevie’s (Wonder and Tyler) are still capable of hitting every note and have the passion to put on a spectacular show for their audience, certainly showing a lot of newer/younger bands/musicians how it should be done. With surely only a handful of huge shows left for both headline acts, it was a privilege to see them grace the same stage and something that Clapham will be hoping they can have all over again next year!

LISTEN: Nile Rodgers shares new song ‘Do What I Wanna Do’