Having landed a few press passes courtesy of friends / top girls at LD Communications, 4 of us met at Waterloo at midday. Jordan, Wellard and Andy. All very metrosexual; sun cream and wet wipes purchased along with bottles of water to stave off the heat as best as possible.

Few beers on the train (sat by the loo) with the target being to make Soul II Soul’s 2pm slot. Having bought some mojitos from the M&S at Guildford station, whilst pointing out to Andy that he had his flip flops on the wrong feet (how do you do that?!), we just about made it for the start of their set and it endorsed our feeling that the day was to be a summery cotton wool vibe of a festival. How can it be anything other than that when you stroll in to Caron Wheeler grooving out Keep On Movin’. They casually and easily sailed throw their impressive back catalogue of hits as everyone around us danced away, smiles adorning faces.

An addition to the original line up being MC Chickaboo who drove the whole thing forwards and she gave it consistency. I was much amused when Jordan said “he’s good him”, completely unaware.

We retreated to the guest area for some shade and Jordan had trouble with acid, of the internal kind not the LSD variety. I went to find a medic and before we knew it they’d called a whole team of medics and an ambulance was on its way. For some reason Jordan handled the whole situation laying down and with a Bolton accent (he’s from Sydenham sarf London). Thanks to Kelly the medic though. Top lass. As well as some other strangers who took it upon themselves to come and help. It was through this fellow festival goer love in that a chap with a Stone Roses t shirt strolled over and we all broke out into an impromptu chorus of Made of Stone with some onlookers joining in. It was quiet in the guest area until we arrived but hey ho, no one seemed to mind. 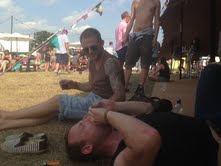 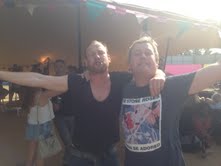 Following a little post-traumatic snooze, we went to check Chic out who were incredible, the four of us more than happy to have seen the legend and friend of Gigslutz that is Nile Rodgers, but alas it was too hot mid-afternoon so we had to cut it short before one of us truly freaked out. I didn’t realise until this weekend that ‘Freak Out’ was originally entitled ‘F*** Off!’, after they had been turned away from Studio 54 and told to do exactly that, went home instead and wrote the tune. Pop quiz top pocket!

The next act we were excited about seeing was Loose Ends, mainly for their 1990 classic view on heroine addiction ‘Don’t Be A Fool’, as well as the Frankie Knuckles inspired ‘Hangin’ On A String’. However they were in all honestly a little disappointing. Not for any lack of talent or stage presence it was just more on the soft soul side than the hip hop tinged sound I was expecting. 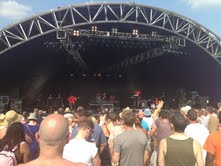 I’m not sure how or why but we missed Aswad, I think it was the heat again, but it’s a compliment to the feel of the festival that it was conducive to lounging and laying around.

We did however get to our feet for Ocean Colour Scene. They make it look so easy and the crowd fed off anthem after anthem. It never fails to amaze me how many true singalong bangers they have, I think my beer was in the air more than by my side. There was no sign of Dan Sealey though, their bassist, his absence more than made up for by Andy Bennett’s top barnet! They threw in a couple of new ones which sounded well into the 7 out of 10 range. The latest album ‘Painting’ has been getting some fairly generous reviews from what I’ve seen. I shall be immersing myself in it asap. The set was sealed with a steaming version of 100 Mile High City and Day We Caught The Train, during which I lost the plot a bit and threw the frisby I’d taken at Simon Fowler from afar, and his eyes met it, heading towards his bonce, you could feel the gasps and just knew everyone was thinking “that’s gonna hit him in the face”. It was one of those slow motion car crash moments but luckily it just dipped just as it approached him. Thank mod for that. Could have been disastrous. Especially in the twilight of my OCS gigging career.

That was our lot. We decided to head back to Sydenham and the comfort of the Alfred’s jukebox, and gave Joss Stone a miss, Jamiroquai too. Zonked out.

I’d highly recommend this festival to those who appreciate a pleasant day out rather than a raucous affair.
Cheers Magic. 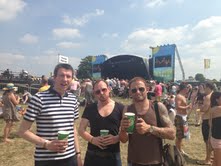 T IN THE PARK – Sunday Review