Over the last few years Barclaycard Presents British Summer Time has become one of the most prominent dates of festival season. Legends – check; exclusives – check; diversity – check. Following history defining performances from The Rolling Stones, The Libertines and Taylor Swift, this year’s headliners do not disappoint.

Both Carole King and Stevie Wonder will be performing seminal albums of theirs in full (King’s Tapestry, exclusively, and Wonder’s Songs In The Key Of Life) while former Glastonbury headliners Florence + The Machine and Mumford & Sons bring their sets from Worthy Farm to London’s Hyde Park, and boyband turned manband/national treasures Take That will perform one of the biggest gigs of their career. 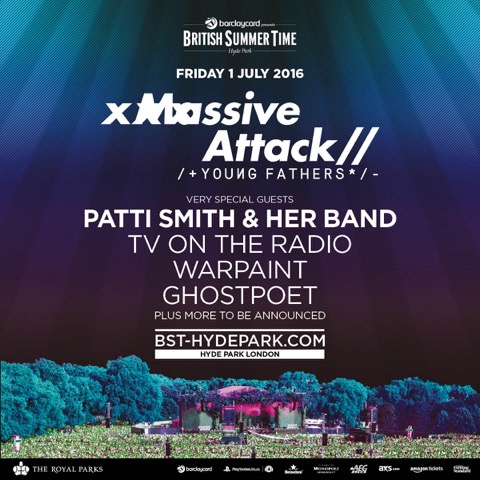 Opening the two-weekend event on Friday 1st July are trip-hop icons Massive Attack, and we’ve got 2 tickets to give away. As with every other date, Massive Attack are joined by acts over a handful of stages as BST becomes the biggest festival of the summer, with Patti Smith, Warpaint, TV On The Radio and Ghostpoet also performing.

Pharrell Williams, Kendrick Lamar, Don Henley, Ella Eyre, Alabama Shakes, Jamie XX, Mystery Jets, Wolf Alice and many, many more will also bring their noise across the weekends. Tickets are available here. For a chance to bag 2 to Massive Attack enter the competition below. (Closes on Friday 6th May.)