ODE TO THE MODE

There’s a full house at the O2 tonight. That’s 20,000 Depeche disciples stood before a nonagan shaped screen and a stage thinly veiled in a purple haze. They’re a testament to how electro ages not and as the band arrive to a standing ovation, it becomes immediately clear that David Gahan doesn’t age either. The Mode’s frontman, a recovering heroin addict, is famed for his dices with death yet at 51 he’s the Basildon Benjamin Button (hats off to you, sir).

Synth sounds slip in and out of range, stirring an already excitable crowd. It’s ‘Welcome To My World’, the opening track of their thirteenth album ‘Delta Machine’ released March this year. They play to their strengths here by kicking off with a track that has an immediately recognisable opening. The beginning of ‘Welcome To My World’ is to ‘Delta Machine’ what ‘Strange Love’ is to ‘Music for the Masses’ – distinguishable and engaging in a heartbeat. Gahan directs his own set like a conductor, arms outstretched and fingers flicking the air delicately. This analogy is only furthered by the silk ivory waistcoat embellished with black music notes that’s revealed after he removes his jacket. 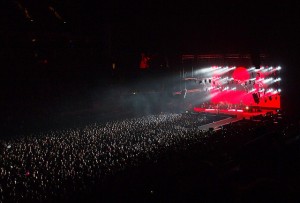 No time to waste, they deliver a second track from ‘Delta Machine’ before indulging us in some more established songs like ‘In Your Room’ and ‘Precious’. There’s something very unique about Gahan as a frontman. He gyrates his hips, grabs his crotch, runs his hands across his chest and delivers an incredibly sexual performance to the suggestive lyrics of ‘Behind The Wheel’ but…it’s not indulgent. Instead, it turns into a celebration of the band as a whole as he marches to drummer Christian Eigner, microphone stand in hand, to enjoy the moment. Seconds later, he’s back-to-back with PVC-clad guitarist Martin Gore whose black nails travel across the neck of his guitar. He even exits the stage, leaving Gore to play protagonist for the slower and more emotionally weighty tracks like ‘Only When I Lose Myself’ and ‘Heaven’. Lighters would be held up high to the words “I feel hypnotised, I feel paralysed/I have found heaven” if the O2 would allow it.

Something big is required to re-energise a now placid crowd – cue a re-entrace from Gahan who picks it up with ‘Soothe My Soul’ and ‘John The Revelator’, songs worthy of a sparkly waistcoat. He spins and twirls into ‘Enjoy The Silence’, their career-defining track from the ’90s. Words clearly ARE very unnecessary as he thrusts his microphone into the crowd and leaves us to sing it. Nevertheless, it’s followed by ‘Personal Jesus’, a song that sees a mass of arms in the air like a gospel choir singing those famous words of divinity; “reach out and touch faith”.

Aptly named, ‘Goodbye’ is the track to see us out but an encore is already inevitable. Returning moments later, they deliver ‘Home’, a Gore speciality, that fades out to thousands of voices reciting the guitar riff in a series of ‘woah-a-woahs’. It’s remarkable how Depeche Mode can follow a slow ballad like ‘Home’ with something as energetic as ‘Just Can’t Get Enough’ but they pull it off to a crowd of jumping jacks. ‘They’re so much better tonight aren’t they?” Gahan says to his band. Oh stop it, I bet you say that to all the audiences.

The Stone Roses: Made of Stone – Film Review