The Lantern is the venue for the Bristol leg of EMA’s (real name Erika M. Anderson) brief UK tour in support of her stunning second album ‘The Future’s Void’, which has drawn critical acclaim from across the board. Yet tonight she has been relegated to the early slot in the smaller room of Colston Hall, with Flying Lotus playing the main show in the same venue later tonight. It’s potentially part of the reason why, as she strides out in front of the dimly-lit room at just past eight o’clock, The Lantern is barely half-full. It’s a shame, and she looks slightly taken aback at the cavernous-looking room, but nonetheless launches straight into ‘Satellites’ – a barnstorming album closer on the aforementioned ‘The Future’s Void’ and an equally impressive opening live track. Confrontational, daring and experimental, it’s enough to get the sparse crowd straight into the swing of things. 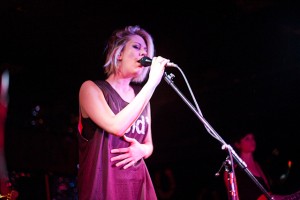 Musically the band are tight, and even though EMA appears to be going through the motions for the first few numbers, she responds to the enthusiastic audience response to each song. By the time the stunning ‘So Blonde’ gets an airing, both artist and audience are feeding off each other to create an absorbing live spectacle. Like her lyrics, EMA’s live show is deeply personal, and the intimate nature of the gig is absolutely suited to the compellingness of the live show.

The anthemic electronics of ‘Cthulu’, another album highlight, is stunning live – as the audience have come to expect by now. After a slow start the band are motoring through the gears and the intensity of EMA is something to behold – symbolised by a moment later in the gig when she greets adoring fans at the barrier who are equally blown away by the personal nature of her performance. She rattles through the woozy ‘When She Comes’ and the raw emotions of ‘3Jane’ with ease, before pointedly sitting down for ‘Marked’ – the vulnerability of the lyrics and honest performance making for a beguiling rendition of the 2011 track. It’s hard to take your eyes off EMA during her recital of lyrics such as “I wish that every time he touched me left a mark” and “My arms they are a see through plastic/My arms are a secret/bloodless, skinless mass”. Being seated to perform this live – with her gaze not leaving the floor the whole time – suddenly seems apt for a song that is unsettling in its honesty and striking in its delivery. 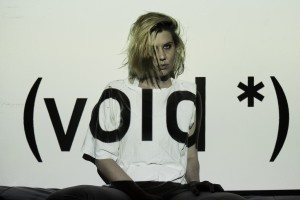 During the heavier penultimate number, an avid teenage fan on the barrier suddenly faints – yet as the opening bars of ‘Dead Celebrity’ begin, the gig is so personal and so intimate that she asks another member of the crowd to get him back in for the set closer, quipping that she feels “like The Beatles” with fainting fans and all. As the set draws to a close to rapturous applause, that’s gratefully received by Anderson and her band, the opening notes of the support act for Flying Lotus’ main room show can be heard from outside. Although tonight may not be the night, it’s hard to think that EMA will be playing second fiddle to anyone else if her live shows continue to be this engrossing.

View all posts by Nick Harland →