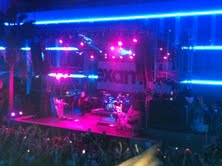 The last time I had the pleasure of experiencing Ibiza Rocks was back in 2007 when The Zutons took me and a couple of pals along for their gig. On that occasion the night ended up with various hilarious scenarios, including getting spiked by an A list celebrity, the singer (who, for his own credibility will remain unnamed) of a well known band (not the Zutons I may add)  pulling a 6 foot black transvestite and a grand total of 0 hours sleep for the following 2 nights. When I took a call a I lay on the tranquil Cala Comte beach asking if I’d like to like go along to that night’s, gig the shuddering memories of that night 5 years ago came flooding back, but it wasn’t gonna put me off.So the speedos were replaced with evening wear and we were en route to Ibiza Rocks hotel for Example and Azealia Banks. To get to Ibiza Rocks hotel you have to fight (almost literally) your way through the posse of bell ends that the chavtastic west end attracts. No shirts, tattoos designed by David Blunket and vomit on the paths are the order of the day here.

It’s worth it to get to the venue though. I’d stayed in this hotel years ago before it was taken over by Ibiza Rocks and I was intrigued to see how they would be able to hold gigs there. Simple, just cover one pool and knock a massive stage up. No good If you’re a resident after a quiet night (as I’m sure no one in this place wants!) but it’s spot on for punters. Easy to get a beer, reasonably priced and great views for the bands.

Unfortunately Azaeila Banks had to pull out a couple of hours before she was due on with exhaustion from the previous night’s gig at Mallorca rocks. Although this was a let down resident DJ, Doorly did a sterling job in appeasing the crowd with his set. Well worth a watch is Doorly if you get the chance, not just for his set but also his scratching with his mouth and mixing whilst turned backwards…

Now I’ll have to be honest and say Example would not normally be my cup of tea to listen to on record but the 30 year old west Londoner certainly knows how to get a place going and with this being his 4th consecutive year at ibiza rocks he knows what the Ibiza crowds are after. The whole hotel was bouncing as he pumped out a few numbers from forthcoming album “The Evolution of Man” and the number one hits including “Stay Awake” and “Changed The Way You Kissed Me” as well as other crowd favourites “Hooligans” and “You Don’t Have To Whisper”. A triumphant set and I’d Wager he’ll be asked back next summer to make it 5 years on the bounce.

We left as the final note still rang round the hotel and got a taxi for the short ride up into the hills to Pikes Hotel for the aftershow. What a gaff pikes is! A 500 year old establishment steeped in history (Wham! did the Club Tropicana famous pool scene here) and the place is an institution on the white isle. I’m afraid The ongoings we got up to at pikes will have to wait another 5 years or so before I feel comfortable about putting them in print! Let’s just say it was a eventful and  amazing night and leave it at that….
Ibiza Rocks, Gigslutz loves you X