It’s been almost 25 years since Manchester’s Paris Angels released their seminal track ‘Perfume’. Following the release of their debut album ‘Sundew’ the band split in 1992 after disputes with their label Virgin EMI and their “long lost” follow up album was locked away never to be heard… Until now…

The band briefly reformed in 2012 to play a charity show for their drummer ‘Big’ Simon Worrall to help pay for his funeral costs and now on the anniversary of his death they have released their second album ‘Eclipse’ via their Bandcamp page as a free download. They have also shared new videos for their tracks ‘Door To The Summer’ and ‘Compelte Mind’ which you can view by scrolling down below 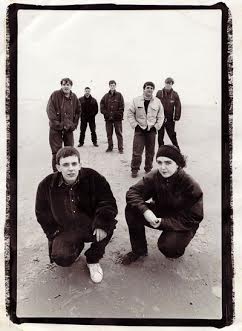 Hi Angels, how are you today and where can we find you answering these questions?

SCOTT: Good morning Gigslutz, I’m fine thank you I hope you are in good fettle. You find me in my kitchen on a fine sunny day up in the hills of the West Pennine moors

You are releasing new material for the first time. What made you want to release this now?

SCOTT: Well it was getting back together for Big Si’s memorial gig, (more on that later) Paris Angels were a close knit gang, more like a family than a group of musicians, and with family you can fall out, and we left Paris Angels, on not bad terms but it finished leaving it kinda unfinished, unresolved and unloved (up). So when we got back together in 2012, the old connections we felt, resonated and were given fresh impetus. That’s when talk of looking at various tapes people had started to gain momentum, admittedly a slow momentum (given this is now three years hence) but wheels started to turn. We realised after 20 years had passed that there were some really great songs that, due to technology, legal wrangling, never saw a release. Now we can self-publish, and it will give the people who liked the Angels a chance to see where we were heading in 92, also it gives the band a proper full stop.

How will the “lost tapes” be made up? Will they be a selection of takes from the BBC sessions etc or will it be the long lost second album? Or maybe a mixture of both?

SCOTT: The LP will be called ‘Eclipse’, this is due to the songs being in the shadows for 20 years but also we lost some good people directly involved with the band, namely our drummer Big Si Worrall in 2011, who was a man mountain and one of the funniest people I have ever met. Paul ‘Simi’ Simpson who was our lighting engineer but also a Svengali type figure that, was our kind of guru in a way, wise beyond his years and some of the songs on ‘Eclipse’ were directly influenced by his suicide on New Years eve 91/2. Barrington Stewart who sang on ‘Complete Mind’, and toured live with us. He was singer for Loopzilla, and his brother Laurence and Simon Crompton produced ‘Eclipse’, Barrington brought the soul to the Angels. So in answer to your question there will be 9 or 10 tracks from our sessions before we split, and at some point BBC sessions and live tracks will become available.

What can fans expect from the tunes – do they pretty much pick up where the band left off or are there any surprises in there?

SCOTT: The first LP was mainly written by Wags, Rikki and me and Eclipse, the whole band started to bring things to the table, also it was a time of experimenting with who we were as a band. We always had an eclectic and wide ranging musical reference map, so fans can expect a range of music from pop, rock, funk and Tibetan flute music, which our Roadie Nick was heavily into.

JAYNE: Second album / ep as Scott says was a collaboration of all the band members different musical influences hence the diversity in the sound

You last played back in 2012 which left fans wanting more – will there be any live shows to come to support the release?

SCOTT: The short answer is no. If we’d been known for than just ‘Perfume’ then maybe but we got back for Big Si and John Peel’s Unpeeled festival and it was a fitting end. We are very flattered that we have been asked to do gigs and festivals like Shiiine though. Also seeing tweets when ‘Perfume’ is played on BBC is nice, seeing as ‘Perfume’ is now 25 years ago!.

JAYNE: The Angels were a big part of all our lives at the time… the reunion was for Big Si and was a fitting tribute to him…

The industry must have changed beyond recognition since you guys started out, as highlighted by pretty much “giving away” the new release. What is your take on the current state of the music industry?

SCOTT: Yes ‘Eclipse’ will be free, we had looked at a proper release with a label but in the end we just want it to be out and done with in a way. I think the music industry is in a very healthy state for bands getting their music out there, but unfortunately it is a business and the people who own it have a bottom line. It would be great to make music AND make a living, but without turning this interview into an anti-capitalist debate, you’d hope that bands today can make their way. It’s funny to see bands dressing like how we dressed in the late 80s, the wheel turns full circle once more.

Looking back at the “glory days” – do you have a particular stand out moment from back in the day?

SCOTT: Yes one moment etched is, when we were recording at Suite 16 at Hooky’s studio and we received the 12” of Perfume from the pressing house, that was the realisation of everything from first getting a bass at 15, being in various bands, to my first single, which I’d co-written. Perfume was a riff on Wag’s piano at home that he’d been playing with and then he transferred it to guitar (Wags was one of the finest lead guitarists of our generation, very inventive), I went away put a chorus and middle 8 to it and Rikki wrote the lyrics, (hopefully a rehearsal video will be out of the original) but it really came to life in the studio when Tajti and the producer Michael Johnson (Blue Monday engineer) added the Moog synth – we were all into ‘I Feel Love’ and Kraftwerk and it was added in Tajti that gave us the edge.

JAYNE: Perfume was our anthem once Michael Johnson put his edge on it the buzz from the dance edge and keys panning from side to side alongside Wags guitar riff… this is the tune that can take you right back into the mood at that time.

What was your favourite ever gig you played?

SCOTT: There were many gigs that remain lodged in my ageing memory and a lot that that have vanished but playing with World of Twist at our first London gig was great, it was a very hot night and we took a coach full of friends. Also the gig at ICI London, we really played well, there was a stage invasion, really euphoric, the NME slated it (I met the reviewer years later and he said he was sent to review us as they knew he hated us) but I remember it to be a great night. In Manchester we played nearly every venue but the gig for me was at International 2. I’d seen all the great Manchester bands play there, and when we sold it out, there was a real buzz when we played, including a lad called Wilba diving from the balcony! It felt like we had proved that we were a good band.

Do you feel there is unfinished business? There is certainly still people wanting to see the band play live and hear more music – could a full reformation be on the cards?

SCOTT: For me no – we were unfortunate that we didn’t carry on but it was a catch 22, too big with 7 members to survive on an indie (when we were on Sheer Joy we were skint) but too Indie for a major label, the timing wasn’t right, you have to be able to accept when you’re dealt. I have made a good career as a graphic designer, I went on to play with some great bands that also didn’t get anywhere, though Seventh House my last band should’ve stuck with it as singer Rod Smith is Manchester’s biggest secret, he is amazing. So I am happy with the fact I got to do Peel Sessions, recordings, mad tours with great people, with a whole book of memories and anecdotes, it does feel like someone else’s life though, it was so long ago!

SCOTT: Yes I would like to say thank you for all the kind words we have received mostly about ‘Perfume’ and how it had an effect of people – it means in very small way we have become part of the cannon of indie music, and that means a lot to me. I don’t really talk too much about it any more but doing this interview has given me a brief reflection on what is a past life for me – I wish you and your readers a good day!

JAYNE: We had an awesome time to be part of the Madchester scene and I’m sure fans will appreciate the ep and where we were at that time. Sometimes it does feel like a dream . A massive thanks to everyone that appreciates our music and that can relate to one of our tunes to a moment in their life. Huge thanks to you and your readers

ALBUM: Jess Glynne ‘I Cry When I Laugh’