Where: 25 venues across Camden, London

Headliners: Feeder, The Coral, The Damned, Reverend and the Makers, Carl Barat and the Jackals…

Also Featuring: The Rifles, Milburn, Pulled Apart By Horses, The King Blues and a whole host of new bands

A Brief History: Following a century that’s seen Camden Town as the hub of the UK’s rock ‘n’ roll scene – from the Camden Theatre opening in 1900 to the arrival of Britpop in the 1990s and today’s continually thriving scene – Chris McCormack launched Camden Rocks as a salute to the country’s finest young musical talent, aptly hosted in the most vibrant live scene. From 2009, which saw Pete Doherty and Carl Barat headline, to this year which sees Carl return alongside a host of fresh faces, Camden Rocks is an ode to British live music as a whole.

How To Get There: Camden’s in the heart of London, so it’s easily accessible on public transport. The three closest tube stations, all on the Northern Line are: Chalk Farm; Camden Town; and Mornington Crescent.

Gigslutz Top Tip: As with any inner-city festival, running between venues is tiresome. Check the Camden Rocks site a few weeks before the event for stage times and try to plan ahead. Also, as always, try and catch bands you’ve never heard of or seen before. It always pays off.

Memorable Moments: As expected in Camden, the festival is never short of chaos (see Itch (King Blues) breaking his foot after diving from a balcony). It’s also never short of surprises, with 2015 seeing the ‘secret headliner’ announced as Bullet For My Valentine just two weeks before the event. For those there it was definitely memorable.

Did You Know? Organiser Chris McCormack hosts over 300 gigs throughout the year across Camden to find new talent; this talent makes up a large percentage of the acts at the festival. Also, this year the prestigious Koko has been added to the venue list!

How To Get Tickets: Tickets are selling fast, so nab them while you can from the Camden Rocks website. 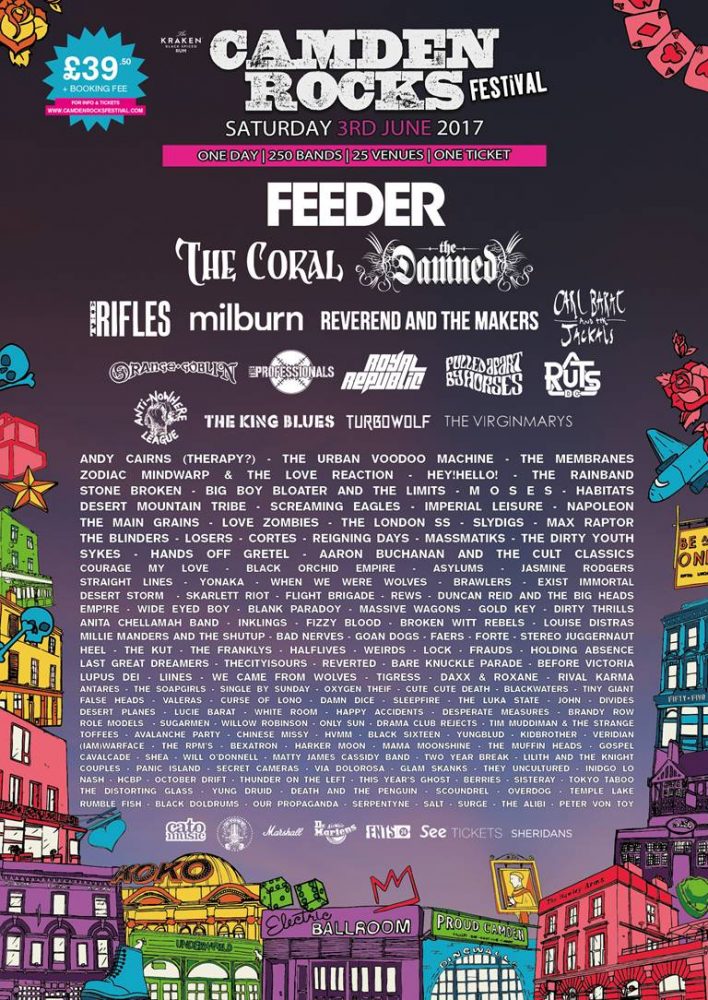