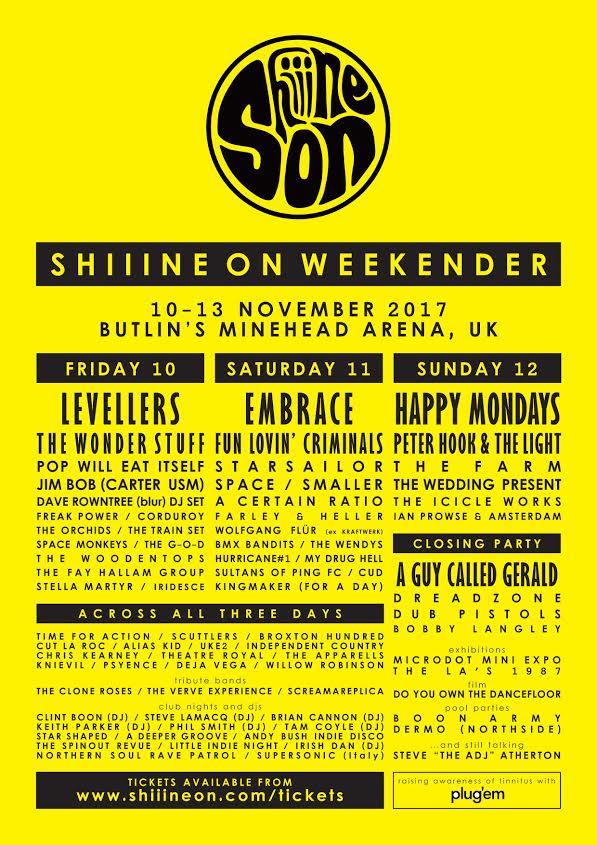 Brief History: Shiiine On has become THE platform for the ultimate indie party over the last couple of years. Alongside the weekenders they have also hosted boat parties along and cruises, all with live music and DJs. The weekender though is the ultimate for true indie fans. Some huge bands have already graced the Minehead stage including Shed Seven, Cast, Inspiral Carpets, Echo & The Bunnymen and Happy Mondays, with the later returning for a second time this year.

How To Get There: The best way to get there is by car with free parking provided, if going by train the nearest station is Taunton. Plenty of people fly in from abroad for this festival with Bristol airport only an hour away.

Gigslutz Top Tip: Take your swimwear! The Shiiine On pool parties are a thing of legend and this year sees all round legend Clint Boon and Dermo from Northside take to the decks in the pool.

Did You Know: Shiiine On has been nominated for best small and best metropolitan festival at this years Festival Awards. You can vote for them HERE

What Was Said Last Year?

“I’ve just returned from three days of debauched baggy madness at the Shiiine On Weekender held at Butlins Minehead. It was my fourth time festivalising at Minehead, (a trio of ATPs before this), but Shiiine was by far the best.

In fact, with a friendly and up-for-it but well-behaved crowd, a truly brilliant line-up and a lovely chalet that was so close to the action I could easily nip back for a wee, I might even say it was my favouritest festival ever.”

“Of the three important music weekenders Butlins arrange in the year, Shiiine On in Minehead has emerged as the most popular, possibly due to its more sweeping focus and the encompassing of bands on the more conventional side of the indie spectrum. Shiiine On is a time to come together, and celebrate”

How Can I Get Tickets? Tickets are available HERE

LISTEN: The Assist release new single ‘Give It To Me’

This Feeling Track of the Day : Kid Kapichi ‘Waster’