SlamDunk is back! The number one pop-punk, rock and alternative festival will be taking over in both Leeds on 25th May and Hatfield on 26th May, featuring the same line up for both days, giving people all over the country the opportunity to attend.

Starting off as a nightclub in the earlier noughties, SlamDunk has been running as a successful festival since 2006 and this year will be outside on both sites. 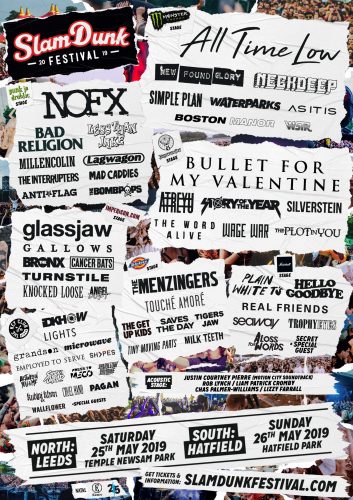 Who: Featuring All Time Low, Neck Deep, NOFX, Boston Manor, and also a secret band that has been teased by Slam Dunk as an arena-headlining act.

Price: Tickets are priced at £64.90 for the day and can be bought here:

How To Get There:

South Site – The train station by the site can be reached using Oyster from Kings Cross Station in London or there will be parking available.

For both sites, the Big Green Coach is also available to book to take you straight to and from the festival.

We Recommend: Downloading the SlamDunk app so you can stay up to date with when bands are starting, what stages and any announcements that are made.

This Feeling Track of the Day: The Modern Strangers ‘Magic Hour’