Nonchalant in its ever-growing power, When In Manchester returns to Northern Quarter on April 14, 2018, for yet another day of raucous carnage.  As always, a salmagundi of music styles is present, with Hey Charlie, Nova Twins and The Big Peach taking up top spots on the bill. 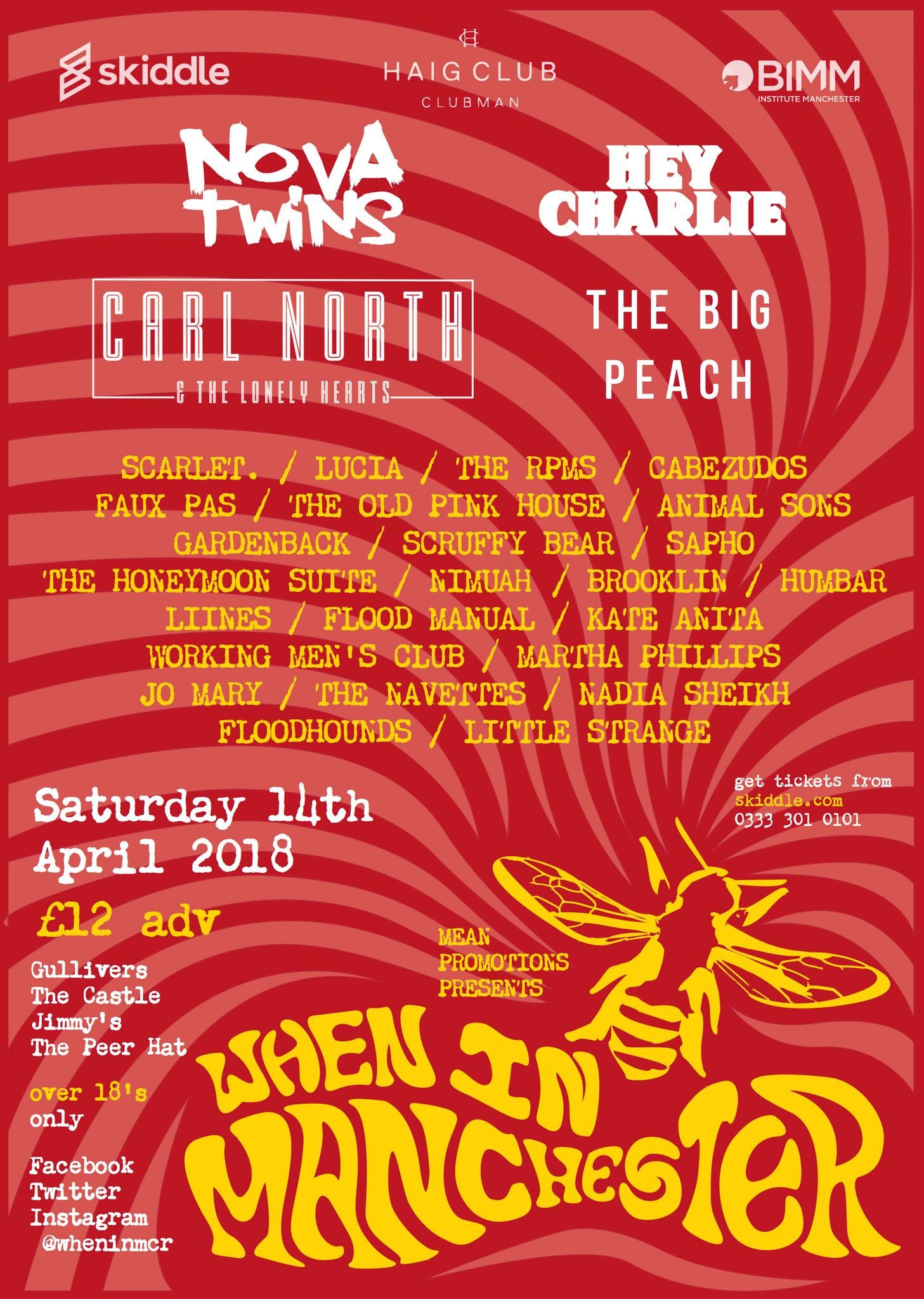 This years edition of WIM will see the Oldham Street veterans, Gullivers and The Castle, Jimmy’s Bar on Newton Street and The Peer Hat (found tucked away on Faraday Street) playing host to eager festival goers who are poised and prepared to find their new favourite artist.  As well as having acts performing in four premier music venues, WIM will be operating in association with Skiddle, BIMM Manchester and Haig Club Single Grain Scotch.

Headlining WIM 2018 is boisterous South London duo, Nova Twins, alongside cool cats Hey Charlie, outspoken Manchester heroes, The Big Peach and the mega Carl North & The Lonely Hearts.  These championed bands will each play a special slot at one of the four Northern Quarter venues; making it almost impossible to decide upon which one you will be ending your day at WIM with.

Elsewhere on the lineup, expect to be hypnotised by Merseyside’s SAPHO who are back for round two at WIM, Scruffy Bear, Manchester’s answer to post-punk, LIINES, Flood Manual, the feel-good Old Pink House, Cabezudos and Derby’s own stellar unsigned band, The Honeymoon Suite.

Another notable attribute contributing towards WIM being the only festival you need to kick off your season in the sun is its dedication to providing a platform for gender equality in the music industry.  While gigantic festivals across the UK are pledging to create ‘equal lineups’ by the year 2020, WIM is making the fat cats in the industry eat their words, by already having produced bills over the past couple years featuring over 70% of acts with one or more female members.

This year, of course, is no different.  Be prepared to be blown away by the singing/songwriting goddess, Martha Phillips as well as The Navettes, Jo Mary, Kate Anita and so many more brilliant female artists.

Start your festival season in utter style, uncover your favourite new artist and the next generation of festival headliners.  When In Manchester takes place in various venues throughout Manchester’s Northern Quarter on April 14.  Tickets are available via Skiddle, now.

This Feeling Track of the Day : Georgie ‘Be The Fire’