Within the confines of Dingwalls, Camden Town, the Motown and Northern Soul classics beneath the dimmed red lighting set the scene perfectly for what is to come and the shady intimate venue is ideal for two artists that do not seem of this era.

Findlay is already massing up some big name support slots including Jake Bugg, Miles Kane, and the Courteeners. Supporting Bugg at Ibiza and Mallorca rocks,  a venue where last year the afore mentioned Jake Bugg, a relative unknown, opened for Ben Howard to then headline a year later. With an ever growing momentum, will this pattern continue for Findlay?

Based on this performance, there no reason why not.

After a hectic schedule of following Mr. Kane on his tour as well as returning on the day from Mallorca and Ibiza rocks there were no signs of fatigue. A stripped down garage and blues style reminiscent in aspects to Patti Smith, with gritty vocals accompanied by two guitars, and a drummer in a rather magnificent scarf.

Charging out the gates with ‘Fever’, its hypnotic slow building verse entrances the gig early comers into a hypnotic state, bobbing and swaying to the flow of the garage rock stylings, before exploding into the frenzied chorus as the tone for the evening is set. This is followed by ‘Your Sister’, the gravelly voice of Findlay driving the song forward supported by the steady beat of the drums and the strum of the ragged guitar, akin to Bowies Gene Genie, this was the peak of the set displaying the full raw force of Findlay’s capabilities.

Mid Set and a third guitar is introduced in to the mix for ‘Stoned Alone’. The pace slows from the previous tracks, throwing in some cheeky riffs on top of the bluesy sounds. Penultimately there is a preview of a new song named ‘Recent Love’ which is again toned down and wouldn’t be out of place on Pink Floyds’ Brick in the Wall album.

Findlay ends on a loud note, to truly sear the performance into memory with ‘Off And On’ from the EP of the same title. A strong end to a short but memorable set as the stage emptied to deserved applause.

A cracking display by Finlay and Gigslutz cannot wait to catch her again.

Following more Northern Soul Miles Kane takes to the stage launching into ‘You’re Gonna Get It’. Despite this being a tour named after his current album Mr. Kane did a fairly even split between current and old album tracks, but when a debut receives such acclaim it would be silly not to. 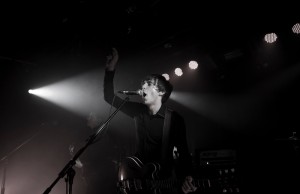 As the set progresses the beer glasses fly, sweat runs and the already zealous crowd reaches a new level as the noticeable riff of ‘Inhaler’ erupts. The gig plays to a close with ‘Come Closer’ but there is no sign of movement towards the exits, as the crowd waits in anticipation for the encore. This consists of an acoustic version of ‘Color of the Trap’ followed by a full force return for the final close ‘Don’t Forget Who You Are’.

Guitars are downed, the final cheers of the crowd fade and exits are put to use. All in all a memorable performance and great show from two great artists.