My urge to write this is borne as much out of my frustration of what Biffy Clyro have become as it is my undying appreciation for what is an exquisitely crafted and greatly underappreciated experimental rock record. 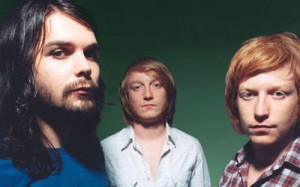 Despite their ventures into more commercial enterprises, ‘Infinity Land’ clearly still holds a special place in the hearts of the Biffy boys. Lead single ‘Glitter And Trauma’  is an omnipresent fixture on setlists and fan favourites ‘Strung To Your Ribcage’ and ‘There’s No Such Thing As A Jaggy Snake’  have brought the band’s little known post-hardcore exploits to many an arena in recent times.

The aforementioned two songs form arguably the most fearsome pair you’ll ever hear from the Scottish rockers; ‘Jaggy Snake’ is nothing short of petrifying at times as Neil switches to all-out fury mode, screeching out lyrics as scathing as ‘Simply put you’re a fuck up’ – how charming.

‘Strung To Your Ribcage’ – number two on the album – is an equally eerie journey into a gloom-filled world where hellish guitar strumming and savage drum battering somehow cede to expertly misplaced emotive vocals describing themes of love and jealousy, with the odd dose of screamo-inspired throat murdering thrown in of course. It’s a beautiful melange of wide-ranging musical elements that bind to form one of Infinity Land’s undoubted high points.

Yet no better is this record’s diversity summed up than ‘Strung To Your Ribcage’s’ placement. The brash, unforgiving two-and-a-half minute blast is sandwiched delicately between the infinitely more radio-friendly ‘Glitter And Trauma’ and ‘My Recovery Injection’. It’s no great coincidence that these were the two highest-charting singles off the album at numbers 21 and 24 respectively. Listen carefully to the latter and there’s a fair touch of that oh so familiar modern day, anthem-busting, festival-stunning Biffy. Their recent foray into the high end of the charts isn’t just a sudden surge; it has been years in the making.

This too is a record on which the raw emotion portrayed through Simon Neil’s lyrics is at its peak. From the simple yet heart-wrenching woe of ‘Got Wrong’ to the equally moving bluntness of “I don’t wanna die, don’t expect me to die” on ‘The Atrocity’, ‘Infinity Land’ never strays far from deep sentiment. The latter song’s tenderness is only strengthened by the sombre piano intro and intermittent sad whistling of wind in the background. It’s exactly the kind of impeccably composed piece of music on which the Ayrshire trio pride themselves.

What they also pride themselves on – perhaps more than anything – is their thrilling unpredictability and tendency to keep even the most avid of fans on the very tips of their toes. After the subdued down time on tracks four and five, ‘Some Kind Of Wizard’ signals a scintillating return to this album’s fiery underbelly. Punctuated by spiky riffs, juxtaposed against subtle cymbal tapping, and with numerous up and down shifts in tempo, it’s as archetypically Biffy Clyro as you’re ever going to get instrumentally.

Only half way in and Biffy leave listeners just as bamboozled as ever; just what is their sound? There’s certainly not sufficient congruity in the tracks of the album so far to place the band into any one genre. But is it really anything more than experimental rock as I mentioned at the outset? 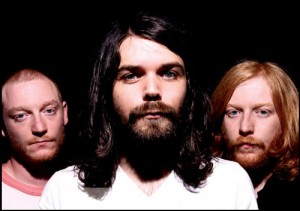 Whatever musical faction you desire to file it under, ‘Infinity Land’ will no doubt have a profound effect on you. Whether it wows, unnerves or downright terrifies you – the cover art itself could do that – this record is the definitive Biffy Clyro experience. Forget the sugar-coated semi-rock of ‘Only Revolutions’ and ‘Opposites’; this is the mighty Biff, unmasked, unrefined and there to be savoured every bit of the way.

There really is something for everyone here, from the thrashy scream-laden pseudo-terror of ‘Jaggy Snake’, to the unpredictable undulation of ‘Wave Upon Wave Upon Wave’, to ‘Only One Word Comes To Mind’ and its distinct echoes of the band’s earliest works. This one really could have walked straight out of ‘Blackened Sky’ with its delicate string intro and Simon’s trademark anguish-ridden velvety tones – which somewhat inevitably evolve into yet more shrieking late in the song.

‘Infinity Land’ might lack the instant charm of Biffy’s last two albums that has seen their popularity skyrocket to unprecedented heights, but scratch beneath the surface and it’s as good an LP as they’ve produced in a career spanning almost two decades now.

As I said at the start, their recent ventures into substantially more mainstream territory are somewhat frustrating when you look at their past glories, and whilst the modern Biffy Clyro are by no means bad, you miss out an awful lot by not delving into their back catalogue. ‘Infinity Land’ is the crème de la crème and the optimal starting point for exploring Biffy’s roots.

Features
biffy clyro for the record