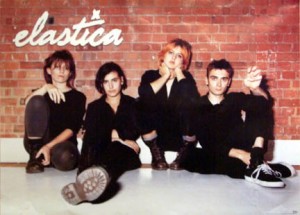 The brooding nonchalance. The kohl rimmed stare. The early introduction to A/B coupling at its finest: “No need to whine boy, I can hear that voice you use upon the phone, And there’s no need to be coy, that is something you can do upon your own”.) Sure, we liked Louise Weiner (maybe her candid-and vastly overlooked- literary prose a little more) and we shouted our love from the rooftops for Saffron Sprackling but with her flopping pageboy main and black denim drainpipes, Frischmann was the archetypal punk heroine of the class of ‘94. A love affair built on cigarette smoke, illegal highs and dingey all nighters, Elastica’s eponymous debut cemented the band in the doe eyed ranks of cool Britannia. 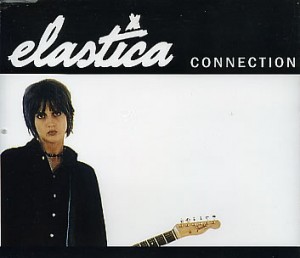 At a time when fellow Brits The Stone Roses and Oasis were taking on the US charts, on English shores we find something of a love triangle. For at the heart of Britpop laid a notorious rivalry between Suede’s Brett Anderson and Blur’s Damon Albarn and lighting the fire of that feud was founder of Elastica and lover of both, Justine Frischmann. Love affairs aside, there were other tumultuous relationships for Justine to nurture, continually competing with then-guitarist Donna Matthews’ as her competitive nature towards the song manship continued to rise up. It wasn’t surprising then that when the band released their sophomore some five years after their debut, it was met with more than a bit of trepidation. Long gone were Matthew’s angular hooks and, instead, The Menace madly tottered between jittering keys and nonsensical harmonies. Taken out of context, this isn’t a bad record but for those fans wanting to relive the indie prowess of their ‘95 debut, they were sorely disappointed.

As debuts go, it’s all too easy to be enamoured by the sheer punk brilliance of old friend ‘Annie’ and the thrashing haze of ‘Vaseline’; both tracks ushered in with an unsettling immediacy clocking in at just under a minute and a half. Probably the band’s most commercial hit (and far too often snubbed as “that song from Dom Joly’s Trigger Happy TV”) ‘Connection’ remains a dancefloor lure to even the coolest of kids with its jagged guitars and Frischmann’s signature snarl, whilst the humdrum normality of ‘Car Song’ doffs its cap to you with a Peckham Springs swagger: “You can call me a car lov-ah, ‘Cause I love it in a mot-ah” 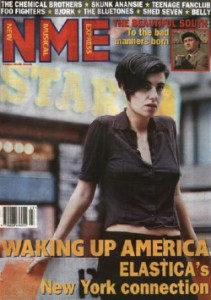 But it’s that standard mid record lull where this album really starts to quake. At a time when most albums would be on the home straight towards a meandering outro, Elastica kicks on the overdrive as ‘Blue’ topples out over a Coxen-esque chord progression. With no sign of stopping, ‘All Nighter’ dives in all teetering ride bells, fags and a cup of tea and ‘2:1’ serves up a similarly humaine honesty as Frischmann’s deadpan lyricism rings out over staccato strums: “You talk too much / It’s not necessary”.

Not content to exit on anything short of genius, ‘Never Here’ satiates the die hard record fan’s need for that languid outro as Frischmann opens up with some bright beginnings quickly turning sour, having lent and sold her lover’s records in the space of two choruses (a nod to her and Brent’s former petering cohabitation? “I moved straight into your shoes/I took up your cause and answered your phone/I couldn’t really imagine/ What life was like when I was alone/Then I started to worry/I thought of our lives left on the shelf/Too much TV and curry/Too much time spent on ourselves”.) 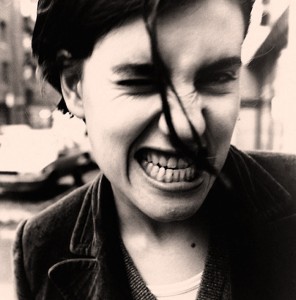 Swooping in boldly to end the record’s B side, ‘Stutter’ is a two minute, tongue in cheek, booty call baiting show of, probably the closest you’ll come to, Brit rock’s feminism. Seeped in unblushing put downs (“Like a wind up toy you stutter at my feet”) and brazen retorts, (“Is there something that I can do for you?”) Elastica went to prove that 1994 was a time for the Common People, of cigarettes and alcohol and of albums like this.

Nearly twenty years on from its first release, Elastica’s debut has stood the test of time in style. And it’s not a jot less cool.

Elastica’s eponymous debut will be re-released via Kanine Records.

View all posts by Cheri Amour →