Few bands can claim a history quite as turbulent as Jane’s Addiction. In the nearly 30 years since originally forming in 1985, the band have gone through three break ups, almost endless line-up changes and only managed to produce four studio albums (with only the first two receiving any sort of critical acclaim). Despite this, they still seem to crop up in numerous ‘greatest-ever-rock-bands-you-must-listen-to-before-you-die’ type lists, occasionally picking up accolades such as the NME Godlike Genius award in 2008. 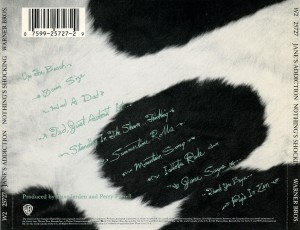 However, numerous attempts by lead singer Perry Farrell to salvage the band since their original break up in 1991, have mainly been met with embarrassed grimaces by those who remember their former glory.  As a longstanding Jane’s Addiction fan, I’d rather remember them for how they were than for what they’ve become. 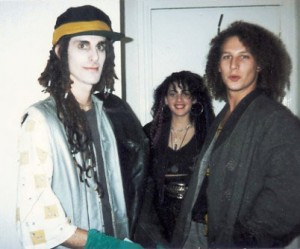 I didn’t hear this album for the first time until 12 years after it was originally released, in simpler days of dial-up modems, when most alternative music discovery took place rummaging in dusty record shops and watching almost endless hours of MTV2.  What struck me about them was that they felt to be making music about something really real. The subject matter ranges through sex, drug addiction and violence in a way that isn’t intended to shock, but is an authentic window into lives that could have only been lived out in 1980’s downtown Hollywood.

There’s more substance to this album though than just attitude and atmosphere. The quality of the musicianship is incredible throughout, from Dave Navarro’s endlessly satisfying virtuoso guitar solos, to Eric Avery’s rich, velvety bass lines. Perry Farrell’s wild, wailing vocals, which can often be a point of annoyance for the band’s critics, are technically brilliant and completely unique, often adding an extra layer of instrumentation rather than merely delivering lyrics.

It’s clear that the album has been considered as a whole, rather than just being a collection of songs, from the lyricless ‘Up The Beach’ which acts as an extended introduction, before leading into the amazingly gratifying ‘Ocean Size’, which crashes in like a giant wave breaking over you.

‘Summertime Rolls’ provides a gentler break from some of the preceding harder hitting tracks of ‘Ted, Just Admit It’ (which was also brilliantly remixed by Trent Reznor years later for the Natural Born Killers soundtrack’) and ‘Had A Dad’. Starting with just a beautifully simple bass line, the track seems to swell and build for its entire 6 and a half minute duration, allowing the listener to feel Farrell’s need for escapism from some of the other darker subject matter that’s visited elsewhere on the record.

The last three tracks on the album are a testament to the range of styles the band seem to master on here, and it’s clear to see how some of their successors were directly influenced by them; from the ‘Jane Says’, shows that they don’t need to rely on fancy musicianship either, most of the song relies on just two chords, with steel pan drums helping to create a dreamlike atmosphere to this melancholy tale of addiction.

‘Thankyou Boys’ a lounge style interlude, that although frivolous, was obviously a big influence on subsequent metal bands such as Faith No More, and although stylistically a world apart, it links through to the final track on the album seamlessly. Listening to ‘Pigs in Zen’ it’s difficult to believe that it was written three years before Rage Against The Machine ever formed.

Listening back to the album now, I’m struck again by how many of their contemporaries they pipped to the post with their merging of genres, from rock, funk, metal and psychedelia.  With this album and its follow up’ Ritual De Lo Habitual’, they managed to make a massive impact on the face of alternative rock. Yet it so easily could not have been the case; in its first year of release Nothing’s Shocking struggled to sell more than 200,000 copies and peaked at just 103 in the Billboard charts. This was due, in part to the first single Mountain Songs being banned from MTV for featuring full frontal nudity in the video and the naked plaster cast of Farrell’s girlfriend that featured in the cover art meant many shops refused to stock it.

Not willing to give up, the band went on the road supporting Iggy Pop and the Ramones and by the end of the tour they were headlining their own sell out shows in clubs and theatres across America. Their success grew and grew quickly over the next three years, with their second album ‘Ritual De Lo Habitual’ producing some smash hit singles in ‘Stop!’ and ‘Been Caught Stealin’’, however relationships within the band were rocky; onstage fights and spiralling heroin additiction soon led to bassist Eric Avery and guitarist Dave Navarro leaving the band in 1991. 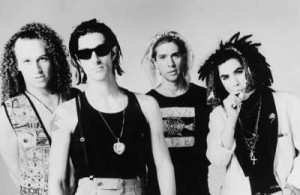 Yet, despite several attempts to reform, it’s as if they just burnt themselves out in that first incarnation, and it’s as if Nothing’s Shocking is a snapshot captured in time that so easily could have failed to happen or failed to be noticed, but instead managed to help inspire a whole range of influential bands, such as Smashing Pumpkins, Nirvana, Nine Inch Nails and paved the way for a generation of alternative rock to follow. For that reason, despite a somewhat tarnished reputation now, Nothing’s Shocking should not be forgotten.

Features
for the record janes addiction

View all posts by Ami Lord →