‘The 2nd Law’, ‘The Resistance’, ‘Black Holes And Revelations’ and ‘Absolution’ were all explosive UK Number Ones; ‘Origin of Symmetry’ was so huge it was played in its entirety at Reading Festival back in 2011; ‘Showbiz’ never gets a look in. It’s about time it did.

Muse’s first album is all too often overlooked due to the shadow cast by its five overwhelmingly successful follow-ups. But its Platinum rating isn’t there for nothing; it tells you all you need to know – ‘Showbiz’ is a quality record and not just one for insufferable Muse die-hards. Bearing many of the hallmarks of the later works which have seen the band gain such a vast global following, it’s a wonder it still lags behind them in terms of popularity and exposure. 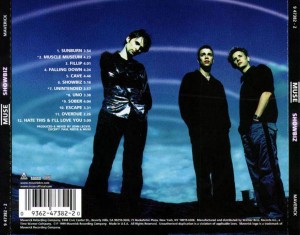 Much like ‘Origin of Symmetry’, ‘Showbiz’ gets going with the gentle rhythmic twinkling of piano keys on ‘Sunburn’. Don’t be fooled by that though; this is a track that soon scorches with the same ferocity as its title’s ailment. ‘She burns like the sun’, hollers Matthew Bellamy, in a manner reminiscent of the grunge movement several years prior to the album’s release.

This is the record on which Muse’s wide-ranging influences are – perhaps expectedly – rawer and clearer than at any other time in their career. Nirvana, Radiohead and Queen are just a few of the legendary 20th Century artists who come to mind over the course of ‘Showbiz’. The epic, operatic and at times out-of-control rock quality throughout sets the tone for the enigmatic Devon trio’s future works.

‘Muscle Museum’ follows ‘Sunburn’ with an eerie sound that would sit right at home in a sci-fi film – Muse’s ‘space rock’ tag is justified even in the dawn of their career. We also find a substantial helping of angst which continues into track three ‘Fillip’ and its desperate chorus. It’s a wonder this never features on setlists; well-known it may not be but stadium-shaking and festival-charming it would. This is a song which is not just a gem of the album but of the group’s entire back catalogue.

In fact, it’s the first of many underrated Muse tracks present on ‘Showbiz’ that time seems to have forgotten. The meticulously pieced-together ‘Falling Down’ is another of the band’s many slower, melancholy masterpieces, the like of which they seem to omit from recent LPs. Yet it is one of the rare moments when ‘Showbiz’ strays from its underlying intensity; for the most part this is a record intent on throwing the listener full pelt into Muse’s warped world. Bellamy is at his scathing songwriting best on ‘Cave’: ‘Come in my cave and I’ll burn your hearts away’. It’s far from welcoming but such vehement barbs have become a trademark of his down the years.

After some more subdued down time on ‘Unintended’, it’s back up and at it with track eight ‘Uno’, where Matt unleashes the full glory of his vocal prowess. And just when you think he can’t exert himself any further, stand-out song ‘Sober’ ups the ante a zillion more notches – the album is swiftly gathering pace towards what you sense is an epic finale. Epic it is, but only in the most Muse-ical of ways…

‘Escape’ is a slow-burning three minutes of raw, verging on tear-jerking emotion, perhaps the first time Muse truly delve into the realms of love as a theme for their music. “Why can’t you just love her” pleads Matt in another chorus of draining despair. Swiftly following is ‘Overdue’, a two-minute blast of rock energy that comes to an abrupt halt to set up track twelve. Hate This and I’ll Love You is a perfect embodiment of that operatic rock quality I touched on earlier. From the chirping of crickets at the outset to the soaring crescendos and dizzyingly high vocals throughout the body of the song, it’s a sign-off the like of which only Muse could produce. 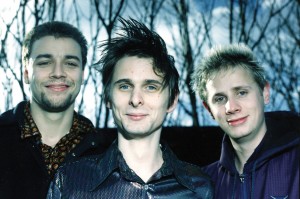 For all I’ve mentioned, ‘Showbiz’ is an album you just cannot afford to miss out on any longer. Muse fanatics will of course know it all too well and preach its greatness to those who are unaware of it, so take on board what they are saying and listen to ‘Showbiz’; just once. It will reaffirm what you probably already know about Muse but it might just throw up the odd surprise too.