Gigslutz contributor Pete Cary takes a close look at one of the albums that helped shape his childhood. Powerless of choice to what was played on the stereo of his parents car growing up, Pete was forced to listen to Talking Heads-Speaking in Tongues and the result was an overwhelming appreciation for the New York four pieces distinctive and influential classics, making it this weeks For The Record.

If, like many of us out there, you spent a great deal of your childhood sat in the back of your parents’ car listening to music from a bygone age, there’s a fair chance that one or other of those fusty old bands made its way through your inner ear and burrowed deep into your subconscious.

If, as for me, one of those groups happened to be Talking Heads, it’s also likely that you noticed rather more than you otherwise would. I’m writing here about their 1983 album Speaking in Tongues because it’s probably the most demonstrative (and possibly the most recognisable) of what the band has to offer, but the group’s sixteen-year history and ample back-catalogue produced few duds and a swell of near-unparalleled writing stock that will keep even the most worn-out record player turning beyond its natural lifespan. 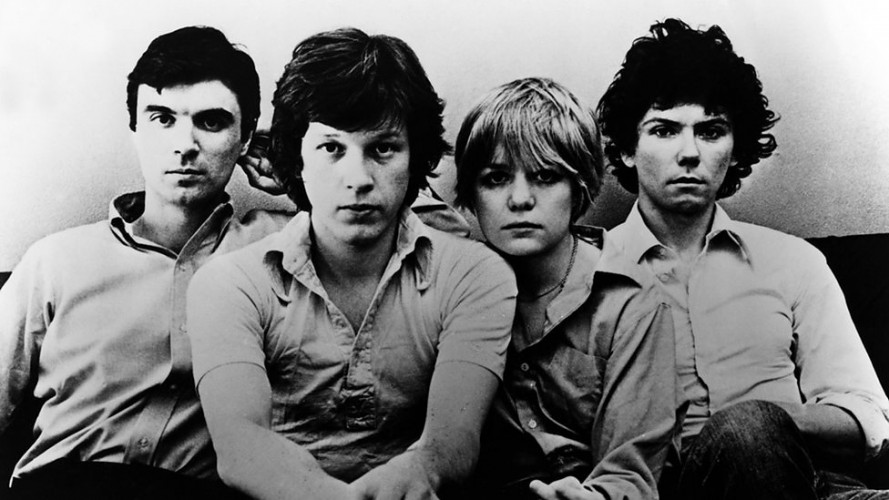 Commentators have often pointed to Speaking in Tongues as the band’s most commercially successful offering, and the only record of theirs to gain a top-ten hit in the US. Whilst these facets might explain the subsequent emergence of Talking Heads as a preeminent force in the east-coast/New Wave of the early 1980s, they’re relatively unimportant when seen in the context of their wider work: none of the records claimed a greater share of ‘hits’ in the eyes of fans than any other, and the band has become almost as famous for its live album Stop Making Sense – also, incidentally, recorded as the live accompaniment to the Speaking in Tongues tour of the same name, and the live show that the videos for this article are taken from – as it has for any studio album.

Talking Heads-Burning Down The House

Inspired by David Byrne’s garbled lyrics when working out the melodies for each new track, the album’s title hints at something secretive and ceremonial – a cacophony of raw energy, bursting through the seams of everyday understanding whilst remaining utterly incomprehensible at the same time. Be it the sharp, jangled staccato of ‘Burning Down the House’, or the brooding violence of ‘Slippery People’, the record constantly pulls in and out of focus as if the sound is being adjusted so that you lean in just at the crucial time, only to find that the thing’s screaming in your face.

Listening to Speaking in Tongues is like making your way through a wild party at a house belonging to someone you don’t know very well. The faces and characters of those you see are faintly recognisable; the atmosphere, buzzing and frenzied. You’re neither entirely comfortable, nor uncomfortable with your surroundings – and yet there is something overtly familiar about the whole thing. Have you been here before? Are you too drunk, or drugged to remember?

And then it hits you: Talking Heads are the eighties. At least as much as The Smiths across the pond and far more than any calendar-boy pop, Talking Heads managed to capture not only the ideals and aspirations of the 1980s capitalist machine (think Duran Duran’s Rio if you want to see what I’m getting at with that one), but the idiosyncratic nature of the forces against it. Speaking in Tongues charts the paranoid voices inside the everyday man’s head as he blindly lunges his way to wealth, familial stability and oblivion of the most mundane kind: a simple job, a simple house, a simple life, forever. At least for as long as he can stand it.

Despite the fact that one way or another I know every beat by heart, it’s difficult to talk about the tracks themselves, let alone explain them: I still can’t work out what any of them are. Suffice to say that after twenty seven years I’m still listening to them, still finding new colours and textures and shapes to the songs, and still thrusting my neck forward in what I assume to be a slightly disturbing chicken dance with my bottom lip clenched under my teeth. Don’t mock it ‘til you’ve tried it.

And this is really where the band remain unparalleled, because the more overt ramifications of their new-wave/electro-pop overtones still don’t come close to explaining the fantastically nuanced and interlocking rhythm that underpinned it. How, in a month of Sundays, could any but the absolute best of songwriters come up with something as purely, sadly nostalgic and longing as ‘This Must be the Place (Naïve Melody)’, or as funk-infused as ‘Moon Rocks’, and ‘Girlfriend is Better’?

In recent years, Byrne has voiced a humble reminder of the perils of being led too easily by one’s readily-available technology, stating, ‘the way that we record on laptops tends to encourage us to record in certain ways: it tends to make the songs very regular, repeatable. The tempos are very strict and steady, which at some point in the past was an ideal – but an absolutely steady tempo isn’t necessarily a good thing.’ This is a lesson that bedroom pioneers may do well to heed: the thing that made Talking Heads, Talking Heads, was a supreme and joyous ability not to play by the rules – and not always to have to be explicable or explained.

Talking Heads-Naive Melody (This must be the place)

There’s a line in the middle of ‘Moon Rocks’ that rings, ‘get ready for heavy duty/go on, give it a chance’ – and that’s about as great an explanation as you’ll get for what this album and this extraordinary group was about: the palpable excitement of breaking the mould, and doing something that you’ve never done before.

View all posts by Pete Cary →