FRANK TURNER today announces details for a 9 date UK headline tour – including two dates at London’s Alexandra Palace Theatre on November 30 and December 3, 2019 – in support of his forthcoming eighth album, ‘NO MAN’S LAND’ (out August 16th on Xtra Mile Recordings/Polydor Records). Produced by Catherine Marks and featuring an all-female cast of musicians, ‘No Man’s Land’ is dedicated to the fascinating stories of women whose incredible lives have all too often been overlooked by dint of their gender. The album is accompanied by a new 13 part podcast series, ‘Tales From No Man’s Land’ (created in collaboration with Somethin’ Else), which hit #2 on the Apple UK podcast chart upon launch. 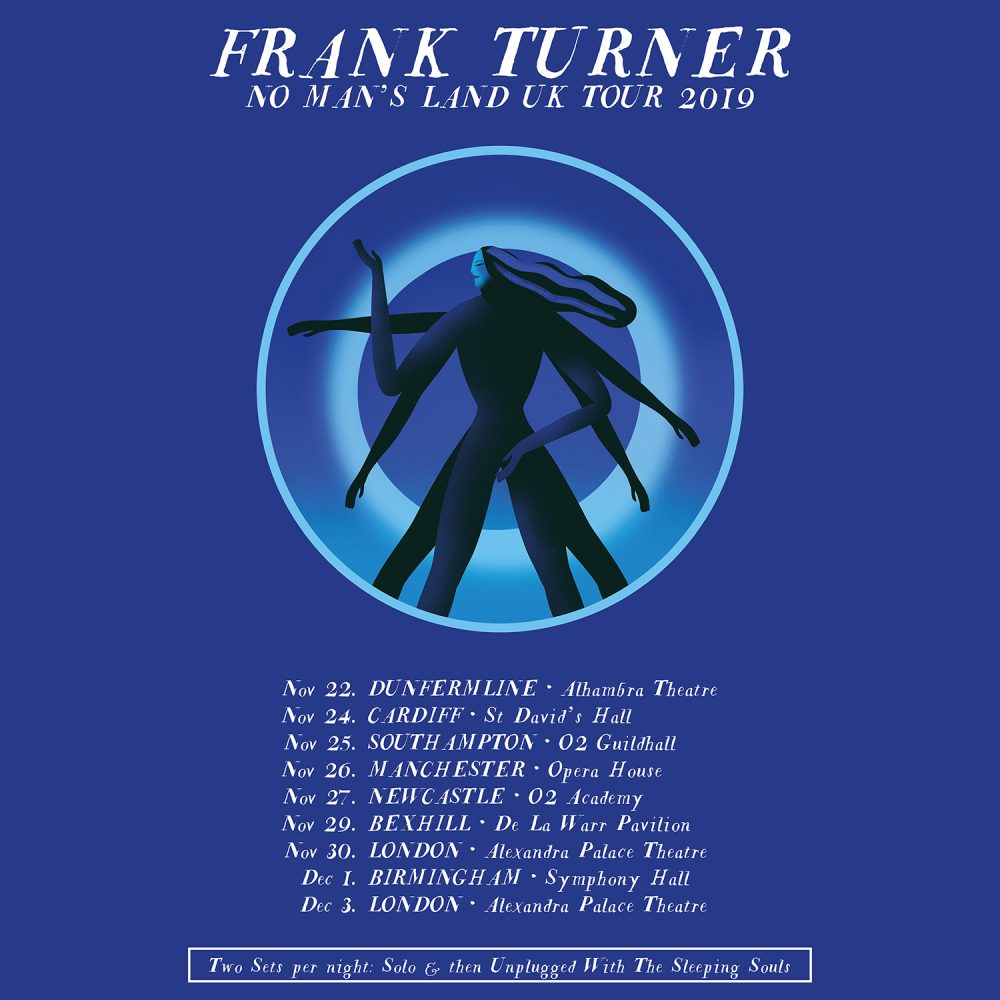 The tour dates will see Turner put a new twist on his formidable live set up, featuring a solo set followed by an unplugged band performance in seated venues. Speaking about the format, Frank says; “For this tour, I thought it would be good to give the new album some proper attention, so the first set of mine of the night will be a solo run through some of those songs and stories; once the Souls are up with me, we’re playing around with a slightly more stripped back, thoughtful folk approach to some of the older material, which feels different and powerful. Looking forward to sharing a slightly different show with everyone for this run.”

The women featured on ‘No Man’s Land’ come from across wide geographical and historical lines. They include Byzantine princess Kassiani (The Hymn of Kassiani), Egyptian feminist activist Huda Sha’arawi (The Lioness), and Resusci Anne (Rescue Annie) an apocryphal drowned virgin whose face was used as the model for the medical CPR mannequin across the world. There’s the serial killer from the Deep South who plucked her victims from lonely hearts pages (Nannie Doss), the jazz-obsessed heiress who fought for the Free French (Nica Rothschild) and a rowdy coach house landlady from 17th century Camden Town accused of witchcraft (Jinny Bingham).

“It’s bringing together my two main interests in life, which have always been separate from each other – history and songwriting,” explains Turner, who can be found seeking out long-forgotten historical sites on self-guided psychogeographical strolls when he’s not packing out arenas or headlining festivals.

The ‘Tales From No Man’s Land’ podcast is available from Apple Podcasts, Spotify, Acast and all other podcast platforms.

This Feeling Track of the Day: Voodoos ‘NRA’