Gigslutz vibes in the area. Gigslutz is going international, continental!

Over the last few days we have been able to bring you musical offerings from around the globe with festival reports from Croatia and gig happenings in Australia. We are not stopping at that either; keep those eyes peeled for regular updates from around the globe including reports on the Brooklyn scene and whats happening in South America.

In the first of our reports from Argentina,  Augustin D Argento, a journalist for TELAM, the Argentinian equivalent of the BBC interviews one of the brightest indie prospects in South America, Octavio Sendero.

Octavio Sendero, have recently released their debut record, ‘Como lograr despegar despegar de un único intento’ translated as “How to lift off in one try”. They take a range of influences including those from our shores to get unique genre crossing sound. Agustin caught up with guitarist Juan Delojo to find out more.

Why do you experiment with your composition?

The sound that you are looking for is a bit vintage, isn´t it?

Exactly. A bit vintage and a bit new. If we have the possibility, it´s impossible not to use the beautiful sounds of the legendary synths such us the Minimoog or the Mellotron. However, we can´t leave asicle the instrument of the new age and the XXI Century as they have a lot of power too.

How did you achieve this deep sound in your LP?

There were many things which contribute to that. One of them was that the synth´s sounds and the effects that we played are analogues, so they have a pure sound with an incredible amplitude. In addition, the keys were recorded in several channels with different synths. These tools and the keyboardist´s musical opinion generated a big loud wall. We were also lucky because we worked with Ernesto Romeo, one of the most could tell him: `Ernesto, I want the sound of an intergalactic nave crossing the stratosphere in the 1947 wintry solstice´ and before you finish talking he had it already finish. It was really great.

You are young musicians. How could you get on with your musical influences?

Each of us has several kinds of influences, so we have a lot of things in common and a lot differences. But Octavio Sendero is our first band, so as musicians we are growing up together and we appreciate the contribution of all the members. That is the key and the reason why we connect better as a band.

So, you have several models, don´t you?

Yes, they are so broad. Each of us brings one and the direction of the band attempts to go through a common way. I’ll tell you a funny event. Many people, who have listened to us, said that our music sounded like some bands which we had never listened before. And it was great because we looked for these imagined influences and we discovered good bands which were new to us.

The LP´s cover has many superimposed pictures, in a circular way and there is no band`s name on it. That is not very common. Why did you choose a cover like that?

We wanted to see the artwork completely done without words or letters, because each of the pictures is a concept in itself. That it the only reason. We respect the artwork because the people who created that are artists too. 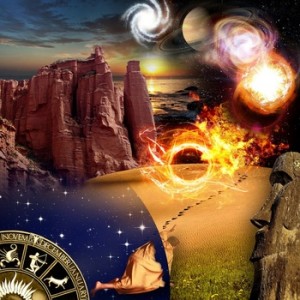 Taking into account the sounds and effects, how can you perform live?

We think of the concert in an integral way, that is to say, it is a sort of cross-disciplinary arts. We think that the music is only one way of the artistic expression, that is the reason why we prepare videos for each of the songs. We have made shows with photographic display and paintings. We played in varietes too.

So, would you say the music is an excuse to make art?

Totally. It is what we do and what join us. A friend of us compares Octavio Sendero with Franz Kafka. Kafka wrote about sensations. He didn`t say anything specific. That is what we try to do. We try to touch the audience with feelings and without specific phrases or compositions.