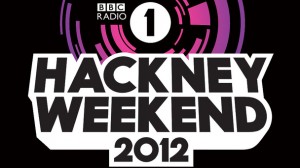 Thanks to those generous folk at the BBC, and due to being a resident of Hackney I was a shoe in for one of the 100,000 free tickets given away for the BBC Hackney Weekend. Top. So for the mere booking fee of £2.50 I was down to watch a stellar line up of some the biggest world wide artists.

A couple of days before the event we received an email suggesting we should get down to the event at about 10.30am as queues to get in were expected to last a couple of hours. Fuck that, I thought, and proceeded to drink in the house until all that palaver had subsided. Unfortuantly that meant missing Leona Lewis and Rizzle Kicks. Shame.

We eventually made the short journey down, and walked straight in without queuing, just in time to catch The Maccabees in the ‘In New Music We Trust Tent’. I was impressed with these live, more so than I ever have been on record. Although I was less impressed with the 2 pints that got knocked out my hand during ‘Pelican’. Decent start to the day though. The Vaccines followed, who in all honesty were a let down. I don’t mind their short snappy pop punk but it didn’t do it for me today.

Kasabian were next up on The Main Stage and were class, showing their worth as the best rock n roll band about. Their set drew on tracks from all their albums culminating in everyone going mental for Fire. Back in the ‘In New Music We Trust’ tent, Jack White rattled through a short, but quality set covering his new stuff, White Stripes (Hotel Yoba was mint) and Dead Weather ending on a rapturous Seven Nation Army. Listening to him go through his back catalogue, you realise that pretty much everything he has done has been class.

Headliner and international superstar Jay Z was to bring the day to a close. The show was good I suppose, although hip hop will never be able to pull of a show like a rock n roll band could. I’ve seen Jay Z live on telly before and he looked great with a full band, but here they were not in attendance and I was getting a bit bored with the ‘Let me see you bounceLondon’ and all that carry on.

MIA came on which was a pleasant suprise, until she started to sing that is. Or tried to anyway, as her mic was kaput and we heard nothing. Shame, I’m a big fan of MIA but not to worry. The set closed on Empire State of Mind, with a massive back drop of the stars and stripes, and it was hard not to sing along, although lets be fair, it’s a proper shit song.

Otis Reading played over the speakers whilst he went off before reappearing with Kanye West, whilst his wench Beyonce was spotted ‘hannging out’ back stage. These two done my head in to be honest. Walking around the stage giving it the whole “Londone, let em heaaaaarrrr yooouuuuu”. Enough was enough for me and I beat the crowds and made an early exit and made the short walk home, whilst those two middle aged hard lads carried on their entertainment.

Although the whole Jay Z thing was a slight a let down, for free I can hardly complain. All in all, a cracking day out was had by all. 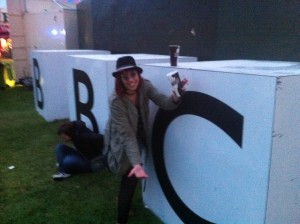