Ah yes dear reader, that’s what I thought I heard you whistle down the wind.  Having survived the ‘apocalyptic’ weather, we’ve been given the all clear to down multi-purpose weather wear and head back into the night in a slightly sexier attire (although I do imagine Glaswegian women stuck to disco shorts and 8inch platforms like the troopers they are, storm or nae storm!).  But, once strapped into our boogie shoes where do we go and who do we listen to?!  Don’t worry, I’ve got this friends…

For no other reason than the 3/4 times I’ve been it’s always been good.  The gorgeous national institution that is The Charlatans are a guaranteed top night.  Throw on some baggy jeans to go old school, do an interesting bleach job for a more modern feel, but go and dance like crazy in Liverpool’s  St Georges Hall on Friday 8th November.

Even better, if you do fancy going, Gigslutz are able to offer you tickets at a discounted £20 a pop! Click here to find out how 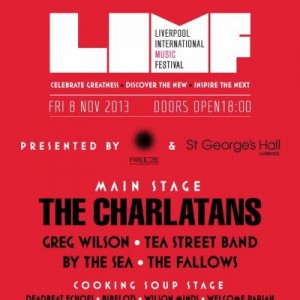 I missed The Others the first time round, I was but a teenager trying to get my hair like Julian Casblancas.  But they’re here now and they’re amazing!  My new fave human in music Dominic Masters and I had a wee interview chat the other day, so keep your eyes peeled for it on here.  In the meantime go see the boys in Sunderland or Glasgow this week for some legendary messy fun, after parties, and to check out the new material which he’s ‘really fucking happy about’.  Rightly so, it’s top! Wear something you don’t mind being hugged in.

The others play Pure in Sunderland this Friday, Glasgow’s Pivo Pivo on Saturday 9th November and Manchester’s Night & Day Café on 14th 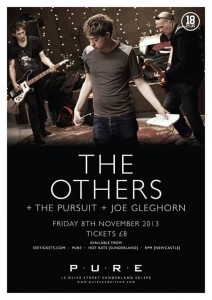 According to those well informed folk at The Guardian, M O N E Y can be described as ‘the Mancunian Manics’.  I don’t share this opinion, but I do think they’re bloody good.  Poetically discussing urban living and daily melancholy to a dreamy indie backdrop, they make rather beautiful music that switches between moving you to tears and dancing like you’re surfing a euphoric wave – beautiful stuff.  Grab your parka, your Morrissey disposition and beer with them in Brighton, Bristol and Liverpool this week.

A bit electro, a bit chilled, a bit of swagger, a bit good.  Bipolar Sunshine is the solo project of Adio Marchant formerly of Kid British.  It’s a very current sound, an updated Bloc Party perhaps.  The music is really rather delicious and resonates long after you hear it.  Quite deeply spiritual in places, aurally absorbing.  You lucky people in Edinburgh can pop on over one of my faves, The Electric Circus, on Wednesday (6th November) to say hi.  I’d advise a t-shirt that looks good under neon lights and a shot of Patron Cafe, for no other reason than it’s tasty!  And tell me how it went yeah!

This 15 year old from Doncaster completely does over the majority of singer/songwriters going today.  Lyrically so much smarter than you could fathom someone so young being, and can hold a damn good tune too, he’s apparently doing ‘Dylan better than Dylan’, which is nice.  Annnd it’s a lovely night out for those of you in Yorkshire to celebrate how now officially amazing it is to be from Yorkshire!  Further reading on the wee lad can be found here when we had a chat.  Now go on, place cloth cap on’t yer bounce and off you pop down ’t gig.