Since forming The Little Flames a decade ago, Miles Kane has gone on to work on a number of projects with various degrees of success. When they split three years later (with an album recorded but unreleased) he formed The Rascals, whose only album ‘Rascalize’ peaked at #100 in 2008, and swiftly left a year after that. Clearly happier as his own boss, Miles’ solo career has seen him releasing two critically acclaimed albums (2011’s ‘Colour Of The Trap’ and last year’s top ten ‘Don’t Forget Who You Are’ – working with Paul Weller, Skream and Dan The Automator among others) as well as performances at Glastonbury, work with Arctic Monkeys in various guises and – of course – the side project with best mate Alex Turner, The Last Shadow Puppets.

We caught up with Miles before his gig at Lincoln Engine Shed to talk about the possibility of a second Puppets’ album, Glastonbury last year and – hang on – was that a self confirmation for Glastonbury this year?

You played the John Peel tent at Glastonbury last year, and did ‘505’ later that night with Arctic Monkeys on The Pyramid. Do you feel that you have to alter your performance in any way when joining them onstage?

It’s different, y’know. Getting up and playing a tune with them – or being a guest with anyone – I don’t really see it as my gig. It’s their gig and you’re just sort of joining in. It’s just a buzz really, and obviously me and Alex are so close and we’ve done so much that it doesn’t really seem like a thing now. It’s pretty chilled out now. 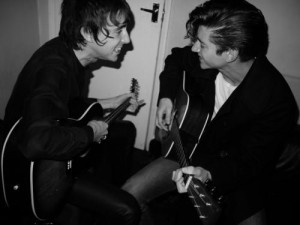 I’ve not seen The Last Shadow Puppets play… yet, but when Alex came on stage that was one of the highlights of the whole festival. You’ve done ‘Standing Next To Me’ a few times now…

Only ever with him, if he’s got up there with us. It is a good tune, I have been thinking about dropping it in our set.

Yeah, which is quite a recent thing. We just started doing that on this tour. It’s just one of those that we forgot about and then we put it on we was like, “That’s a boss tune!” and kind of wanted to do a new song for this tour. But with what I’m doing I don’t know what my next single is – it’s still early days and I didn’t want to do a new tune in case it doesn’t end up being on an album, y’know what it’s like with people’s phones… But with that one it’s already out there and it’s kind of something new anyway.

So you always like have something new to play on the setlist?

Always, really, yeah. Maybe it’s sort of your own indulgence though; you get excited by playing new tunes I guess as well, do you know what I mean? But a lot of these venues – on this tour especially – we haven’t played yet anyway. They haven’t even heard the old tunes which you’ve got to remember at the minute. I think we’ve got a good set at the minute, it’s fun.

The other new thing you’re doing is a cover of ‘Sympathy For The Devil’ with ‘Give Up’. Obviously you’re a big Stones fan, having covered ‘Doom & Gloom’, but you’ve also cited John Lennon as an influence on ‘Come Closer’ and other earlier tracks. If pushed could you choose Beatles or Stones?

Yeah, I think I’d always be Beatles to be fair. It’s tough isn’t it? I guess it’s just something in me but… Yeah, I’d always go Beatles. The Stones are great as well though. 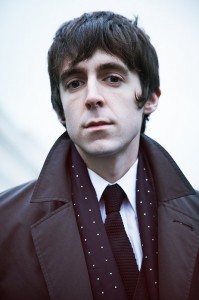 Going back to The Last Shadow Puppets, is it still something you hope to go back to in the future?

I think so, yeah, but you don’t know when though. It’s amazing how people still ask us about it – both of us always say that.

For me, taking into account your work and all of Alex’s work with Arctic Monkeys, it’s one of the top albums.

I know… that’s probably why we’re shitting it for the other one!

Now that you’ve both gone on to explore different styles of music with your own projects, do you think it would have a completely different sound?

I haven’t got a clue, y’know. I wouldn’t want it to move too far away cause that’s a cool sound, but it’d definitely have to have something else going in on it as well, something a bit newer. I don’t know, it’s just sort of cool as it is. We just have to write some songs and see really…

Have you started work on your next album?

I have, yeah. I’ve just been writing and demoing – there’s no sort of date set to record. Ideally it’d be nice to have an album done by the end of the year but we’re busy touring, we’ve got festivals and stuff. But to record before Christmas – if all the songs are there – would be good.

Any producers lined up?

No, still just gathering the tunes and then I’ll decide that.

You’ve worked with some legends on both albums; do you have a wish list?

One day I’d love to make a record with Jack White – he’s my hero. I think he’s great.

He joined you and Alex on stage at Glastonbury didn’t he?

Yeah but that was just a very brief thing. I’d love to meet him properly. I like his work ethic – he’s always churning it out. And Danger Mouse maybe, that’d be cool as well.

The terms “mod” and “glam rock” have come up a lot with your work but another term from that era that’s getting a lot of attention at the minute is “psychedelic”, with Temples and bands like that. Is that something you’d like to explore some more?

I do love all that psychedelic music for sure. I don’t like it when it gets too sort of flowery. I like Temples, I think they’re good.

We like to get a playlist from interviewees for our monthly radio show, is there anything you’re listening to at the minute that you’d like us to play?

I’ve been trying to get into new music; I like that Metronomy song ‘Love Letters’. It’s cool that, I really like them. I’m diggin’ that tune. I’d probably go for a Temples tune as well. I quite like that ‘Keep In The Dark’.

That does sound more like one of your songs than some of their others.

Yeah, it’s quite my vibe that tune. I don’t mind that Paloma Faith tune, dare I say. ‘I Can’t Rely On You’ that she did with Pharrell, have you heard that? It’s a bit more upbeat.

I don’t know if you can confirm anything yet but if you are playing Glastonbury this year would you like to move to The Other Stage, having been in the John Peel Tent twice?

Definitely. That’s hopefully the plan. I think with all the gigs we’ve been doing – and hopefully you’ll see tonight – they’ve been having it, and we’re maybe ready now to go to the bigger stage as well.

There’s definitely the crowd for it. I travelled a few metres forward in a few milliseconds when you walked on stage last year.

And that’s at fucking two in the afternoon!

You’ve been in bands before and you’re doing your own thing now, do you think you’d like to be in a band again one day or are you happy with how things are now?

I’m loving what I’m doing now, you don’t sort of have a barrier and you sort of do have a band, and I can work with anyone else. Maybe it’d be cool to do a little project if we did it as a band with some people or whatever, the way Jack White does with Dead Weather, something like that.

And obviously you’ve done that already with The Last Shadow Puppets.

Yeah, I guess if I was doing that I’d just want to do a Puppet thing.

Or an album by The Death Ramps would be ace.

Yeah… An album under The Death Ramps would be cool, wouldn’t it?