The atmosphere is warm and cordial as I sit opposite Jack Jones of Trampolene outside a cocktail bar near XOYO. Evidently an intelligent and focused individual, we have no trouble in drifting more or less immediately towards the more intimate questions of why and how Trampolene came to be.

“This is my wild abandon”, Jack says, eyes lighting up slightly. “I feel as though I can only live in words.” he goes on to say, citing a “cast-iron discipline” as the motivation that pushed him on to where he is today.

Jack goes on to explain his background and move to London being the point in which “these things kind of awoken in me”. Full of light and optimistic hope, whilst he’s clearly had a fair share of difficulties along the way, Jack portrays his journey as “a way of life”: “We’re not where we need to be,” he continues, “but we’re not where we used to be.”

Following a simple philosophy of hard work equals success, it’s hard not to be drawn in by the motivation and enthusiasm that he seems to almost purge. Reminiscing about being fourteen and wanting to be able to play like he does, and the ten years it took for that dream to manifest itself, Trampolene is by no means a half-arsed attempt: the move in itself was about the three band members showing “total commitment” to each other. Starting out with no TV and no internet, the last four years in which the band has established itself as something here to stay have relied on unfailing determination and, of course, talent. “And now here we are.” 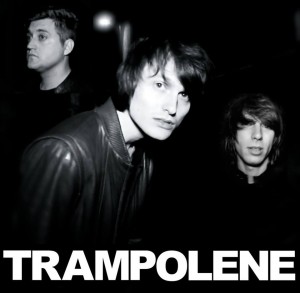 Speaking of which, what is Trampolene? What is the Trampolene sound? “Rock but dance in a way… as the prodigy is like dance playing rock music, we’re like rock playing dance music”. And now I see what they mean by that.

We move on to influences. Aside from the Prodigy, Jack references Oasis as an obvious influence. “It’s hard not to be influenced by Oasis, especially if you’re born in a shithole.” He recalls earlier times in school writing out Oasis lyrics over and over, and the “anger” from extra lessons which he found he could vent through a guitar.

Since, Jack’s taken up reading, and lists Julian Cope and Dylan Thomas as notable figures in his library. The poetry and personal similarities are particularly appealing to him, and whilst he explains that he once saw reading as a mature thing, overcoming early obstacles and echoing thought through words seems to be Jack’s newfound forte. “I used to think ‘I’ll never mature because mature things rot’”, but now seemingly content with the world of music, literature and art he’s found himself in, this are looking up for Jack and the success of Trampolene as a rich and interesting band.

Having recently put together their first of hopefully many ‘pocket albums’ – a compilation of art, music, lyrics, posters, videos and a personalised message from the band – ‘Alcohol Kiss’, and performed alongside Lois and the Love and Carl Barât and the Jackals on the 15th May, Trampolene are starting to reap the rewards of the effort they’ve put in. Although still adjusting to the novelty of aspects of band life, they are a clearly skilled and committed band well deserving of a listen: