Ahead of his DJ set at KHT, Ladbroke Grove on 20th April, Gigslutz’ James Reynolds catches up with the iconic Carl Barat

In the space of about 15 minutes, I had to summarise the life of Carl Barât into a handful of questions drafted as vague abbreviations ready for a last minute interview. Through this mad dash to absorb everything ever written about the ex-Dirty Pretty Things and Libertines frontman, it became apparent how much the artist really had progressed over the years. There was so much of it to read – so many opinions, so much said and done. Where to even start?

Thankfully, managing more than a nervous “ha, um, you’re, like, famous, right?”, starting at the deep end I begin with asking how he feels he’s developed as an artist. I’m met by a brief pause and then an articulate, considered response. Drawing a parallel between bands and marriages, Barât goes on to cite the Eminem song ‘Cleaning Out My Closet’, explaining the 2010 eponymous album to be something of a “clean slate” – references to the past coming from a difficult place, but with a ‘new leaf’ attitude shining through.

“The debut album for Dirty Pretty Things,” I continue, referencing the developments from the nihilistic vibe of The Libertines, “was upbeat – what can we expect from future projects?” Carl explains his recent audition with a band through social media – his first like this – and success in the preliminary stages of narrowing down potential, saying that he intends to continue that certain enthusiasm in his music in the future, along with the deep semantics heard previously. I move to the topic of his distinctive vocals, trying to ask if his particular sound limits him to set genres. From his response, I gather, there isn’t really a conformity to genre-types, per se, rather “it all comes naturally”. He draws parallels to the likes of Jim Morrison, who similarly had very distinctive vocals, but was never necessarily limited with where he took them. We digress

Conversation redirects focus to music in Britain during the early noughties – how the language in his music in particular was indeed directed towards sex, drugs and rock ’n’ roll, but also with deep, important messages about social deprivation and the like at the core to which he explains that he “writes about where he’s from”; a self-proclaimed “angry young man at heart” and “writer about escapes”, there’s a very personal human element coming through as we pick apart the course his life has taken. Staring from afar into the window of my English classroom, it’s reassuring to hear that poetic ability and an ardour to express first-hand experiences can still be valued to this day as important and influential factors in good songwriting. There’s no pretension or boastfulness about Barât, I notice as we speak – just a certain understanding of capabilities and the importance of music.

I’m relieved to hear that there will be a greater focus on lively music again. The energy of that ballsy, Jazz-inspired British fortitude that was thrown upon us in the early days is something that really helped to make Barât a household name. This is not to say that his 2010 album was lacking in anyway – it simply showed us a different side to Carl perhaps not characteristic of or appropriate for The Libertines or Dirty Pretty Things. However, with both an album and a gig on the horizon, the idea of a galvanising surge of defiance and enthusiasm is very reassuring indeed. His smallest played venue to date, Carl will be celebrating his “glass half-full” revival this Easter bank holiday with what promises to be a memorable DJ set at the KPH in Ladbroke Grove.

In almost direct antithesis to Reading Festival, this smaller, more intimate venue feels like just the right place to reimburse music with the soul and definition that it’s been waiting on for the last few years. Barât’s ‘ultimate indie disco’ is on Sunday 20th April and tickets can be purchased through SeeTickets 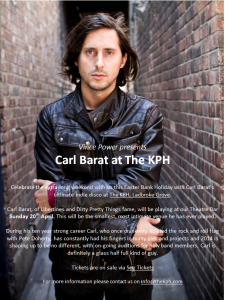 Hesitant to delve into the more clichéd questions, but falling victim to that fan-mentality, I quote him to NME in 2011 that there were “no current plans”, then again at the 2012 NME awards that there were “no plans to reunite” although a hint at possible future Libertines reunion. “Not really,” he responds honestly, “Not right now. Not without reformation”. The endless possibilities of the ‘but’ to follow excite me as the potential to do something in the future – “when I’m 50” – is uttered in spoken word. For now, however, it seems that he’s intent on focusing on other things, and fair enough. The philosophy has stayed the same, the tone has stayed the same – the important difference being the emphasis on turning things around and starting fresh.

“Songs you’d recommend at the moment?” I ask. Again, there is mention of The Doors, as well as Nick Cave and the Bad Seeds and Bonnie ‘Prince’ Billy. Whilst softer, thinking about it, the poetic, melancholy (in places) lyrics and vocals which lead the song and don’t just feature seem to be familiar from Barât’s own work – forgiveness, loneliness, self-destruction are all common themes, but often tied in with some redeeming feature. Could the ‘10s prove to be a second wind for the artist?

A father, author and hugely influencing figure in shaping British music post early-noughties, I feel myself genuinely impressed by Barât’s work and ‘character arc’. With a second album featuring Johnny Marr and Andy Burrows in the post and open interest in reverting back to more cheery guitar-based rock, I think it’s fair to say that with any luck we haven’t heard the last of Carl Barât.