The charming and vibrant atmosphere of East London perfectly matches with the bright and fascinating personality of Larry Tee. Behind his distinctive and funny glasses, his vivid and smart glance spreads enthusiasm and energy. Larry’s eyes are experienced eyes. They are incredibly alive and reveal an intense music story. Member of the Club Kids scene in New York in the late 1980s – early 1990s, Larry becomes suddenly an iconic DJ and producer. Then, it’s in the early 2000s, that he coins the term electroclash published on the Oxford Dictionary. Along the years Larry has developed his career by working as a producer, club promoter, an all-round artist and by discovering and launching many careers of performers such as Scissor Sisters, Peaches, RuPaul.

At the inspiring Book Club bar in Shoreditch, Larry seems to be totally at ease. Whilst talking about his new release ‘Super Electric Party Machine’ his passionate words flow quickly and restless. Like a catchy electronic and dance playlist you end up being captured by his theatrical and enchanting savoir-faire. It is in his basement in London that he set up his studio and worked on ‘Super Electric Party Machine’. 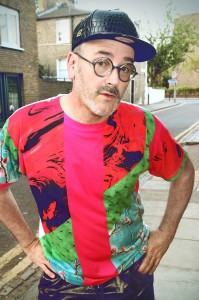 His new release is a collection of 11 different tracks with many interesting contributors: producers, singers, DJs, performers, models, designers who worked together to create something fresh and new. An energetic and positive music production; which aims to entertain people and at the same time strives to provoke, generate discussions and reactions. Electronic music told through sophisticated and unconventional personalities and artists. ‘Super Electric Party Machine’ is based on the need to smartly recycle what society is offering to us. It’s all about “what are the new rock stars?”

Time passes, generations’ needs change together with their expectations in terms of entertainment. Artists should then be able to read them, get inspired from them.

So who are the new rock Stars for Larry Tee? “Well, it’s all about the new generation rappers, television reality TV stars, designers, a politician – anything is more rock and roll than rock and roll these days!’ It’s our chance to redefine what we think is rock and roll.”

There is a song on your album called ‘Icons’, where there’s a list of important and influential names. Kurt Cobain, Craig Jones, Abby Warhol, Barack Obama, Lady Gaga. Why these names? What do you want to say with them? “Actually, it’s all the wrong names put together and it’s all wrong – it goes from Little Wayne to a politician and to me that’s what it’s all about really, that stretch of things that inspire you, things that move you, people that touch you.”

In ‘Super Electric Party Machine’, from ‘Sexy Sexy’, to ‘Body Talk’ and ‘Lagerfeld’ beats are overwhelming rap and catchy riffs are mixed with sexy and feminine voices. Do you think of making thousand of excited bodies shake, before creating a beat? How do you know that a beat will be smashing?

“It depends. Sometimes I’ll say: ‘ok, I want something that sounds really crazy’. Like in ‘We Go Crazy’, I just needed something that sounded like it was going in a thousand different directions. Something unpredictable and would just explode on you. Other times, like with the song – that’s probably going to be a big hit in the UK called ‘Body Talk’ –  because it has Versace model Portia Ferrari singing it, she’s fire, just trouble, and that trouble and that drama and that dangerous thing she has, translates into fire. You can feel the passion in her voice and say, ‘God, she’s sexy’. For that song, ‘Body Talk’, we said that would make a great dance song. It couldn’t have been made in the 90s when house music was happening, but it takes some fire from that and breaths some new generation heat on it with Portia.”

Many years have passed since you’ve coined the term Electroclash. What does it still mean to you? Do you think that your Electroclash music makes people think? “There was something about electroclash: electronic music and a clash of everything – politics, music, art, culture, fashion and women. I said, ok, here’s where I can make a difference in politics. Right here with something that people thought that it’s not great political and it’s just ‘shake your tits’, ‘Frank Sinatra is dead’ and bla bla bla. I have written some really powerful songs and I think what I do is much needed because that sense of humour is needed in the culture, as much as the serious stuff too. But yeah, I mean I like music that makes you think.”

Is there any particular track or production you think it might be your favourite one? “How could I choose? I love none of my children more than the others.”

Whilst telling about his story and productions, it’s like his body never stops moving and gesticulating. His frenetic and sharp tone of voice reveals his thirst for sharing the stories, which describe his career. Based in Shoreditch, Larry continuously gets inspired. In London Larry is able to create something new. He can take the best of such a stimulating and vibrant microcosm and stand out. His restless mind never stops generating ideas. Larry Tee is now working on TZUJI, his new fashion label. TZUJI is “like eye burning prints but in comfy cuts” perfect for those who eat too much over the holidays. “You can still squeeze your butt into the pants. It’s eye burning. So you go, ‘where did you get that stuff?’”

While listening to Larry, you end up asking yourself whether there’s an insatiable need to create, provoke or just make people talk. Larry’s passion for fashion shines also through ‘Super Electric Party Machine’. How did fashion change along the years? “Fashion has always been inescapably linked to rock and roll music. It’s just nobody ever said anything, and now it’s like the elephant in the room. If you dressed the right way then you might attract the right indie crowd that you want. It’s like how are you going to know that you’re the sexy bird that’s got big beautiful feathers on and the right kind of feathers? Sometimes the feathers are black and shiny and discreet and sometimes they’re big and beautiful. It’s all over my album – There’re names of designers being called out left and right and there’s fashion, there’s a super model incorporated on my album. That’s what it’s exciting.” 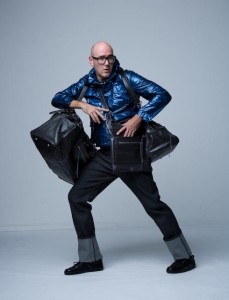 You bounce from a thing to another one and you seem to enjoy it. At the age of 54 you look like an intrepid teenager. Despite your jovial and over-the-top attitude you appear to have a forward-looking vision. How did you get there? “My art is more powerful when I touch more people, the people that I help get where they’re going. I’ve helped so many pop stars get where they need to go, and some of the most unique ones if you looked down my history, I’ve really, in a weird place, met so many people before they got there. I’m not saying it’s because of me that they got there but one of the things I can do is encourage others to live happy, and because I do that I have so much moments of euphoria that I really feel like I’ve won the lottery, even though some of my contemporaries have made tens of millions more than me, I wouldn’t change places with any of them.”

Creating music for Larry is not a cathartic process; it’s not about overcoming a tragedy or transforming deep personal sorrow. In his tracks, you never capture any kind of nostalgia. However, Larry likes nostalgic music. Many of his favourite artists write nostalgic stuff. Have you ever thought of creating something, which could tell sad aspects of your experiences?

“I really love music that’s melancholic but it really slows down my life, I’m so raw. I find my emotions really wide open and if I really embrace the sadness I go too deep. I can spend a lot of time on the sad things. Maybe as I get older I’ll embrace that part of my musical aesthetics but to me I go too deep and too sad. I can’t escape and I can’t be productive. I also don’t think I’ll probably ever totally embrace it because I think there’s plenty of people that really embrace it and do it so beautifully.”

Larry speaks slower now. His voice is calm and lower. Behind his warm smile you can read the truth in his words. There’s something magnetic in his presence. It’s a mixture of a theatrical performance and a genuine approach to life. There are some artists, like Larry Tee who are difficult to portray. It’s like placing them in a static position and then asking them to not move because you need to picture them. You want to capture the perfect snapshot able to contain everything. But the truth is, that you won’t be able to catch every single detail. You will keep asking yourself whether there’s still a funny episode to be told, a crazy story to laugh about, a new track playing in his DJ head.

View all posts by Letizia Ghisletta →