With platinum and gold selling records to their name The Pigeon Detectives have been in the premier league of bands over the last decade. After the initial furore of the mid 2000’s when everything en vogue meant heaving a guitar, skinny jeans, and punchy pop songs the Pigeon Detectives have stuck to their guns. Many of the also rans of those halcyon days have since disappeared but The Pigeon Detectives still remain. They are about to release album number 4 and hit the road to play their new record ‘We Met at Sea’. Steve Gigslutz caught up with Ryan Wilson to get the low down on what to expect and why they are the Paul Gascoigne of rock n roll…

GS: Hello Ryan. How are you and the lads getting on?

RW: Hi Mate. All good thanks. We have just finished our final rehearsals before the tour. We’ve just left the crew testing our equipment so that’s all sound and it’s just a case of waiting to get going now. The first date is this Thursday at 53 degrees in Preston which we’ve played before and is a cool venue.

GS: So you have a new album out next week – can you give us the low down on this. Are we seeing the tried and tested PD formula or have you taken a new direction and going to surprise us with some Avant Garde jazz?

RW: Ha! None of that I’m afraid. You know, we are what we are and we wear our influences on our sleeves. We’re never going to make a dubstep album just because it’s in the charts. We make music what we would want to listen to.

Saying that though we are naturally getting better as musicians as we get older. We hear stuff which we might not have picked up years ago and we can then try and put it together in the studio. Different things sound good the older you get.

We’ve basically just made an album which will sound as good live as it will when you bang it in the CD player. It’s got catchy choruses and raw energy. Although it may sound predictable and clichéd, this is my favourite out of all four of our albums.

GS: And the title, (We Met at Sea) where did that come from?

RW: I’m afraid that’s not too exciting. It’s a lyric from the song ‘I Don’t Mind’ from our new album. We’ve always thought it better to give the album a proper name rather than just calling it ‘Pigeon Detectives’ or something. ‘We Met at Sea’ is a pretty cool lyric and you can translate it to whatever you want.

GS: I like the idea of fans being able to get their name on the artwork of the new album. Can you tell us a bit more about that?

RW: Yeah it was an idea us and the record label came up with. Everyone who pre-ordered the album got to get their name put in the record sleeve. It’s a more of a thank you list as much as anything as without the fans buying the record there would be no band. It’s just something a bit different and it seems to have gone well.

GS: You are also doing a song for the FA I am lead to believe. Can you tell us more about that?

RW: Yeah we were approached by The FA to get involved in a campaign to have your song the ‘FA Anthem’ for this year’s FA cup. We are big footie fans so we jumped at the chance. We chose ‘Animal’ which is our latest single and has had a good response. We are up against Reverend & The Makers, Devlin, Lethal Bizzle and The Enemy and some of those have some pretty big followings so I doubt we will win but you never know. The winner gets to perform at Wembley at half time during the final so we want it! 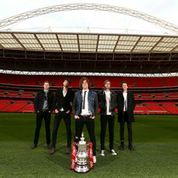 RW: We’re looking forward to the tour as a whole really. There are no specific places that stand out, everywhere is good. It’s good going to the more scenic towns, then it’s also good getting to go to the likes of Glasgow which, shall we say, is less scenic but always has brilliant crowds.

It’s been a while since we have been out on the road so we can’t wait. The ticket sales have went really well, most places have sold out or are near to selling out so it’s going to be good. After the UK tour we’re heading to Holland, Belgium and Germany so it’s all nice and busy.

GS: Here at Gigslutz we’ve fell into a trend of asking touring bands what their tour bus is like. The last few bands have all remarked about how tidy theirs are on talk about early nights etc. Can you break this trend and let us know that your tour bus is a haven for groupies, drugs and no sleep, or have you now matured into a more gentrified method of travelling?

RW: It’s always a dump for a start! We’re all working class lads and we like a good drink after we’ve done our show. We will take whatever gin and beer we have left from the rider, stick it on the bus and have a good tear up between us. Some of us are married and the others have girlfriends so we don’t have groupies any longer…

GS: At least that’s better than the majority of bands we seem to speak to who seem to have a coco and do a Sudoku puzzle after gigs!

GS: With your scruffy piss head days in mind, can you tell us of a funny story from your touring days of old?

RW: One of our worst, or best was probably Glastonbury. We were playing the second stage and were going on second from top. Big fucking gig. Probably the biggest mistake our management made with us was letting us go down to Glastonbury two days early. As you may know Glastonbury is like a town full of villages and there is stuff going on everywhere. So we find ourselves by some hippy bonfire having a weird party at 9 in the morning in some random field. Our tour bus is on site so we fuck off the hotels the management had arranged for us to stay in and just get smashed before going to try to get some kip on the bus. The next thing we know is we are getting, literally, dragged off the bus by our manager. We had to go on stage in 20 minutes. In front of 50,000 people man! And we were somewhere between off our heads and having the worst sickening hangover ever. I tell you what though it was one of our best performances ever!

I watched an interview with Gazza a little while ago and he talked about waking up covered in gin bottles and empty cans. He asked his mate “how did we get on yesterday”, to which his mate replied “you played, you won, and you were man of the match”. That was like us, the Gazza’s of Galsto.

GS: The NME once claimed that you have “played at every festival known to man”. I’m not sure if that was a slate or not, but good on ya, I say. What is your best festival memory?

RW: As mentioned Glastonbury was pretty special but 2011 at Leeds was probably my favourite. We are local lads and we had been going to the festival for years as punters. Since the PD’s started we had played all the stages from the smallest and we were now able to play the main stage. It was early in the day but there were still loads of people there and we pulled it off. What made it even more special was sharing the stage with The Strokes and Pulp who were jointly headlining and both massive favourites of mine and to be able to grace the stage with them was special.

GS: Will you be playing many this year?

RW: We will be doing a couple of big ones but we can’t say yet as the festivals normally want to announce them themselves. We will do some of the smaller independent ones too and a big massive one in Russia!

GS: We have a radio show which goes out on Optical Radio in London the last Thursday night of the month. We ask our interviewed bands to pick any 3 of their favourite songs to play. Shoot….
RW: Ok. I’ll pick our song ‘I Welcome Back’ which is off the new album. I’ll also go for ‘Last Night’ by The Strokes which basically made me want to be in a band. And thirdly, to tie in with the festival experiences I’ll go for ‘Common People’ by Pulp.

GS: That also ties in with The View judging by your description

RW: That as well!

Tune into optical radio London to hear the Gigslutz radio show the last Thursday of every month 7-9pm. As mentioned above this month you will hear Ryan’s choices. You can listen on line here http://www.opticalradio.net/

The new Pigeon Detectives album ‘We Met at Sea’ is out April 29th. You can catch them on tour throughout April & May if you can get hold of a ticket. Dates are on their official website at www.thepigeondetectives.com