Chris Karloff’s new project, Black Onassis, sees the former Kasabian member join forces with NYC musician, Nick Forde. Their new single, ‘Brain’, precedes the release of the debut album, ‘Desensitized’, and features the vocals of Cooper Temple Clauses’ Ben Gautrey. And Gautrey is not the only guest appearance on the album; in fact, Karloff pays host to a range of special appearances, including Liela Moss of The Duke Spirit, Morgan Kibby of M83 and Steven Young of The Black Marquee.

Whilst reminiscent of the pumping, electro-indie of Kasabian, Karloff’s latest creation signals a change in pace – with a more chilled out, melodic structure, ‘Brain’ is an electronic symphony; a concoction of traditional Brit-Pop and experimental, hypnotic trance. “Electronic music to me is surprisingly soulful, there is a warmth that comes from the simplicity of sounds” – this sentiment, expressed by Karloff, is proved by how surprisingly emotive and expressive this first taster of his new album is: whilst retaining traces of ‘80s electro-pop such as Kraftwerk or Tangerine Dream, ‘Brain’ is indeed “warm” and “soulful” – a stirring song that builds up compellingly, leaving you wanting more.

“Desensitized’ is out 23rd September, on the band’s own label Minus Man Records.

Having released her debut album back in 2007, Knapp soon established herself as a distinctive and compelling member of the British folk scene, winning two highly esteemed BBC Radio 2 folk awards in 2008.

Between then and now, Lisa has been increasingly inspired by the natural elements of the universe and our fragile, ever changing, environment, as well as a love of language. These influences are evident in ‘Hidden Seam’, a song about the month of May. Radiating ethereal beauty, the song progresses from the traditional to the experimental, and showcases Knapp’s affecting and emotive vocals, reminiscent of the likes of Annie Briggs, or even – more surprisingly – fellow advocate of the unique, Bjork. Alongside pretty folky melodies sit visceral undertones and unusual sampled codas evocative of Eastern chants – thus resulting in an intriguing musical tapestry, filled with an intensity that traditional folk would normally shy away from.

The album, ‘Hidden Seams’, is out on the 16th September on the folk scene’s favourite label, Navigator. 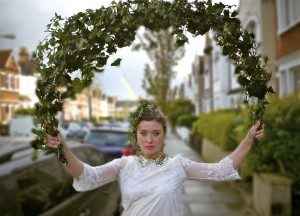 California trio, The Cosmonauts, have arrived in Europe to grace us with their raw energy and kaleidoscopic Psych-Rock. Following a couple of packed out London shows, and the release of their new album, ‘Persona Non Grata’, the band have now unveiled the video for new song ‘What We Worry’. The video portrays The Cosmonauts’ lifestyle of touring and partying hard, alongside the lyrics “I’m not tired, I’m not weary, I don’t need no sleep at all” (though, as we see the drummer slump into his kit and drop his sticks on the floor towards the end of the video, I may contest this… )

‘What We Worry’ is a reverb-filled slice of Shoegaze, with traces of trippy Brit-Pop and chaotic West Coast garage rock. An amalgamation of psychedelic drones combined with the more traditional sound of guitars, and a steady beat, the new song from these California boys is an animated anthem filled with vigour and character. Whether or not you’re a fan of the frenzy that seems to follow in the wake of The Cosmonauts, ‘What We Worry’ is an entertaining, feel-good song, showcasing just how much three lads can enjoy the rock ‘n’ roll lifestyle.

Welsh crooner, Cate Le Bon, has teamed up with Mike Hadreas (aka Perfume Genius) and created a raw and heart-rending ballad, ‘I Think I Knew’ which, Le Bon has revealed, dwells on one’s “importance of place and purpose”. Although typically delicate with a fragile beauty, ‘I Think I Knew’ is meticulously orchestrated to dramatic effect and filled with scintillating, cascading melodies.

With perfectly pretty harmonies, poetic interludes, and emotive refrains, the duet between Hadreas and Le Bon appears flawless and inspired, and will sweep you off your feet if it catches you unawares. Conversely, the single artwork may not be to everyone’s taste… 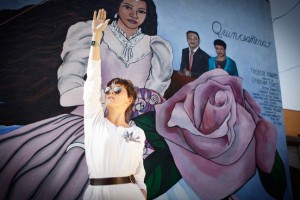 I heard Miraculous Mule for the first time on the radio this week and fell immediately head over heels for the blues-rock that was blaring out from the speakers. Their current song, ‘Satisfied’ is an exciting, pulsating blast from the past with shades of old fashioned RnB as well as African-American gospel and traditional rock and roll.

Despite the inherently American sound of Miraculous Mule, with their foot-stomping blues and pained yowls, these musical mustangs are in fact from London town. Regardless of their origin, however, the walloping bass line and propelled beat of their new song would most certainly keep even the most patriotic of people ‘Satisfied’.

Miraculous Mule’s debut album, ‘Deep Fried’ is released on 23rd September and my guess is that it’ll be finger-clicking good.

Gigslutz interview with: THE JAR FAMILY