“I wanna send these photos to my mum. She’s forgotten what I look like!” jokes Glasvegas frontman James Allan as he joins fans and smiles for a few photos on Cowper Street pre-gig. We certainly expected an intimate performance tonight, what with Shoreditch venue XOYO being just about big enough to swing a microphone in, but a close encounter of the rock kind was a huge bonus. It proved that a) he’s not the miserable Scotsman his lyrics portray him to be and b) you can never undervalue the importance of going that extra mile with your fan base. 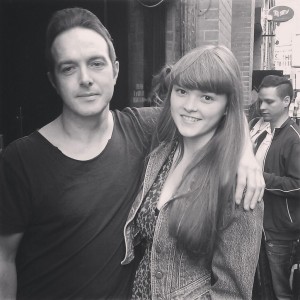 Support from Wales-based young blood Catfish and The Bottlemen is welcomed by a crowd usually reluctant to leave the bar for anything but the headline act. They pack their set with enough energy to ensure that they can’t be ignored. Guitarist and lead singer Van McCann’s hair falls across his face (think Alex Turner circa ‘Humbug’ or even Hansen if they’d hung out with a heavier crowd) as they play ‘Homesick’ released just days before on June 17th. At only 2 minutes 27, it’s not a track of Glasvegas length but it doesn’t have to be. It’s short but monstrous and explosive. Van is no stranger to throwing himself around the stage having playing over 100 shows last year. As he mounts the drum kit, foot resting on the ride cymbal and leaves his guitar pendulously hanging from XOYO’s ceiling, you can’t help but think ‘this isn’t the last I’ll hear from them…’ 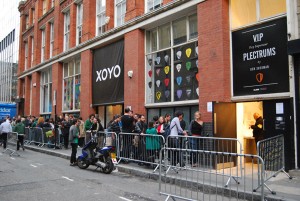 We haven’t heard a great deal from Glasvegas of late. Tours around China, the European festival circuit and a UK showcase tour of new tracks filled up 2012. This year we’ve been largely waiting for ‘Later…When The TV Turns To Static’ which is due for release in September although we’ve had the in-between video release of new single ‘I’d Rather Be Dead (Than Be With You)’. Such elusiveness makes tonight’s gig quite exciting.

The band enters to a roar of fans and bright white strobes that travel across jet-black outfits (would you want to see them in anything else?) Atmospheric guitar parts open ‘Flowers and Football Tops’, a song that incorporates the nursery rhymes that pepper their work. Tonight, the rendition of ‘You Are My Sunshine’ that concludes the song is even slower and more beautifully haunting than usual, like a Grimm’s fairytale put to music.

After ‘Young Blood’, a song that showcases that spine-tingling signature voice-break of James comes ‘It’s My Own Cheating Heart That Makes Me Cry’. “Liar liar liar liar pants on fire / Lies alibis lies more alibis / From the truth, I admit I’m more than shy / Ain’t it the times we are living in? / Everybody’s doing it so why can’t I?” belts the crowd to a still James who stands with both arms rested behind his head and guitar suspended from his body in a haze of appreciation and disbelief.

The military drumming of Jonna Löfgren then opens ‘If’. You can’t help but take notice of Jonna whose fringe perches on a pair of dark sunglasses as she stands (yes, stands) at her drums, singular feather earring swinging with the beat of her thrashing arms. They really know how to construct a pre-chorus, a skill that defines their music along with the story-telling quality of their lyrics. It’s displayed so completely in ‘Euphoria, Take My Hand’. Drums intensify in volume and pace to an explosive climax that’s so full of concentrated feeling, it near enough breaks your heart. Her keyboard part in ‘I’d Rather Be Dead (Than Be With You)’ proves she’s certainly capable of being a lot less heavy handed. This is the first single from their forthcoming album and if it’s anything to go by, we can expect a healthy measure of emotive lyrics. James also experiment s with the track by swapping vocals for speaking parts half way through; “Everybody’s carrying something with them/sometimes it’s good just to let it go” says a pensive James in rich Scottish tones.

Glasvegas perform a swift 180 from pained piano parts to the loud, lustful chords of ‘Geraldine’, the 2008 single born out of social worker Geraldine who gave up her job to follow the band and sell their merchandise. It sends a crowd into absolute overdrive. “I’ll be at your side to console when you’re standing on the window ledge” sings James to the gentle ‘ooh’s of guitarist Rab Allan and bassist Paul Donoghue. The original tarnished stone walls that stand behind them act as a fitting backdrop for the gritty lyrics of ‘Geraldine’, a true highlight of tonight.

They leave the stage after an electrifying performance of ‘Go Square Go’ received by a sea of arms and Coronas but an encore is inevitable, especially after they’ve gone without playing ‘Daddy’s Gone’. Sure enough, they return for four songs starting with acoustic B-side ‘All I Want Is My Baby’, a track that might be quiet in guitar parts but it’s loud and full vocally. James’ howls, however, are drowned out by the disheartening sound of a chattering crowd. Disappointment can be ascertained from his face as he slows the song down. It’s a shame. Glasvegas’ sound isn’t to everyone’s inclination but whether you’re an avid fan, you’ve been dragged by your dad or by your girlfriend (who’s come to check out James’ arms in a sleeves top), you keep it quiet. Nevertheless, they pull it back with the gradual build up of ‘Lots Sometimes’ and, of course, ‘Daddy’s Gone’. Not ones to shy away from accessing and channelling the deep and dark emotions that indie is usually too afraid to, ‘Daddy’s Gone’ strike a chord that’s almost indescribable with lyrics like “How you are my hero/How you’re never here though/Right now I’m too young to know/How in the future it will affect me when you go/Forget your dad, he’s gone”. The first I ever heard about Glasvegas was an NME review from 2008 that reported on hoards of grown men crying to this song and it’s something that really stayed with me. Tonight, there seems to be dry eyes all round but there’s absolutely no doubt that this is a desperately yet powerfully sad anthem. You just don’t know underrated until you see Glasvegas live.