Say hello again to these black angels of sombre melancholy, defying rhythmic tempos and mathematical sonic precision. Just less than three months ago, Interpol triumphantly left the iconic art-deco walls of Brixton Academy splattered with their sound. Last Wednesday, the New York rockers successfully turned on the bright lights again with a victorious comeback to London´s Electric Ballroom. The dose: An intimate warm up show with a classic-driven set prior to their massive gig in Glastonbury.

“You are a past sinner, the last winner…”

Do Interpol despise their third and fourth album? The current fan-dreamlike setlist that includes just one song from their 2007-2010 era proves that, beyond the obvious inclusions from the upcoming album, their nostalgia and pride goes back to Turn On The Bright Lights (2002) and Antics (2004), their seminal and essential albums where Interpol used to be one of the best bands in the planet. Certainly, the crowd acclaimed the incorporation of such a classic driven set, when their last two efforts were nothing but a hard to swallow disappointment in comparison to Interpol’s majestic career from ’97 to ’04. 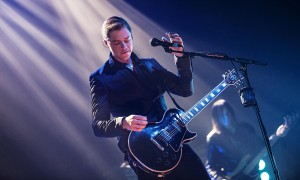 If Paul Banks’ somber vocal tones and Daniel Kessler’s hypnotic riffs are the heart of the band, let me tell you that the soul resides in Interpol’s rhythmic section – probably one of the most savage, effective and underrated in pop music. Sam Fogarino’s – looking like an Italian-American mafioso – precision and rigor in drums is what brings out the pace that explodes into their well known sea of introspective and funeral hysteria. And what about Brandon Curtis’ bashful keyboards that blend perfectly with Brad Truax’s mournful bass lines? Just essential.

Interpol came to the stage in their traditional funeral-like style: grim and tight black clothes hidden in waves of incessant strobes and red lights and ready to bring their eternal sonic obsession of “playing only the logical harm.” From the introspective guitars and atmospheric textures of classics like ‘Hands Away’, ‘NYC’ or ‘Leif Erikson’ to the moments of punk-like riffing hysteria (‘Say Hello To The Angels’ and ‘PDA’) and the promising new songs that undress Kessler’s obsession with monotonous chords (‘My Desire’) to their coquetry with classic rock ‘n’ roll that hides between a sea of gloomy vocal tones (‘All The Rage Back Home’).

But Interpols crème de la crème comes with ‘Not Even Jail’, which certainly doesn’t have the same popularity of their timeless Antics trilogy of riff-driven classics (‘Slow Hands’, ‘C´Mere’, or ‘Evil’) but that, along with ‘NARC’, correspond to Interpol’s peak of intelligence, eloquence and creativity and where they truly give the “meaning to the means.” A brutal bass line and Paul Banks “subtracting pain by ounces”, while the rest of the band explodes in a truly memorable moment of thoughtful music.

Before Interpol packed their gear for Worthy Farm, they successfully left the Electric Ballroom with an encore including ‘Lights’, a superb version of ‘Stella Was A Diver And She Was Always Down’ and their seminal classic of whipped love, ‘Obstacle 1’. That’s it – they conquered London once again. Sleep tight, dream tight, Interpol are back in shape and they sound better than they have in years. Do we really missed Carlos Dengler? Certainly not last Wednesday, but we still need to wait to reveal the secrets behind El Pintor – Interpol’s Spanish anagram – their fifth studio album and the first without Dengler’s haunting bass lines.

There have been missteps and disappointments, but Interpol are one of the most important bands in the last 15 years and live, they’re an ace.

Founder & Editor @ TSOD (thesenseofdoubt.com) and obsessed with the possibilities of recorded noise as a tool to squeeze your skull. Wish we were in 1977...

Founder & Editor @ TSOD (thesenseofdoubt.com) and obsessed with the possibilities of recorded noise as a tool to squeeze your skull. Wish we were in 1977...
View all posts by Alejandro De Luna →