Nottingham band Amber Run consist of Joe Keogh, Will Jones, Felix Archer, Tom Sperring and Henry Wyeth. Since forming at university a few years ago, Amber Run have played festivals ranging from the likes of Reading, Kendal Calling and Dot-To-Dot, and are currently embarking on a full-scale headline tour of the U.K – we caught up front man Joe during the first week of their tour to find out more about the highly tipped 5 piece…

Hi Joe, how are you and what have you been up to this week?

Yeah I’m alright, tired and hung-over, we’ve been out on the road so, like that everyday really.

You began your tour this week, how has it been so far?

It’s been wicked, all the shows have all been sold out, tonight’s the only one that isn’t and we’re only a few tickets off that as well so it feels amazing. It feels absolutely nuts, obviously there’s the glamour of rock and roll and it’s all about live shows – it feels really nice to see a packed out room, it feels great.

Brilliant. What can those you haven’t seen you live before expect from your live act?

Passion. For us playing live is one of our favourite things in the world and there’s nothing else I’d rather be doing. All of these songs we’ve written, every single one, there isn’t any team of writes behind us. This is the shit that’s happened to us and this is the shit that we’re feeling and we get to sing it, and now we get to sing it to people who know all the songs and sing them all back, so you’ll just see us having a wicked time and playing music that we really love. 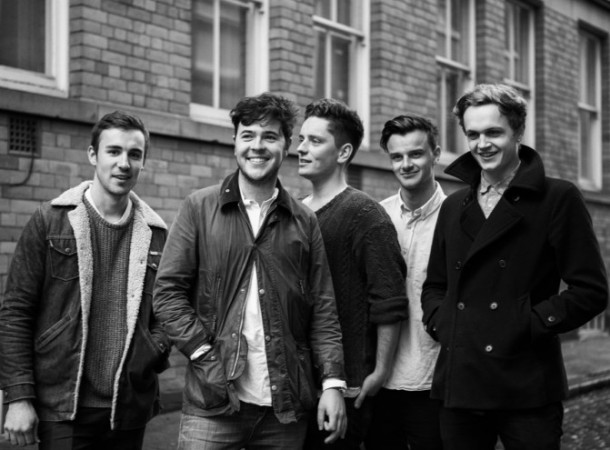 You’ve got a couple of EPs out now as well as a single, how’ve you found the initial reaction to those?

Yeah they’ve been great, obviously some have been better than others but the response has been great, like you said we’re playing sold-out shows and we’re selling a lot of EPs so yeah the reaction has been really, really good. We’ll just have to wait and see how the album goes.

When can we expect the album?

We are literally just polishing all of the ‘nitty-gritty’ off with the label at the moment, I mean we’ve had it recorded since last January, so it has taken a while but it should be out by at least the middle of this year, I hope.

Who would you say influences you as a band?

Every single one of us will say something different, like Will is a big house-head, which you wouldn’t have thought, and like our drummer is into intense Shoegaze. But I usually tend to write most of the songs and I love like more of the classical song-writing stuff like the Coldplay, Billy Joel and Jeff Buckley sort of stuff, so yeah I’m more of a kind of ‘chinky-chonky’ piano sort of bloke myself.

You supported Kodaline in the early parts of last year, what can you tell us about that?

It feels like years and years ago now, that was only last March. But yeah it was good, it was like our first proper tour, obviously we had done one tour before that but they were all tiny venues so to go from that to the Brixton academies of this world was ridiculous. If I’m honest I don’t think we were ready for it, but it was a great experience and I’m really grateful to the boys for letting us come out with them, they’re a great bunch of guys and it was a lot of fun. Like we want to play Brixton academy as our own band without supporting anyone so I feel like when that opportunity does come around we will be ready for it.

What would you say has been the most pivotal moment of your career so far?

Hmm, I’m not sure y’know. I wouldn’t say I’d use the word pivotal to describe anything yet, the vision of the band has always been to play big rooms and write honest songs and when we get off as a band see people get off with us. But pivotal I’m not sure, there’s never really been any moment where we as a band have gone “Holy shit, this is nuts”. I’d probably say recording the album, like the entire process of sitting in that studio for months and we’d never had the backing of talented and influential people before, so if I had to I’d say that was the pivotal moment for us so far.

Are there any current bands that you’re enjoying at the minute?

I like that Aquilo band that are just coming out, their tune ‘I Gave It All’ is beautiful. But I really admire what Catfish (and the Bottlemen) are doing at the minute y’know, I think they’ve got it right. I spent years and years taking everything so seriously and every single time someone said something negative about the music we make I’d take it so to heart, but I’ve realised I’m not on a 9 to 5, and I may be hung-over stuck between somewhere and Norwich but I’m having a good time doing it – I feel like sometimes bands forget to do that and everyone’s so serious, maybe it’s time everyone cheered the fuck up and enjoyed what they were doing, or if they’re not do something else.

If you weren’t a member of Amber Run, what would you be doing right now?

Crack! Haha. No, I don’t know if I’m honest, say if I wasn’t in the band I’d be making music some other way, I just love it. I have no idea what I’d be doing, I just love what I’m doing now, but inevitably crack would be involved. I’m kidding of course…

Crack is whack! Speaking of guilty pleasures, who would you say is yours?

I fucking love Taylor Swift, I think she’s rad. But if we weren’t talking about music I could talk about my foot fetish… I’m kidding, I’m kidding.

What can we expect from Amber Run throughout 2015?

I think that’s really up to the people that listen to our music. We’ll go as far as people will let us go, and we’ll do as much as people will let us do. We love making music, and we’ll continue doing that on and on and on, and we’ll continue to make music, and I’ll sing it loud enough so people can hear it. I’d love to go out to America and do Europe as well, but first and foremost we just want to get the album out so people can hear it.