Following the release of their stunning debut album Lacuna, Childhood played an intimate gig in famed East-London record shop Rough Trade. After a mind-blowing set and surrounded by a crowd still buzzing from riff-heavy ‘Solemn Skies’, which brought the set to a close, Corrine caught up with the band to ask a few questions about what influenced the album. 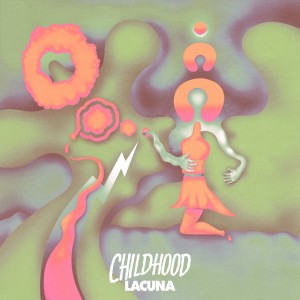 Congratulation on Lacuna, it’s one of my favourite albums this year!
Jonny: Thanks!

What were your main influences when making the album?
J: All sorts of music like Bjork, Deerhunter, soul music, German block music.

What sort of music did you grow up listening to? How do you think that influence the album?
Dan: Growing up I listened to a lot of soul and jazz; for example James Jamerson. I think me and Jonny put that towards the rhythm section, like a modern take on Motown.

There’s an assumption that you’re a South London band, and you are often compared to fellow South London heavy rockers Palma Violets. Would you say South London influenced the album in any way?
J: We’re not all from South London! That’s usually said because Ben is from there. I’m from up north. We’re linked to Palma Violets just because we’re friends.

D: There are great artists from South London though like King Krule and Gengahr.

You’re really confident on stage. How do you work towards achieving that level of professionalism on stage, is it pre-rehearsed or is it improvised when the music starts? Any tips on stage presence for new bands?
Ben: I don’t really plan at all. The only thing we do is walk around in a circle, nervous.

Are there any new bands that you love listening to and would recommend?
B: A new band I really like at the moment are Schultz and Forever, they’re from Northern Europe (Copenhagen, Denmark), they’ve got a Tame Impala vibe about them.

Hi, i'm Corrine. I'm 16 and from London. My hobbies include blogging (chaoticcorrine.blogspot.com), spending all my money on vinyl and clothes, gig-going and avidly procrastinating. I would love to be a journalist, but my main wish is for The Smiths and Oasis to reform.

Hi, i'm Corrine. I'm 16 and from London. My hobbies include blogging (chaoticcorrine.blogspot.com), spending all my money on vinyl and clothes, gig-going and avidly procrastinating. I would love to be a journalist, but my main wish is for The Smiths and Oasis to reform.
View all posts by Corrine Corrodus →