Pirate Studios have been dubbed the future of studios, and with the backing of the likes of Dave McCabe, Carl Barat and This Feeling, that seems extremely likely. Having spent his life around music, and specifically in and out of bands, founder of the studios David Borrie has essential experience that makes the studio stand out. “I was living in Bristol and we kind of realised the sheer amount of money that we were paying just for rehearsal studios every week so we thought it would end up being cheaper just to get our own studio,” Borrie said, as he recalls how the studios concept first began to take shape. “So it just gave us this concept that bands could let themselves in and let themselves out, that bands could be trusted.”

Pirate Studios now have 90 studios across the UK, the company have seen themselves develop at an insane pace, particularly over the past 13 months or so. “Sometimes it’s actually best not to think about it, it’s a bit much to comprehend really,” Borrie says with a humble sense of proudness, and rightly so. “I love the studio spaces we’ve been creating, it’s priced well and bands are really enjoying it and I really think we’re doing something to help the UK music scene at the moment.”

David and co are celebrating in immense style with a number of eye-catching gigs across numerous cities, featuring some key up-and-coming bands right now, including the likes of The Blinders and Blackwaters to name just a couple. “I saw the Blinders last week and they were literally blinding, they were amazing. There’s such a huge diversity of bands in the UK that potentially haven’t been discovered yet. People are definitely pushing boundaries.” 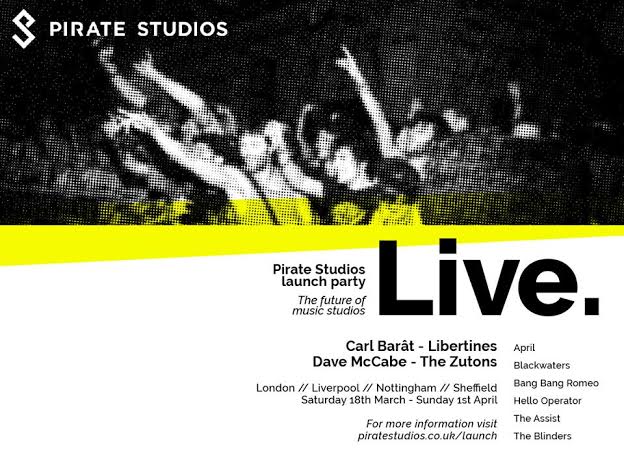 The celebratory gigs are also playing host to some stellar names, including none other than Carl Barat (London) and Dave McCabe (Liverpool). “I’ve got to say it’s absolutely unbelievable. Its nuts, it’s one of those things where you have to pinch yourself in the morning when you wake up,” Borrie states, evidently still finding it hard to comprehend. Not only are the studios backed by some huge names in the scene however, they are also supported by one of the most prominent promoters in the form of This Feeling’s Mikey Jonns. “We were incredibly lucky to meet up with Mikey at an early stage, the guy absolutely lives and breathes the live music scene.”

Although the studios have accomplished incredible feats since its beginnings, Borrie remains driven and focused, with the UK music scene at the forefront of his mission, “I want to give bands a new platform in which to perform to an audience, we’ve got loads of difficulties in the UK music scene at the moment which venues closing down,” David elaborates. “If we can give bands a new way of playing out to an audience that’s really exciting for me, that would be huge. That’s the dream for me.”

PREMIERE: Listen to Secret Company’s debut album ‘The World Lit Up And Filled With Colour’ exclusively first on Gigslutz

*PREMIERE* This Feeling Track of the Day : VEYU ‘Battlecry’