You were one of the first bands to play today, did you expect to be able to bring out so big of a crowd?

Jim: I saw the first band and was like; they’ve got a big crowd, oh shit…

Matt: We’d been getting a lot of people messaging though saying they couldn’t wait so we thought maybe it’d be alright. We never really know with Download because we haven’t played it that many times. In 2017 it was absolutely rammed and we managed to do that again, we love it here.

You’ve just completed a UK tour – because it was an album tour were you trying to keep it smaller and then save the bigger tour for later on?

Matt: Because it was more in stores to celebrate the release, the venues were smaller, the set was shorter. We’re sort of saving ourselves for the UK and Europe tour at the end of the year. We were giving people a taste.

How’s the reception of the album been?

Matt: So good, we’ve only had positive feedback, people are stoked.

Mike: It feels really different for this record.

Do you feel your sound has changed at all, especially for songs like Back Foot?

Matt: It’s not like we actively decided to have a different genre, we just kind of had fun with it and that weird song came out it.

Jim: Matt’s song writing spans across so many different genres, so for this album we thought lets curate the best songs, no matter the sound and just go for it.

This album definitely has a more emotional feel to it; did you notice that while writing it?

Matt: I guess we were just trying to put the best songs on the record so I just wrote a shit load and tried to give the best that I could give.

Mike: And all those were written at a time when it was quite emotional for the band.

Matt: A lot of those were written when we were touring solid and no one seemed to care about us and that can be quite an emotionally crushing thing.

Catch Dinosaur Pile-Up on tour at the end of the year. 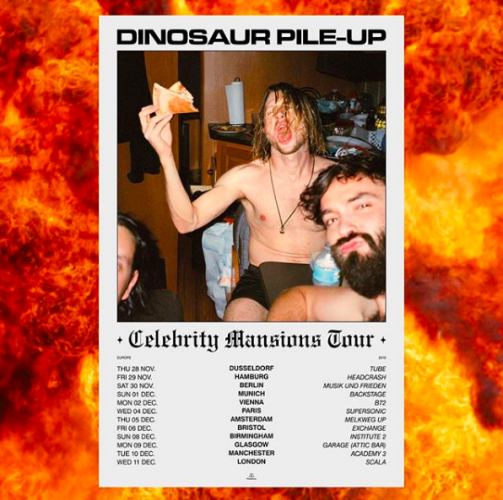 This Feeling Track of the Day : Gerry Cinnamon ‘Canter’