It is always a special moment when you stumble across a band and discover new music.  It is that incredible response between the listener and a band, when what comes out of the speakers fits like a glove. Recently unearthed is a band called Dress Thèque.  The Sydney based outfit is made up of Julian Wilkinson on vocals, Michael Thurbin, guitarist, keyboards and samples, Daniel Nutton on drums and John Wineberg, bass guitar and vocals. They released their debut album ‘Ascension’ back at the start of 2020. It is clear from the off where Dress Thèque’s influences derive from. It is a musical infusion of nineties Manchester, acid house and trip hop. The album is monumental in sound and is brimming with tenacious big beat psychedelic soundscapes, laced with samples, dreamlike vocals and anthemic guitar driven melodies.

We catch up with front man Julian Wilkinson from the band to find out more.

Q: Tell us a bit more about Dress Thèque and how it all came together as a band?

It’s evolved over quite some time. I started the band with Mikey just after I got out of high school, an age where Radiohead was God. I’d heard of Mikey through his sister in my year at school, and knew he was a Radiohead nut too, so I reached out to him and we pretty much became best friends straight away. After a year of writing and demoing I moved from our quieter beach town environment to Sydney and met Dan within a couple months. He was this charming and hilarious Yorkeshireman that we wanted in the band regardless of what he was capable of playing, but it turned out that he had this incredibly unique drumming style from a teenage obsession with Drum N Bass which became a huge part of forming our sound. It wasn’t until years later after a few different incarnations of the band that we hooked up with John, a DJ from Edinburgh on the Sydney nightclub scene. He was known for putting on Madchester & Brit-Pop nights, and we had begun to lean hard into that sound but were short of a bass player. So, it was a really obvious choice to get John on board, despite him not having played bass before.

Q: Throughout the album ‘Ascension’, there is a distinct sound of nineties Manchester and all its influences across the genres. What did you grow up listening to, what are the bands musical influences and for those who are not familiar with Dress Thèque, how would you describe the band’s sound?

My first ‘holy shit’ moment with music was seeing the film clip for Wonderwall on tv when I was 7 years old. I remember sitting there after the song had finished just gob smacked. So, I was always a big Oasis fan, and when I met Dan they were one of the first things I brought up because he was from Northern England. But he was completely uninterested in them at the time and slagged them off saying he had much better Manchester music to share. That was the start of him educating Mikey and I on The Stone Roses and Happy Mondays, which we just fell more and more in love with as time went on. I was also obsessed with Bloc Party when we started the band, I loved the way they fused live instruments and dance/electronica with such balance. I have been chasing that balance ever since. When people ask what we sound like, I usually say we’re ‘Kind’ve like Moby and Fatboy Slim, but if the songs were played by The Stone Roses.’

Q: There is the use of samples throughout the album which works incredibly well. What is the process in selecting these samples which adds another layer to the music and where do the samples get drawn from?

Samples have been a great extension of us giving a nod to the UK culture that inspires us – and not even necessarily related to music. The sample from All In All is an excerpt of a troubled teen being sentenced by a judge from the film Made In Britain that Dan had always raved about. Plus, the mood of the song already had quite an adolescent/angsty feel – like Fuckin’ in the Bushes or the first Kasabian and The Music albums – so that’s a great example of how a sample can solidify the mood you’re going for in a song. Whereas the sample in Football Music is a Manchester City chant, a way of acknowledging the influence Oasis had on the song. So, the samples are selected by whatever is appropriate, but we only use something that comes naturally. We won’t throw a sample on for the sake of it. 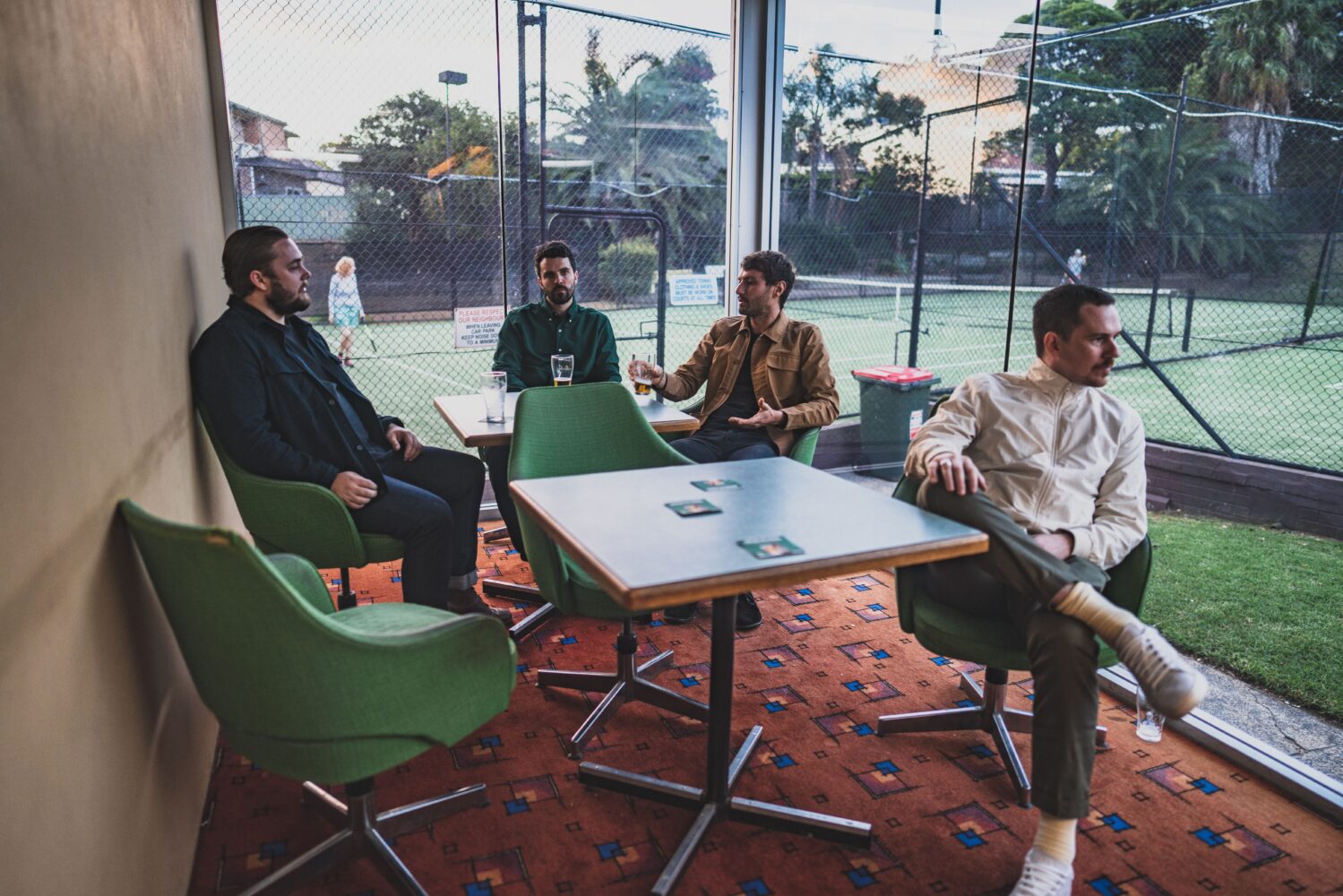 Q: What is your favourite song on the album and why?

Definitely Football Music, and I think the rest of the band would say the same. There’s not really anything you can do as a musician that’s completely new. All you can hope for is to connect a series of dots that no one else has done, yet still resonates with people. Football Music is easily our best example of working to achieve that goal.

The majority of what we record is produced at home. Often a song will start with Mikey messing around with chords and a hook, demoing beats and riffs in Ableton. Then he brings it to me and I structure it out into the shape of a song with lyrics and a melody. Usually once we get some momentum, everything else effortlessly falls into place like the synth layers and drones. From there we’ll bring it to the band in rehearsal to tweak and refine – where Dan and John enhance the rhythm section. That’s how our best songs have been written anyway, but there isn’t a set of rules for us.

Q: What is the driving force behind Dress Thèque?

I think we all felt a wealth of inspiration and ambition from the music we listened to growing up. There’s a sense of duty that comes with that, to give it to others if you’re capable. It’s also what we love. There is nothing more meaningful to us than making music.

Q: When we reach the light at the end of the tunnel and live music returns, are there any plans for dates in the UK?

Absolutely. We have talked about touring the UK far more than anything else as a band. Half our band is British, our favourite music is British. We know that Dress Thèque will make the most sense to those that live in the UK.

Q: Are you guys working on new material and if so, what can we expect in terms of sound and direction?

We are. We released Ascension right before COVID sent Sydney venues into lockdown, so we played the hand we were dealt and got straight to work on album 2. We were able to develop the songs in a fraction of what time it would have taken, had we spent more of 2020 playing shows. The next album is very much the second instalment – following on from Ascension – of what we see as a two part series like Kill Bill. Where Ascension had a more subdued approach, the next album will be a far more colourful, Happy Mondays like celebration of life. The yang to the yin.

Find out more about Dress Thèque in the links below: