Back in July Gigslutz’s own Elliott Homer sat down for an epic chat with punk-folk troubadour Frank Turner to talk touring behind his latest album Tape Deck Heart, his fantasy festival line-up as well as his own upcoming shows at the Reading and Leeds Festivals.

It was so long we had to split it into two parts! Here’s the first. Enjoy!

Good. Today’s a busy press day and everything’s busy generally but it’s good and it’s nice to have nice weather in the U.K. for once.

It is but you’re not going to experience it for long are you? You’re off to Austria pretty shortly.

Yeah, Austria and Poland and we’re driving which seems mad to me because our drive back from Poland is twenty four solid hours of driving which is making me right now feel a little bit… (Groans) It should be good though. Poland especially is a really fun place to play.

This is undoubtedly your biggest tour yet, how do you prepare for being on the road consistently until effectively December?

I pack clean underwear and bid farewell to my loved ones! (Laughs) I’ve done so much touring over the last few years I almost have to prepare more for being off the road than being on the road. I didn’t have my own place for about nine years until recently. Now I’ve got a place with some friends and my buddy Dave, who I live with, after a little while said: “Fucking unpack! You’re not in a hotel! You’ve got some cupboards in your room, put your shit in there and stop living out of a fucking suitcase!” I’m looking forward to touring. The thing about life on tour is sometimes I come off tour and I’ll ask my friends “How’ve you been in the last couple of months?” and they say “Same old, same old.” “Really? It would take me a week to tell you about all the shit that’s gone down since I saw you last!” To me, that’s exciting because you’re packing it in. Life is short. I like that I can have a year’s worth of anecdotes from one month on tour!

How are the new songs going down so far?

Good. That’s my validation of new material, how they’re received live. My career is further advanced in the U.K. than it is elsewhere, which makes sense as I’ve toured here more but because of that I probably spend fewer days touring the U.K. than other parts of the world, partly because it’s a smaller country and also there’s just more work to do in America. It means every now and then we come back and do a run of U.K. shows and I almost forget how fucking great it is to be playing the U.K.! In April this year we came back and did the album tour and we’d just spent four solid months in other parts of the world. We came back and Recovery had been on the radio while we were away. I’d been getting e-mails saying it’s on this playlist and that and some friends of mine were saying “I heard you on the radio today”, then we got back and played Recovery at the first gig in Manchester and the fucking place exploded! I said “Hey, they know this one!”

Right now the big dates on the horizon are the Reading and Leeds Festivals (23-25 August) where since 2007 you’ve been a pretty constant fixture.

Yeah, 2007 was the first year I did and then I did five years in a row. Bless them, the guys who run Reading and Leeds have been really great to me in my career and it means a lot to me because I grew up going to Reading as a kid and come on, it’s fucking Reading Festival. I don’t know about you but when I was at school there were Glastonbury kids and then there were Reading kids. I was definitely a Reading kid. Last year they said: “Look, you’ve got to take a year off, this is getting fucking ridiculous.” So I did, although I did then form Möngöl Hörde and play there anyway!

You just had to get your fix.

Yeah, exactly! They’ve invited me back this year and the slot we’ve got is mad. We’re on the Main Stage and we’re fourth from the top.  It’s funny, there are a lot of ways by which people judge success in the business which I work in and the most traditional one is record sales. I don’t want to belittle record sales as a measure, particularly when there’s someone from my record label sitting in the room! (Laughs) My personal validation is live gigs. When I think about the other bands that have played the slot we’re playing this year or some of the venues we’re going to or whatever, again that’s when I feel personally validated in what I do. 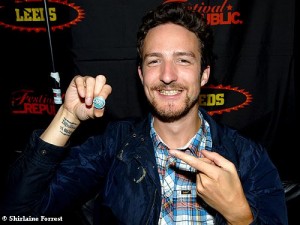 As a Reading and Leeds veteran, you’re in the perfect position to name your dream 3 festival weekend headliners. Who would you have?

Let me think about this… I’m gonna have Nirvana closing Friday night. Nirvana in the era just before In Utero came out. (Groans) This is tough! Saturday, I’ll have Springsteen and the E-Street Band and then on Sunday, if you don’t mind, I’m going to cheat and have The Band doing what they did for The Last Waltz! So you’ve got The Band, Joni Mitchell, Neil Young and everyone else who was there! That’d be one hell of a way to finish the evening off!

This tour has loads of headline shows including places in the U.S. you haven’t headlined before. Are you excited about that?

Yeah, I am. I love touring North America. As you know, being from the U.K., you grow up listening to rock ‘n’ roll music and America’s this kind of slightly fictitious place that bands come from and songs are about. You go there and you’re like “Wow, it’s real” you know? I’ve been touring the States for years now but there’s still part of me that gets very excited about being on a bus in America. I mean, I used to watch Almost Famous and get excited about it. The American tour we have in “the Fall” as they call it is really great ‘cause we’re covering almost all of the U.S.A., going back to the East Coast, the West Coast, Midwest, the South, all over the place really.

What are your international audiences like? Do you have any surprising pockets of fandom like Lionel Richie being big in Iraq for instance?

(Laughs) I don’t know about Iraq! Talking about Iraq, I was having a conversation with a friend of mine whose done gigs with a group called Alternative U.S.O., who are a bunch of soldiers who are essentially sick of Katy Perry, trying to get punk bands out to entertain the U.S. troops. Tim Barry from Avail was talking to somebody about doing a gig in the green zone in Iraq. I thought “Motherfucker I want to play there!” Just so it’s on the list of countries I’ve played! I’m not overly surprised we do well in Germany. I’ve toured there a lot. Last summer was lovely. We played in the Czech Republic for the first time ever and lots of people knew the words and loads of Czech people were saying: “Why haven’t you come here before?” I said “I don’t really know. I’ll come back!” I had the same thing in Spain this year actually, we were playing there for the first time in February, opening up for Dropkick Murphys and again everyone was crazy for it. It’s comforting to know that the internet works! To me, the fact that anyone that isn’t from southern England gives a fuck about what I do is pleasantly surprising.

Part two of this interview will be available soon only at gigslutz.co.uk

The latest single Losing Days is out September 1st.

For more information on upcoming tour dates head to frank-turner.com