With his album Herojuana featuring some of the biggest names in hip hop and a video for one of his singles causing a bit of a stir amongst the Native American community, US rapper/producer Emerson Windy has had an eventful 2014. With such an intriguing back story, which also includes donating a car worth $50,000 to charity, Matt Tarr had a chat with the man himself to find out a bit more…

MT: So tell me a bit about how you got into music; was music something you always saw yourself having a career in?

Emerson: I wasn’t a musical dude at all really. A few of my homeboys were rappers and they played me a little bit of their music. I offered some stuff to help them out, as far as production goes and it was a hobby, so every night I’d make music but it wasn’t really anything I wanted to do, it just happened that way.

MT: As you mentioned, you started off as a producer and later on began to vocal tracks as a rapper. How did you begin producing tracks for artists such as Snoop Dogg and Waka Flocka Flame etc?

Emerson: Everything with me being an artist and a producer just happened. I started to make beats and people were interested. I would always happen to know a person who was near an artist and it’s all about who you know not what you know. Especially in America with hip hop because you can be the most amazing artist in the world but if you don’t have the connections and the hook ups, you’re really not gonna to get too far, unless you got a lotta money!

MT: Do you feel the whole ‘it’s who you know not what you know’ statement is true for rappers too?

Emerson: Nah I would say it’s completely different cos as a producer I had to know people who could put me in front of those people as they’re really hard to reach. You can’t just message Snoop Dogg on Instagram and get a reply, that shit ain’t gonna happen! The man gets hundreds of thousands of submissions a day and everybody loves him so you’re not just gonna hit him up on a random thing like that, you’ve really gotta know somebody he’s around enough to respect their opinion. For rappers, the most important thing is a budget so that’s what you need a label for and if you don’t have a label then you really gotta have some money.

MT: So when did you decide to make the transition from producer to rapper?

Emerson: A few years ago my momma passed away from cancer and when that happened I had a lot on my brain. Til then I had never thought about being a rapper in my life, I’m a real private dude for the most part. I love people but before my momma passed I didn’t have a Facebook, I wasn’t on any of that stuff cos I was a hustler, I was in them streets. You really ain’t gonna find a street dude who has all that stuff with all the stuff I was up to. But when my momma passed away I just made beats all day and I just started to kinda hear the words. It was just an outlet at that time cos I was gonna go nuts cos that was like my best friend on the planet man, she understood me the best and I love her, you know. So it was an outlet and then it spiraled into what it is now in being my main thing.

MT: Your album is called Herojuana and it has been out for a little while now. What has the feedback been like from people?

Emerson; There has been a lot of awesome feedback from people saying they like the project. It doesn’t sound like what everyone is doing cos I can never really make up my mind; I bounce around a lot style-wise so a lot of the hip hop fans appreciated that I’m not just an artist who puts out the same thing every single time. I bounce around a lot because I was a producer before so I get bored with the same type of shit.

MT: On the album there are a number of features from some big name artists including Lil Wayne, Pusha T and 2 Chainz, so how did you go about selecting who you wanted to have featured on there?

Emerson: Well the main thing was I knew a dude who had a connection to the whole industry and he asked me what I was up to and he was the one who linked all that up. He played them a few of my songs and they liked it so they wanted to help out and give me a verse. It isn’t that I selected any of those dudes, they just offered to help me out with my project.

MT: Was that the same sort of thing with the producers on the album because there are also a number of high profile producers involved including DJ Mustard, Timbaland and Mike Will Made It?

Emerson: Yeah he would email me a beat from Mike Will for instance, I would write and email it back and boom, he’d make it all happen.

MT: Of the tracks on the album, have you got a particular favourite?

Emerson: I mean I would probably have to say ‘Black America’ or ‘Mirror Mirror’ because they’re the most honest. And when I say they’re the most honest, they’re the most raw. ‘Black America’ speaks on a lot of things that happened over here in the black community that I see. So it was almost me reporting on some news. As for ‘Mirror Mirror’, it’s honest because if you were to sit down and interview a bunch of the biggest hip hop artists in the world and you ask them “who is your top 5?” they won’t mention themselves. They’ll be like “ok, Eminem, Tupac, etc” but they all really wanna say “me!”. You have to feel that you’re great at what you do, it may not always be true but at least when you’re in the booth you gotta believe that you’re that dude!

MT: In terms of the track ‘Peace Pipe’, did you foresee any of the issues the track caused amongst the Native American community?

Emerson: Nah because I wrote the song ‘Peace Pipe’ and it didn’t really have anything to do with the Native American’s at all or I didn’t really have them in mind. The shit all hit the fan with the video, it wasn’t the song that pissed them off, it was the video and the fact I wore a Native American head dress. When I made the video, I went to a Native American owned and operated store and purchased all those items and I discussed with them who I was and what I wanted to do and asked if they would help me, so when I put the video out I didn’t foresee any of the drama because I was cautious of it in the first place. When the video went up and in a few hours hit a million views, that’s when the drama started cos a lot of people had seen it. I think it hit around fourteen million views in under a week and at that point it had gotten so out of hand, so I took a step back and thought about what I should do, so I apologised and removed the video. It was amazing to see how awesome they were to me afterwards, they were really on my side because they could see that I’d made a mistake but I couldn’t ignore the fact that it had bothered people. 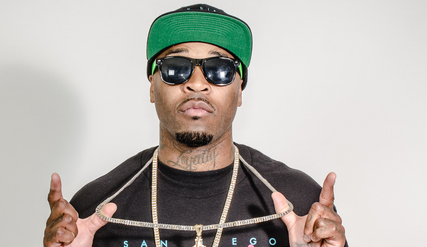 MT: As a person you’re very much a philanthropist and support a number of causes. Tell us a little bit about that side of your work.

Emerson: The biggest one right now is the Stop Homelessness thing because homelessness is an issue that affects the whole world and my goal with that is to show people that there are small things that you can do to change the whole situation. Everyone always has it in their heads that you’ve gotta go and donate a bunch of your money or a bunch of your afternoons over at the soup kitchen but it’s not really like that. It’s something as small as if you see a homeless man who’s hungry and he doesn’t have anything to eat, if you’re going to a fast food place, buy him a cheeseburger it’s less than a dollar and you will have done so much to uplift that dudes spirit you might have gotten him through a couple of days. The other one is Cancer, which obviously affects a lot of people and it obviously affected me pretty hard with my mother and then I found out a year ago that my father has it now, so I wanna do anything I can to combat that. I gave away a fully restored ’63 Impala worth about fifty grand to help the people!

MT: Is there an artist or band who you’re a fan of that no one would expect you to listen to?

Emerson: I like metal man! System Of A Down, I’m a big fan of them! I fuck with those dudes man, they go hard. If I’m in that mood I’ll stay on that for a couple of weeks and I’ll play all their albums so they’re probably my favourite. I’ve always been a Beatles fan but I think everybody is really. I like Hendrix too so if I’m in that mood I vibe with all of that.

Emerson: A whole lot more music and videos, shows, a little bit of everything. I would love to be over there in the UK but that’s all on ya’ll really. I’ve gotta build up a fan base there first and then when a promoter hits me up I’m on a plane! It has always been a dream of mine to go over there, I’ve had a few girlfriends from over there but I’ve never been. I was always in some shit where I wasn’t sure if I was allowed over there but everything’s all good now so we’re comin!