JAWS are Connor Schofield (vocals/guitar), Alex Hudson (guitar), Jake Cooper (bass) and Ed Geach (drums). Over the past 2 years the chilled-out summery Birmingham 4-piece have being treating us with singles such as ‘Stay In’ and ‘Gold’ and have found themselves on the soundtracks of shows such as Hollyoaks and Made In Chelsea (and even the MIC game) which has earned them a large and growing following. Ahead of the release of their debut album Be Slowly next month we caught up with frontman Connor to talk about the album, their upcoming tour and Justin Bieber. 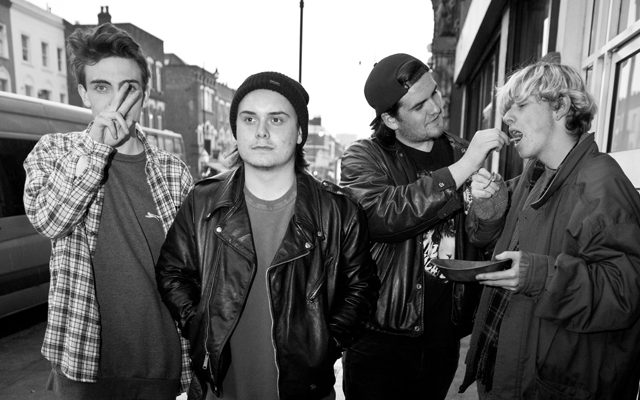 GIGSLUTZ: Hi JAWS, what have you been up to recently?

Connor: Just prepping for the album release; a lot of practice to make sure the new songs are ready for the tour.

With the release of the new album looming, what can people expect from Be Slowly?

Ermm, I never know what to say when I get asked this. There’s more guitars than in our older stuff – it’s a bit heaver/darker.

You’ve been labelled with the genre surf-pop, is that a style of music you’ve always been interested in?

I am aware of this genre and I do like music from bands like Beach Fossils or Surfer Blood but I wouldn’t say JAWS is a surf pop band.

You’re back on the road in September, are there any particular dates you’re looking forward to? Is there anything special in the pipeline for your live sets?

Every show is going to be special just because we get to show people the album live. Some of these songs have been in the practice room for so long we really can’t wait to play them.

What was the first gig went to and first album you bought? Do you think they acted an influence in your music today?

Haha! The first gig I went to was Panic! At The Disco at the Civic Hall in Wolverhampton and my first album was Enema Of The State by Blink 182. Blink 182 are 100% a huge influence on me. I wouldn’t have started playing drums if it wasn’t for Travis Barker and when I got bored of that I wouldn’t have picked up a guitar if it wasn’t for Tom DeLonge.

What’s the most embarrassing song you have on your iTunes?

I don’t think it’s embarrassing because it has an awesome bassline but yeah I have Justin Bieber – ‘Beauty and A Beat’.

The majority of your releases have been predominantly on coloured vinyl. Is keeping the physical side of music something you’re passionate about?

Oh yeah, I have a big vinyl collection. I think it’s important to keep music physical.

With ‘B-Town’ having been a pretty big deal for the past year, do you think the Birmingham hype will ever die down? Which newly emerged bands should people be checking out?

Of course it will eventually but you have to remember that Birmingham always has and always will have amazing bands. Right now there’s some cool bands some of my favourites are Garden, LIME and DUMB .

Hopefully the album does well and we can tour a bit more and play some places we’ve never been too!

JAWS’ debut album ‘Be Slowly’ is out September 15 and is available for pre-order here.