Gigslutz sits down with singer songwriter Robbie Boyd to talk about the new single, plans for next year and burning hopes and dreams.

Robbie Boyd is warming up with a cup of tea ahead of his final show for the year at Hoxton Square Bar and Kitchen. The Nova Christmas showcase gig rounds off a jam packed year including the band’s debut album launch, world tours and sold out dates at their last four London shows. Gigslutz catches up with Robbie on plans for 2015, the new single ‘Brave’ and more. 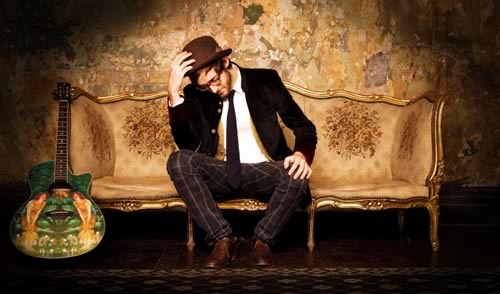 Claire: This is your final show for 2014. What are your plans for next year?

Robbie: My plans for next year are to write a lot more songs with a lot more people and hopefully keep releasing singles at the same time and maybe combine it in album. Other plans include a tour of Spain, Italy and Germany and I’ll be going to Norway and America. So yeah, it is going to be a real busy year.

Claire: How do you feel about your achievements to date?

Robbie: I am very proud, very proud. I have performed on This Morning and ITV and have been played a lot by Graham Norton and Radio 2. I have supported some big bands and toured the world and released an album and yeah it’s going well.

Claire: Why is the album called So Called Man?

Robbie: It’s the last lyric on the album in the last song called ‘Never Never Land’, which is about following your dreams and So Called Man just seemed kind of appropriate after seven months of searching for a title.

Claire: What are your burning hopes and dreams that you haven’t realised yet?

Robbie: I guess it’s just to keep playing to as many people as possible in as many countries as possible. That’s always been my aim and writing and co-writing with as many great artists as I can plus writing more collaborative material with as many artists as possible and write many more good songs.

Claire: Can you name one seminal album that has influenced you musically and why?

Robbie: I guess Johnny Flynn’s A Larum is one of the first albums that I listened to that really inspired me to do what I do. Yeah, I really love that album. There’s just something about it. I was singing along to all of the words and just felt really inspired and I loved his sound. Yeah, I just can’t quite say what it is. It’s just very authentic, very vivid.

Claire: The new single is called ‘Brave’. What is the bravest thing you have done lately?

Robbie: The bravest thing I have done recently is basically busking outside Passenger’s show. I went to promote their show. I just love doing that you know, playing to a similar crowd, playing to an audience that likes a similar sort of artist. It was pretty brave but I managed it.(laughs)

Claire: You are known for writing heartfelt, serious songs with an uplifting sound. What has given you your positive outlook on life?

Robbie: I guess I am just a naturally optimistic sort of person. Sure, I mean I have had great support from my family and have great friends. I have lived a pretty fulfilling life. I feel privileged to be able to say that and very blessed to have lived the life I have. I don’t know I just, I like being able to connect with people and show people positive messages. I mean, there’s enough negativity floating around the world, especially in London and England. It’s good being able to spread the love.

Claire: I really like ‘Less Then Friends’. What inspired this track?

Robbie: Thank you. I wrote that song pretty quickly. It was a real unrequited love situation where I put myself out there to this girl I really liked and she didn’t even really allow me the opportunity to tell her that I liked her and, you know, she stood me up on a date, so I wrote it in about half an hour or something. And, yeah, when that middle eight bit comes in with that “waiting, waiting, waiting in the wings”, I guess that’s the sort of hopeful side. It’s an example of the hopeful spin that I put in my songs I guess. You know, the song is pretty sad.

Claire: I have seen details of the So Called Man living room gigs on your website. Is it a joke?

Robbie: I have done loads of living room gigs. No joke. I guess it’s just kind of a crowd funding thing. Yeah, it’s my own interpretation of the crowd funding thing. You know, playing songs in your fan’s houses, where everyone knows every one of your songs and all of the lyrics, it’s just amazing. It’s an amazing feeling and to have that as your job as well, is an even better feeling. 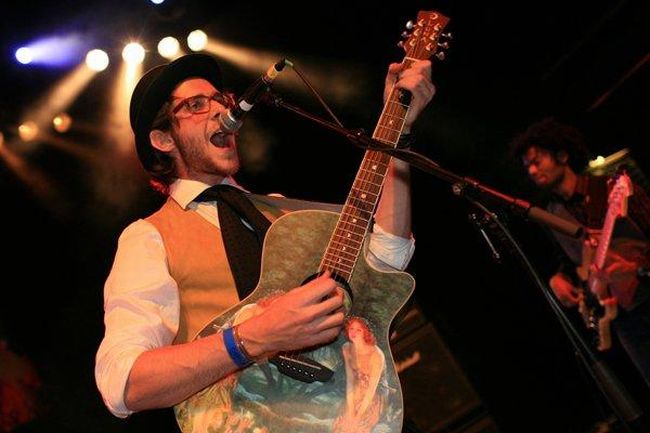 Claire: What’s been your favourite living room gig then?

Robbie: I think the last one I did was in Germany, while I was on a 2 week tour over there and one day was a living room gig and there was like 30 people crammed in there and they all knew every word of the songs and it was amazing, really amazing. I think it’s becoming quite a popular sort of thing to do and it’s really special. I love the unplugged, acoustic vibe as well.

Claire: What is your favourite gig venue in London?

Robbie: Shepherds Bush Empire was a really big indie venue that I played at. I love all of them in London like Bush Hall, that was great, The Garage, where we played in May. I played at Scala as well and that was great.

Claire: What part of London are you from?

Robbie: Olympia, in Shepherds Bush. Currently, I am a bit of an ‘eastie’ in Stoke Newington.

Claire: Do you have any advice for budding singer-songwriters out there?

Robbie: Yeah, you know, just work on your craft, do as much as you can. Do as many gigs as possible, wherever you can do them and just put in the hours basically and be dedicated and believe in yourself. If you have got the talent it will shine through and just don’t give up. Take every opportunity that comes up and keep going.

Claire: What are your Christmas plans?

Robbie: Just relax. Also, I have got some more song writing and co-writing sessions with different people. Hopefully I will be writing with Jake Isaac and a couple of other cool people. I met a lot of people when I was in Nashville. I love keeping my options open and that’s the other good thing about doing as much as possible as it gives you more options.

Claire: What is your favourite Christmas song?

Robbie: Right. Well, I was actually listening, rather embarrassingly, to Magic FM earlier today and basically I heard a song by Louis Armstrong, at least I am pretty sure it was him, and it was a Christmas song and I have never heard it before and I loved it and I was shocked as to why I didn’t know it and why it isn’t a staple Christmas song.

Claire: What is the name of the song?

Robbie: I don’t really know to be honest. It’s a song about Santa and I think that’s my new favourite because I hate Christmas songs sometimes. I will find out what it’s called and put up details on my website.

Claire: I notice that you have been drinking a lot of herbal tea tonight. What’s your favourite?

Robbie: Yeah, big fan. My favourite is probably this one, Yogi tea. It’s got liquorice and fennel in it. I have become a bit of a diva, being a singer. (Laughs) It’s great and it has all these little philosophical messages on it like “You are unique” and “Yoga is self discovery”.

Thanks for the interview Robbie. Have a great gig tonight. I’ll be there.

Thanks very much. It was a pleasure. Hope you enjoy the show. See you in a bit.

Claire Grant – Gigslutz Bio Claire Grant is a London based freelance music journalist who has been to some amazing gigs. Early musical likes include The Smiths, The Cure, Billy Idol, Velvet Underground and The Jesus And Mary Chain. With her wide ranging and eclectic musical tastes Claire is always keen to find out about new artists and is very fond of the birthday present mix tapes from friends over the years. ‘’If music be the fuel of happiness then keep on burning’"

Claire Grant – Gigslutz Bio Claire Grant is a London based freelance music journalist who has been to some amazing gigs. Early musical likes include The Smiths, The Cure, Billy Idol, Velvet Underground and The Jesus And Mary Chain. With her wide ranging and eclectic musical tastes Claire is always keen to find out about new artists and is very fond of the birthday present mix tapes from friends over the years. ‘’If music be the fuel of happiness then keep on burning’"
View all posts by Claire Grant →

The Greatest Bootlegs Ever, Vol. 1