Since the creation of the limited monster hardback edition of Soul Deep Adventures With The Style Council by Stuart Deabill, Ian Snowball and Steve Rowland the word on the street in regards to the band has exploded like never before. The first edition of the book was met by vast applause from all quarters even core members of the band were seen to be lapping up the pages.

“Congratulations on a great book!”

Extensively researched with many unseen pictures, memorabilia and memories from fans who were there at the time, those that wished they were there and those that simply continue to enjoy the timeless music produced by the band, this bevy of action has now lead to the book receiving a welcome 2nd edition, this time on paperback.

One of the main creators of the book, Stuart Deabill, has been speaking to Gigslutz regarding the 2nd edition and what fans are going to expect in the refreshed edition.

Hi Stuart since we last spoke the hardback edition of Soul Deep on Kickstarter seemed to literally explode with excitement from fans, is that the reason for a 2nd soft back edition?

Demand. The last thing we expected was to sell out before we went to print. It took us all by surprise. And once the documentary happened and the books finally landed, after a very stressful couple of months, people wanted it in a way I’ve never seen before with any of my previous projects. For once I wasn’t selling my soul to sell the product.

What’s the reason for a second print? Weren’t you happy with the hardback edition?

No, i think the book apart from the odd typo and a couple of factual errors, near on perfect. And that’s not me larging it, it’s the only time I’ve ever been totally happy with the end product. Steve did an amazing job on the design and with help from a lovely fella called Rob, the book became something far more stunning than I could have first imagined.

Has more material that has come to light?

Yes, an interview with Dee C. Lee and Martin Freeman has done a great piece about his favourite TSC B-Sides.

Will there be any noticeable differences from the hard back edition to the soft back edition?

It’s pretty much the same other than we’ve dropped a couple of spreads and Steve’s improved a couple of the layouts. Same size, page count, full colour etc

Will the softback edition be limited print?

Yes, it’ll be a minimum 1000 copies. If we have extraordinary sales during May, we’ll increase it.

Will the softback edition be in b/w or colour?

“Probably the best book on The Style Council in the world… and my gratitude for a lovely piece of work!”

When is it out and where will it be available to pre-order/purchase from?

Soul Deep is available to pre-order from www.ourfavourite.shop and the book is out in August.

There’s also a book launch in Guildford on the 19th August. Tickets are available here

Will it be a kickstarter project again?

Do you think this will be the final print of the book?

Yes. All 3 of us are working on different long term projects as we speak, so this edition will be the last.

Were you chuffed to get endorsed by Weller, Talbot, Lee and White for the hardback edition?

Amazing. Paul and Mick especially. Both really went out of their way to let us know what they thought and we were just glad they approved. We never take anything for granted, even though I knew we’d produced something a bit special.

Were you pleased to see the band reform for the Long Hot Summers documentary?

Lovely wasn’t it? I can’t believe (Mark) Bax(ter) kept it secret for so long!

Predictably the new PW album Fat Pop, which is another winner and loads of 70’s Dub. Massively into the Front Line Box Set Compilation which a mate bought for me a while back. Oh and a new band called Pastel who haven’t released anything physical as yet are ones to watch. Check ‘Deeper Than Holy’ on your favourite rip off streaming platform. 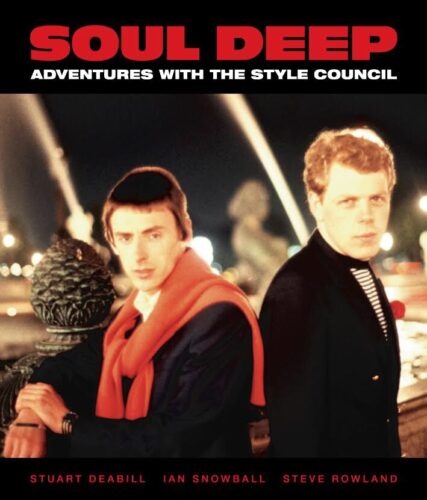 The press release reads as follows:

The acclaimed, elegantly illustrated book on the innovative, modernist collective led by Paul Weller and Mick Talbot will be released in softback form in August 2021.

The hardback edition sold out on pre-orders alone last year and now fetches up to 10 times its original price on auction sites. The authors, who self-published, have decided to release a second edition to fulfil the demand.

This is a beautiful and glossy 304-page celebration of one of the most loved (and misunderstood) bands of the 1980s, The Style Council. The book covers every aspect of the group’s career in fine detail, with written and photographic accounts from both the musicians and fans.

Every single, album and tour feature with insights from founder member Mick Talbot, drummer Steve White and vocalist Dee C. Lee, as well a host of honorary councillors who played with the group between 1983 and 1989.

All the record sleeves and press advertisements are documented by the group’s art designer, Simon Halfon, who provides valuable insights into the ideas behind each iconic image and cover.

We also feature the fans’ stories and reviews of what TSC meant to them. The music, the social history, the personal situations and the lasting influence.

With new interviews and pieces by vocalist Dee C. Lee and actor/superfan Martin Freeman, and a striking front cover, this continues the authors’ vision to keep the book fresh and exciting.

The book is limited to 1000 copies and is available to order now from www.ourfavourite.shop who will ship worldwide.

The first 250 books ordered will be signed by the authors.

There is also a book launch at Suburbs, Guildford, on Thursday 19th August where there’s a Q&A with the authors, a surprise special guest and a book signing.

Tickets are £7.50 and available from the following link

This Feeling Track of the Day: Louis & The Shakes ‘Losing My Mind’